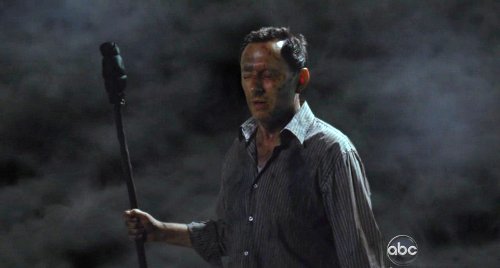 This is going to contain spoilers for the April 8, 2009 episode of LOST, “Dead is Dead.”

Now that we’ve got that out of the way.

I’ve been thinking about Ben’s line to Sun, about how if she ever meets Desmond again, he wants her to tell him he’s sorry, and that he’ll know what for.

Wouldn’t it also make sense for him to apologize to Penny, the person he actually tried to kill?

Obviously the storytelling reason is that if he’d said, “Desmond and Penny” instead of Desmond, we’d have known for sure that he failed before we saw the flashback to the actual event. (We still don’t know for sure; he could have gone back later to finish the job. I really hope he didn’t, because I’ve been hoping since we saw him make that phone call four or five episodes back that the reason would be exactly what we saw tonight: he shows up to kill Penny, but Desmond stops him and beats the hell out of him.)

But what about the reason in-story?

I figure there are three possibilities:

Of course, Ben is both a sociopath and complete f—ing a—hole, so at this point it’s anyone’s guess.