People are still arguing over whether the Lost castaways were “in purgatory the whole time?” The finale was very clear on that: everything on the island happened. The afterlife didn’t come into play until the final season.

That last season featured glimpses of what looked at first like an alternate timeline in which the plane didn’t crash. It turned out to be a shared afterlife experienced by everyone who had ever been to the island, once they had all died –- some of them during the show, some years later, as Ben and Hurley acknowledged when they regained their memories. And that wasn’t a state of purification so much as a gathering point, so they could all meet again before moving on, because what they’d done and experienced on the island had been so important.

The finale may not have answered every question, but it spelled that one out pretty clearly. 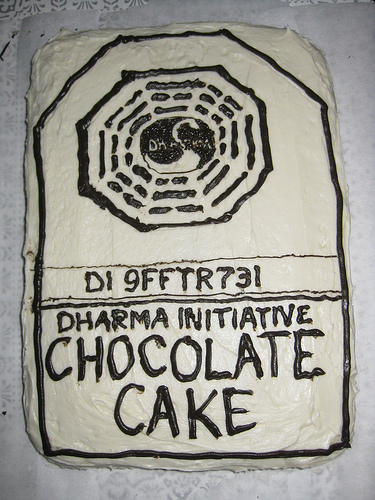 Remember the Battlestar Galactica cake? For last night’s LOST finale, Katie made an authentic DHARMA Initiative chocolate cake, and pizzas with the Swan and Orchid logos.

The cake is chocolate, with homemade buttercream icing (vanilla for the background, chocolate for the design). The pizzas have an outer ring of sausage, with bell pepper strips for the I Ching. The Swan logo is cut from a bell pepper. The Orchid is cut from a tomato, and placed on the pizza after baking. 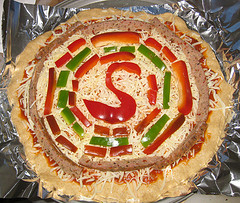 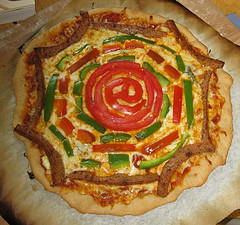 For more views, including in-progress pictures, close-ups, and making-of commentary, check out the LOST finale food photos on Flickr.

Here’s my theory on LOST’s weird commercials: They figure that anyone still watching the show after this long doesn’t need to be convinced to watch the next episode, just told when it’s on. So they might as well have fun with it.

The final season of Lost is off to a good start. They found a way to follow through on the cosmic reset button that didn’t bug the heck out of me, explained some things, and set up an intriguing direction for the final arc. It will be really interesting to see how the two narratives relate.

The only downside is that it looks like ABC has decided to throw Better Off Ted under the bus. I was really hoping that it was only preempted for the two-hour premiere, but there’s no sign of it next week. It would be nice if they’d at least let the show finish out the season.

Also: really angry at ABC News’s scare tactics of “OMG Al Qaeda intends to attack us!” Um, yeah. We knew that. We’ve known that for over a decade. We’ve known that since before 9/11. Trying to scare your viewers into a panic at every commercial break is not what I’d call responsible journalism.

END_OF_DOCUMENT_TOKEN_TO_BE_REPLACED

With the final season of Lost launching in just a few weeks, Amazon has put the first five Lost seasons on sale through February 6. And I mean on sale. As in $20 per season for the DVD sets, and $35 per season for Blu-Ray.

I’ll probably wait a year or two for the inevitable full-series boxed set, but it’s tempting.

(via DVDs Worth Watching)