After last weekend’s trip to storage, I was planning to re-read Greg Keyes’ Kingdoms of Thorn and Bone series, until I remembered that the new Wheel of Time novel, The Gathering Storm (why, oh why did they have to pick such a generic title?), comes out next week. Not the best time to start a four-book epic. 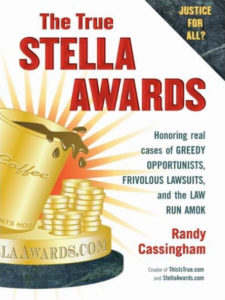 So I rummaged through the to-read box this morning, looking for something to bring along and read at lunch, and settled on The True Stella Awards. I picked it up when it was new, four years ago, but somehow never got around to reading it.

The nonfiction book is by Randy Cassingham, author of the long-running This is True newsletter, and is a collection of write-ups of frivolous lawsuits. It’s named after an email forward that used to go around with the title “The Stella Awards” (only that used made-up lawsuits like the one about the guy who supposedly put his Winnebago on cruise control and went into the back to make a sandwich). That list was named after Stella Liebeck, the woman famous for suing McDonalds after spilling scalding hot coffee on herself. Cassingham decided that using fake examples to illustrate a real problem was counterproductive, and started a newsletter featuring real cases of legal abuse, eventually making it into a book.

It’s been interesting to see which cases have been included. One of the first examples was a 2003 lawsuit against Nabisco for using trans-fats in Oreos (they’ve since been reformulated, IIRC)…which was dropped as soon as the filer had racked up enough publicity.