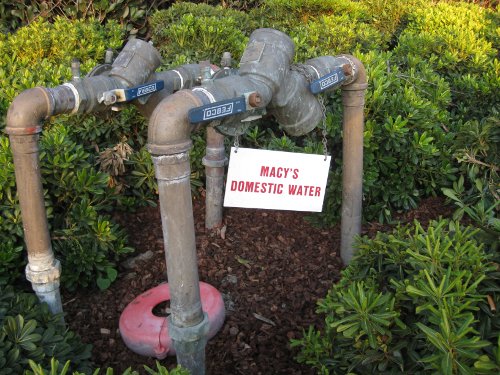 We made our first Christmas-season foray into South Coast Plaza over the weekend. Well, really, we just walked over there to grab something at the Coffee Bean after a late lunch at Finbar’s at Metro Pointe, then walked back…but it was a taste of the holiday insanity of the mall. Especially that mall. (Usually I try to avoid it during the holiday season, but I always seem to end up making at least one trip.)

Anyway, the phrasing on this sign just struck us both as odd. Okay, obviously, these valves control the water for Macy’s, which was right on the other side of the shrubberies. But why Macy’s domestic water? Is there another pipe for foreign water?