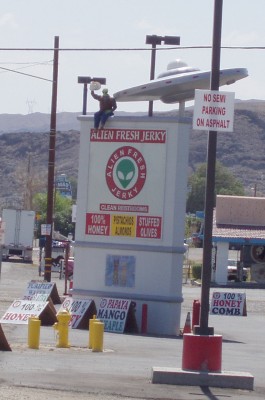 We were staying at the South Coast Hotel and Casino, the latest megasino to open, which is a bit off the strip. At first I was a bit worried about finding the right exit. As it turns out, it’s the first giant hotel you’ll see as you approach Las Vegas from the south…about two miles before you actually have a chance to get off the freeway! (They have a free shuttle to the strip, though that had its own share of problems.) They put us in a room on the 24th floor, which had a great view of suburban South Las Vegas. 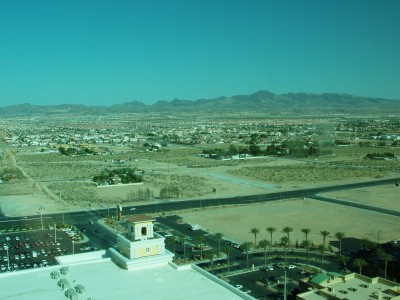 And then there was what we found in the nightstand. Something about this combination just screamed “Las Vegas.” 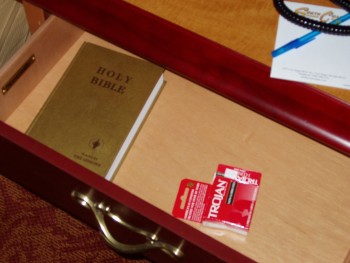 One thing that constantly amazed me was the number of brand tie-ins in the casinos. The slot machines we saw were mostly video-based, which makes sense: you can change the theme by changing the sign and loading new software. But who would expect to find an I Dream of Jeannie slot machine? Or Alien? Star Wars just floored me. And I’m not sure I’d trust a Terminator slot machine! But the weirdest one had to be the Tabasco Sauce Slots: 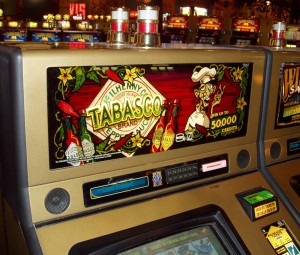 Later on, we saw one of these in a kiosk labeled “Hot Slots,” but the photo was too blurry. That, and the slot machine in question was showing a Windows desktop and a command prompt instead of a slot matrix. (Hmm, now that I think about it, I wonder if this has anything to do with the high concentration of Windows installations that failed WGA validation in southern Nevada…) 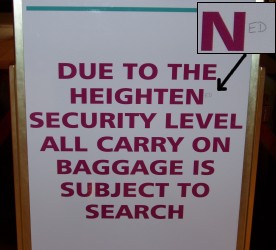 We rode the Las Vegas Monorail a couple of times (more on that later). On Sunday, we noticed this sign outside the monorail entrance at the MGM Grand, advising us that they might search us due to the “heighten security level.” Someone had helpfully filled in the missing letters. As for the reason for the security: on Monday, our shuttle driver pointed out Air Force One sitting on the runway as we passed the airport. What are the odds of accidentally planning a vacation for the same week the President comes to town?

The main floor of New York-New York (AKA NY,NY,LV,NV)is done up as a Disneyland-style representation of the city. Off in the food court area, there’s a street sign that looks like it might be combining an early captain of the Enterprise with the captain of Babylon 5. That certainly looks like Christopher Pike and Sheridan to me… 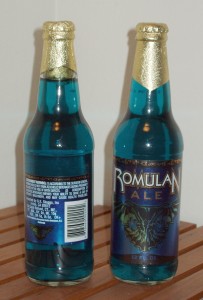 Speaking of Star Trek, we did check out the Star Trek Experience and “Borg Invasion 4-D.” (We’d done the Klingon Encounter back when the other ride was the “Star Trek Experience.”) We passed on Quark’s this time, but discovered the gift shop sells Romulan Ale. The display proclaimed that they had just been smuggled across the Neutral Zone. We haven’t tried it yet, but we did pick up a couple of bottles for the heck of it.

Update: I forgot to include this one. We rode the monorail to and from the Las Vegas Hilton. While we waited or the train back to the strip, we grabbed a bottle of water at one of the vending machines. They’ve actually branded their bottled water as Monorail Water!

Another fandom tied into this sign on our hotel grounds. Don’t worry, Harry Potter fans: Neville has to make it through Book 7—he opens up a landscaping company!

Admittedly, Vegas is the land of (con)fusion, but we couldn’t quite figure out what to make of this one. It seemed to be a higher-class version of Taste of China: Hot Dog Heaven. 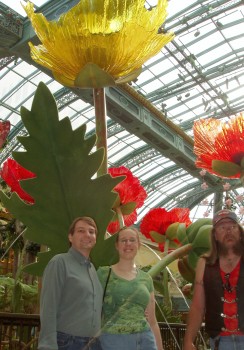 The Bellagio has a conservatory filled with topical plants, giant sculpted flowers, and large animal sculptures lined with flowers like Rose Parade floats. It was a very popular place for taking photos. Unfortunately, this fact was lost on many of the people not taking or posing for pictures, as you can see from the biker dude who wandered into the frame here. The woman taking our picture asked to see this one after she snapped a second, biker-free version, so we figured it was worth hanging onto for the humor value.

And finally, no geek trip would be complete without checking out the local Fry’s. We were kind of disappointed that the theme didn’t persist through the interior of the store, but the giant slot machine out front is hard to miss. 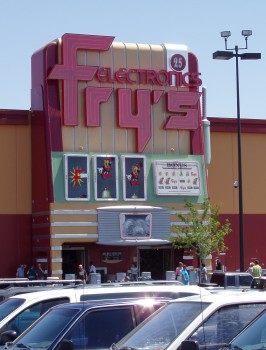 5 thoughts on “Only in Vegas”