Last weekend, we made our third trip to San Francisco’s WonderCon in as many years. While it was fun, it wasn’t as enjoyable as the last two years.

We only really planned on going Saturday, but I was half-hoping we’d get there in time to catch some of Friday afternoon. That…didn’t work out so well.

Saturday morning around 11:30, we walked down to the Moscone Center in surprisingly clear weather (it was supposedly 50°F, but the sun was warm enough that a T-shirt was just fine), followed a series of people giving directions, and breezed through the line to pick up our badges. I think we were on the main floor within 10 minutes of entering the building. 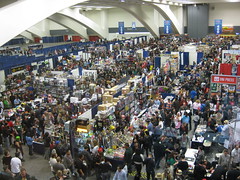 The convention seemed more crowded than I remember last year — despite the move to Easter weekend. There were places on the main floor where traffic just stopped. The mezzanine balcony, which I remember being a relatively empty traffic corridor last year, had somehow become a popular hang-out spot and photo-op location. Several panels proved to be too popular for the rooms they’d been placed in. People were even lining up three hours ahead for Geoff Johns.

It’s not a San Diego-level crowd yet, but it’s getting denser. Fortunately they still have room to expand. They’re only using two-thirds of the main floor space. 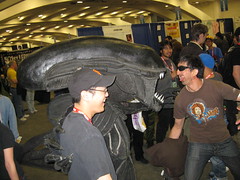 Still, they could really use some more seating out in the lower lobby with the food services. In three years, I don’t think I’ve ever sat at a table for lunch at this con.

Neither of us noticed any obvious costume theme. Two years ago the place was full of GI Joe costumes. Last year it was Watchmen. This year nothing really stood out. I don’t think I even saw as many steampunks as usual. Admittedly, I no longer really notice people in Stormtrooper, Mandalorian, or Jedi outfits, so they could have had the entire 501st Legion wandering around and I wouldn’t have noticed.

You can see all of my photos of the con on Flickr. 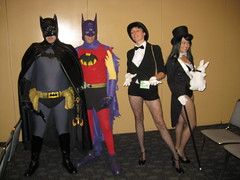 Since I’d missed the DC and Geoff Johns panels on Friday, I went to the DC Editorial panel (covered at Speed Force). Instead of being an actual presentation like last year, it was an hour and a half of question-and-answer. Unfortunately, the timing blocked several other things I’d considered attending, and I’m not sure it was worth it.

Never Give Up. Never Surrender

The best panel either of us caught was the mock Galaxy Quest “23rd Anniversary Celebration” that Katie attended. The panelists made a point that it was actually the 30th anniversary, as we were all there to celebrate our love for the original show and not “that movie,” and the original airdate was several years earlier than non-Questarians reckoned. And it went from there. The audience members who came up with the best answers to “trivia” questions about the original show were rewarded with t-shirts for the upcoming “Next Generation” show (it was apparently picked up for a full season!). There was a lot of speculation about how the new version might go too far in being Darker and Edgier, or that someone had heard there might be a movie with all younger-and-hotter actors and more lens flares than plot. Essentially, a free-for-all to both lament and celebrate the current state of SF media productions. 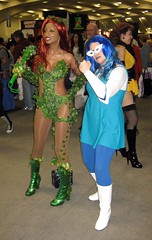 Several panels were canceled when presenters couldn’t make it. The Comics Arts Conference session on “Urban and Political Mysteries” had to replace two of its three presenters. The reexamination of Batman: The Long Halloween went on as scheduled, looking at the evidence without taking the confessions at face value. Rounding out the timeslot were an examination of different narrative ways to make the shift from Silver Age to modern storytelling, and the comparison of Wonder Woman to Canadian heroine Nelvana of the Northern Lights.

Another casualty was the Real Archaeology of Indiana Jones, which I caught last year, but Katie missed because it was opposite a special-effects makeup demo. She was hoping to catch it this year, and I was kind of curious as to whether he’d be covering anything different this time. 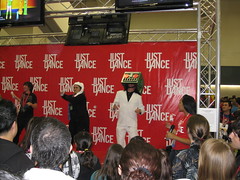 I think part of the problem I had with the con this year was that I didn’t really have any goals in mind. I wasn’t looking for any books. I didn’t have a huge stack of items to get autographed (partly because I didn’t want to carry around Comic Book Tattoo, and partly because I didn’t get around to looking through the guest list or my recent acquisitions). My to-do list consisted of one panel and a couple of artists, and was basically done by 2:00. Usually I make at least one full pass through the main floor, but this time I just kind of wandered aimlessly.

Around 4:00, Katie called me to tell me that her costume shoes had practically killed her feet (she had a really nasty blister, too), and she was ready to go back to the hotel — but couldn’t imagine walking even the short distance. I picked up her sneakers, and then we both went back for takeout and Lord of the Rings. (Thank you, TBS, for your conveniently-timed marathon!)

Hotel: Staying at the Marriott 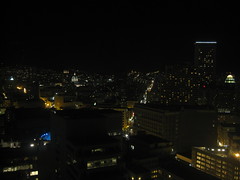 I think this is the first time I’ve stayed at an actual headquarters hotel for a convention. For the most part, we didn’t notice…except for the Power Girl/Terra photoshoot we saw in the atrium Sunday morning.

The Marriott Marquis is just a short block away from Moscone South, and across the street from the Mosser, where we stayed last year. The rooms are a more typical size, though, and of course the building is more modern. Oddly enough, the Mosser is a better choice for Internet access. The Marriott has free wifi in the lobby, but the rooms are wired only — and they want $13/night for it! (We mostly went without, and just ran down to the lobby for uploads and downloads.) 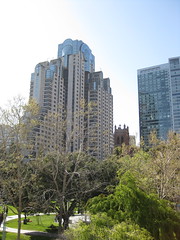 Restaurants: We were disappointed to find that Mission Steak is gone — or, rather, has been converted to “Mission Grille,” which had a decent enough brunch, but isn’t open for dinner anymore. Despite what the outdated ads in the elevators said. The concierge assured us that the other bar-restaurants in the hotel were open for dinner hours and would serve full meals, but neglected to mention that the 4th Street Bar and Deli had just been closed for renovations the day before. The menu at The View lounge didn’t seem much bigger than a typical bar menu either, the $19 Kobe cheeseburger notwithstanding. The view from our table was a wide city panorama, rain-soaked in typical San Francisco fashion, and we got to watch the fog slowly thicken until the Bay Bridge towers were just hints in the mist. (The picture window with its radial supports reminded me of the Gotham Clock Tower, but apparently it’s become known as the Death Star Bar.) We didn’t visit Bin 55, as neither of us is a wine drinker and their food menu is half the size of their wine list.

One thought on “WonderCon 2010 Experience”