We spent Saturday at WonderCon in San Francisco, the first time either of us had attended the convention. It’s run by the same people as Comic-Con International, but it’s more comics-focused and considerably smaller. Which is not to say that it’s tiny, and the floor did get crowded in the middle of the day, but it was a much less stressful convention than San Diego tends to be.

Update: Photos are up!

The trip to San Francisco was spread over several days during which we stopped at various tourist traps and visited friends. We got into town late Friday afternoon and spent the evening visiting family. 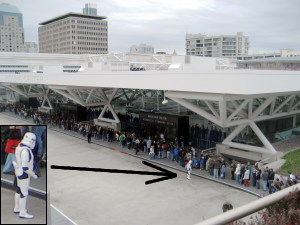 Saturday morning, shortly before 11:00, we arrived at Moscone Center. We could tell we were at the right end of the convention center by the Stormtrooper waving people along. 😀 The pre-reg line ran to the end of the block, but at least it didn’t wrap us around the corner. And when it started drizzling, they opened up a ballroom as a holding area and moved everyone inside. Clearly, they decided to get people in as quickly as possible instead of worrying about ticket fraud (probably more of an issue with CCI anyway). Instead of scanning the tickets’ barcodes, printing labels, etc., they had two people standing at the front of the line: one with a cardboard box, the other with a bunch of blank badges. As we walked past, one collected printouts and tickets, checked whether it was a one-day or 3-day pass, and put it in the box. The other handed out blank badges of the appropriate type. We were in the convention proper within 15 minutes.

The main floor reminded me a lot more of SDCC than Wizard World Los Angeles, though everything was smaller. I wandered around for several hours over the course of the day, spotting people in costumes, looking unsuccessfully for back issues*, and looking more successfully for deals on books and other stuff. At one point I spent probably 45 minutes looking through the unsorted boxes of a booth selling trade paperbacks for 50% of cover, and ended up getting $80 worth for $27. 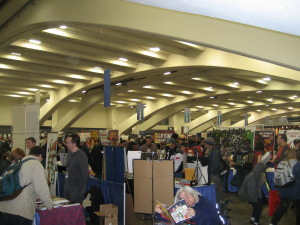 I didn’t spend as much time as I’d hoped to in Artists’ Alley, but I did stumble across the artist of Alcatraz High. Last year in San Diego, I’d looked through a preview at his table, and walked away with a signed copy of #1, not realizing that the preview wasn’t actually in the first issue. I completed the set with the next two issues, and the one I’d passed up last summer.

Lines were a lot shorter, even for well-known celebrities like Kurt Busiek or Terry Moore. I spotted Phil Foglio at the Studio Foglio booth, and Sergio Aragonés had his usual table. I snapped a shot of JMS on the escalator, and he gave a sort of embarrassed “Oh, crap, I’m getting attention” wave. It was a bad angle, though, so I deleted the photo from the camera.

We both caught panels on the making of last year’s Beowulf, specifically animating Grendel and the dragon, and on Tokyopop’s manga licenses with Jim Henson: Return to Labyrinth and Legend of the Dark Crystal. I hadn’t realized that the first volume of the latter was already out, but I’ll be picking it up as soon as I have a chance. Though I have to admit that I picked up the Labyrinth sequel last year, and haven’t read it yet. 😳 (Sadly, I skipped the JMS spotlight to go to this, which means I missed a bunch of announcements.) 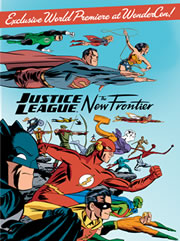 Katie made it to a panel on the psychology of comics and comics fans, and to one on special effects make-up. I attended the premiere of Justice League: New Frontier, which I reviewed earlier. I was surprised that there was no problem getting in. I caught the last ~15 minutes of the big Lucasfilm Clone Wars presentation, got a seat only 1/3 of the way back on the right side of the hall, and had a decent view of the movie and the panel afterward. (Funny moment: the panel moderator explaining that it was coming out on both DVD and Blu-Ray, and that the serious collector should get both. And that the really serious collector should get the HD-DVD as well, since they weren’t going to make any more!)

I almost went to the “DC: Countdown to Crisis” panel just to ask why the heck they think killing the Flash is a Crisis tradition, but killing Supergirl isn’t…but decided against it.

Oddly, people at this con didn’t seem to be interested in seeing specific things. They’d drop in on a panel for 5-10 minutes, then leave and do something else. It was like they were trying to sample everything.

After New Frontier, we met up again and made our way back to our hotel through the cold rain and gusty wind. By then, it was the kind of rain that comes at you sideways, bypassing any attempt at shielding with an umbrella. Even though it was only a 10-15–minute walk, it was infinitely more miserable than the same walk had been that morning, when it was marginally warmer and—more importantly—dry.

I’d definitely go to WonderCon again, though I’m not sure I’d make it an annual visit. If we do go again, I’d definitely do a few things differently. For one thing, I’d make sure we had more time in San Francisco proper. It’s too far a trip not to spend time sightseeing. We basically saw the hotel, the con, and the area right around my brother’s apartment! Though we did manage to catch a few nice views from across the bay on Friday. I’d also try some more restaurants. As for lodging, the Hotel Mark Twain was okay, but there are plenty to choose from. It might be worth staying in the official con hotel. And finally, I’d want to do something about the trip home. 12 hours, even with breaks for food, is just too long to drive.

*Regarding the back-issue hunt, it’s the same problem as other conventions. There isn’t a lot of Golden-Age material out there, and stores only bring the high-grade books they expect to sell. If you’re looking for readers’ copies, like me, you’re better off looking online. More recent books are more likely to qualify for the quarter bins—or, these days, the one-dollar bins.