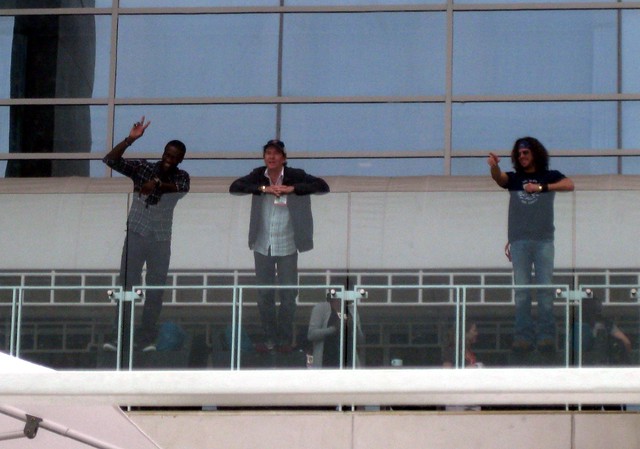 While Katie got up early Saturday morning to wait in line for the Warner Bros. panel in the cavernous Hall H (her goal was Harry Potter, but Green Lantern was an equal or greater draw), I slept in a bit before going down to the Hilton Bayfront for Leverage at the Indigo Ballroom. I really had no idea what to expect, and wasn’t even 100% sure who was going to be there since I couldn’t find a description in the program. 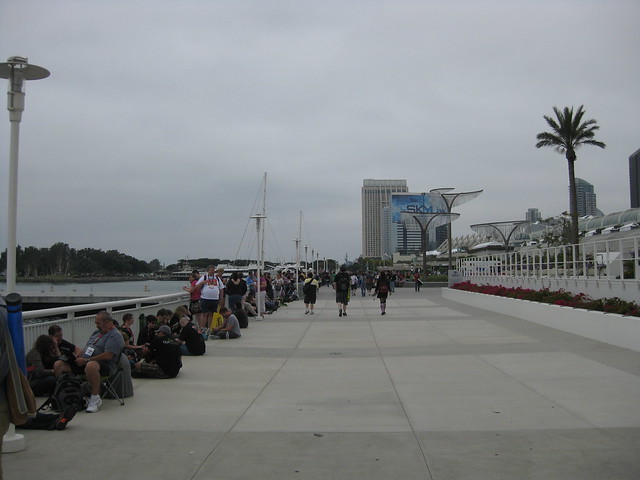 I certainly wasn’t expecting to have to walk straight through the hotel, out the back, and along the edge of the waterfront to get to the end of the line. 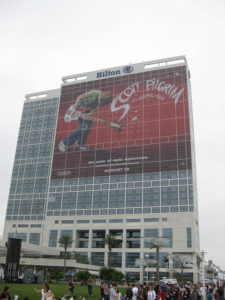 Fortunately, the Indigo Ballroom is big, and they hadn’t started letting people in yet. So even though the line looked long, I still managed to find a seat 1/3 to 1/2-way back from the front. It was a bit nerve-wracking to start with, though, especially since a large part of the line was made up of people who were more interested in the Venture Brothers panel immediately afterward (many of whom no doubt had bad memories from a year or two back when VB was put in a room much too small for its audience).

As I neared the front of the outdoor section of the line, a shout went up, and people started waving up at the balcony. It was hard to see in the gloom, but several of the actors were out on a balcony. Tim Hutton (Nate Ford), Aldis Hodge (Alec Hardison), and Christian Kane (Elliot Spencer) started waving back, and as we took pictures of them, they took pictures of the line. Meanwhile, the Venture Brothers fans were wondering just who the heck was up there.

Everyone received a T-shirt on the way in, with the show title on the back and one of the character’s roles on the front: Hacker (olive green), Hitter (red), Grifter (gray), Thief (blue, I think) or Mastermind (black). I started with an XL Grifter, but traded it immediately for an L Mastermind — which will actually fit. No luck swapping it for a Hacker, though, which is what I really wanted. 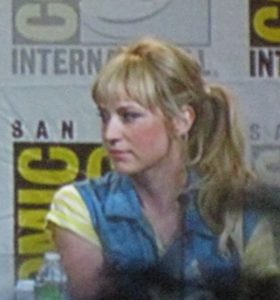 They also had Beth Riesgraf (Parker), producer/writer Chris Downey, and guest star Wil Wheaton…who will be returning as Chaos this year in an episode called “The Ho-Ho-Ho Job.” (He said that John Rogers called him up and asked him to come back as the Grinch who stole Christmas.) Gina Bellman was the only member of the main cast who didn’t make it.

It was mostly a Q&A panel, with a surprisingly good mix of questions. (Too often, audiences seem to focus on one or two of the guests to the exclusion of the rest.) There were a lot of funny moments, and in the middle, they ran an extended segment from “The Gone Fishin’ Job,” which was set to air the following day.

Apparently there’s a show coming up in which you find out that each of the members of the crew tried to steal the same thing years ago, and they all met without realizing it. You’ll see what each of them remembers…and then what really happened.

The best quotes — or at least the best ones I managed to write down — came from Beth Riesgraf and Wil Wheaton.

One fan asked what Parker would think of Comic-Con. Beth Riesgraf said, “She’d have a field day picking everybody’s pockets… so many costumes! This is her crowd.”

Another fan asked about progression of character relationships, and they explained that Parker and Hardison were taking things slow. Wil Wheaton piped in, saying, “I think the Internet has you covered.” Some time later, Aldis Hodge said something to Beth Riesgraf about pretzels, which neatly separated the Leverage fans from the Venture Brothers fans in the audience. 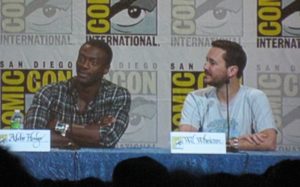 Regarding Hardison wanting to run his own crew, Aldis Hodge said, “I’m not taking on my own crew anytime soon, but maybe 27 seasons in…” A beat or two later, Wil Wheaton added, “27 seasons in, it would be Leverage She Wrote.”

Jumping off of Christian Kane’s singing and cooking, both of which have found their way into Elliot’s background, one fan asked whether any of the other actors had brought hobbies in to their character. I hadn’t realized that Aldis Hodge actually plays the violin and paints. Then Beth Riesgraf joked, “Well, I was really good at stealing stuff when I was little…”

As for favorite memories from the show, TIm Hutton immediately answered, “Food fight.” Almost overlapping, Beth Riesgraf added, “I was going to say the cold cut fight.” Someone asked her to elaborate, and she explained: “It’s a food fight, except you only use cold cuts.” “Good times!”

Finally, one of the last questions was: When do we see Hardison steal Comic-Con? I can’t remember what anyone else said before Wil Wheaton summed it up: “If ever there was a time when Hardison and Chaos would team up…”

Now that would be a fun show to watch!

»Saturday at Comic-Con.
»Full index of Comic-Con posts and photos.