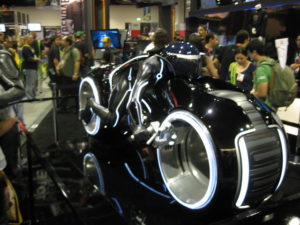 I used to go to Comic-Con mainly for the exhibit hall. That’s where the comics were, after all, as well as the publishers, writers and artists. I was never really big on buying other collectibles, but there was always interesting stuff to see. So if I wanted to get a comic book signed, or look for back-issues, or take a look at the black-and-white previews that DC used to bring of their upcoming books, that’s where I’d be. 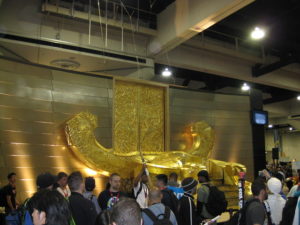 Over time, though, I filled in my back-issue collections. Ebay and Mile High Comics took care of any new/old discoveries. As the exhibit hall expanded to the point that I couldn’t really explore it all in a single day, I also started to get more interested in watching the events and presentations. Switching from a one-day trip to a four-day trip drastically changed my experience, because for the first time in years, I could do both. 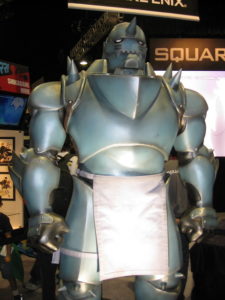 Looking back at this year’s con, though, it almost seems like I was avoiding the main floor. I explored a few small areas, and when I had extra time, I’d walk slowly through on the way from one thing to another, but until Sunday, I don’t think I spent more than an hour at a time in the real heart of the convention. 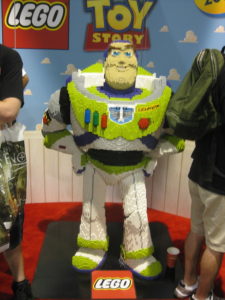 I think a lot of it is a sense of familiarity. There are always a lot of new displays, and the mix of costumes changes every year, but a lot of enough elements stay the same from one year to the next. DC’s booth looks largely the same. Square-Enix still has that Fullmetal Alchemist statue from four years ago. The LEGO Buzz Lightyear is still cool, but I saw it last year.

At one point I walked past a line of people in the middle of one of the larger aisles, and wondered what they were waiting for…until I realized they were waiting for a signing at a bookseller’s booth. That booth was in roughly the same spot and looked exactly like it did last year when I waited in line for a Peter David signing. It was actually kind of eerie — and it was hardly the only booth that seemed to have stayed put all year. 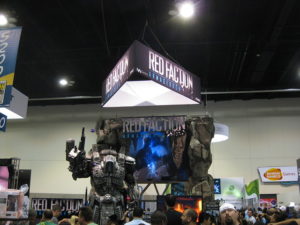 In a sense, the exhibit hall is starting to feel like a city, with an illusion of permanence and (dare I say it) continuity from year to year. You can’t explore an entire city in one visit, and if you come back on any sort of regular basis, you don’t take a general city tour every time. You start developing regular hangouts, like the restaurant or park or bar that you visit every time you’re in town. You specifically look for things you haven’t already seen. And then you ignore a lot of what you’ve seen already.

So I hit my hangouts: Studio Foglio, DC, Sideshow. I did some exploring, making a point to check out the small press, webcomics, and artists’ areas. But those aisle-by-aisle sweeps are a thing of the past.