Today, a group of comics bloggers have gotten together to recommend lesser-known gems of the comics world. Comics are more than Brightest Day and Heroic Age, and you just might want to…read this too! 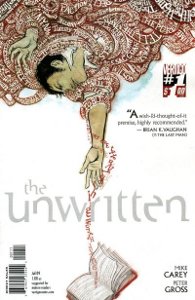 The Unwritten, by Mike Carey and Peter Gross. Recommended for mature readers. Published by Vertigo Comics.

The Unwritten is a story about stories, and the impact fiction has on reality. It’s told as an adventure, filtered through today’s media-crazed society, modern fantasy (especially the Harry Potter phenomenon), occasional moments of horror, and centuries of popular literature.

It was also my favorite new comic book of 2009.

Years ago, author Wilson Taylor vanished after writing 13 immensely popular children’s fantasy novels, leaving his son Tom — the real-life inspiration for “Tommy Taylor” — to grow up as a Z-list celebrity. A question at a fan convention sets the adult Tom onto a path of adventure and danger that has him doubting even his own past, as the world begins to wonder: Did Tom Taylor inspire Tommy Taylor? Or is he Tommy Taylor made real?

By the time of the third major arc, Tom has been proclaimed a messiah, framed for murder, and declared dead. He’s acquired a power trio much like the heroes in his father’s novels (naturally, in the Harry/Hermione/Ron mold), with one ally who may be a fictional character brought to life, and one who plays the sleazy reporter but has his own connections. They’re on the run from a secret cabal, its hit man who can transform objects (and people) into their component ideas…and the surprisingly real vampire nemesis from the Tommy Taylor books, Count Ambrosio.

Although Tom is just now figuring out his role in events, the villains have been pulling strings for centuries. They’ve shaped the world through stories: by controlling how history was recorded, and by ensuring that stories were written that promoted their goals. One early issue flashed back from the present to Rudyard Kipling, who was quite happy to write stories for them promoting the British Empire…until they asked him to change his tune, and he lost everything.

Of course, since this is a fantasy series, stories can also impact reality directly. Magical objects cross into reality, people travel into stories, and in one case, a particularly tormented story actively threatens the heroes.

Every few issues, the focus moves away from Tom Taylor to reveal another piece of the puzzle. One focuses on two children caught up in Tommy Taylor fandom to the point where they aren’t quite sure where playing ends and believing begins. Another focuses on a servant of the cabal trapped inside a Winnie the Pooh–like setting by a writer who was prepared to stop him. 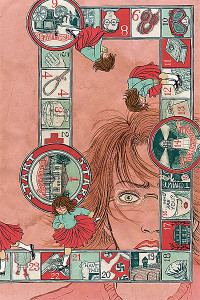 The Unwritten frequently mixes in excerpts from media commenting on the events of the story: television news, magazine articles, blogs, even Twitter conversations. In one issue, Tom is kidnapped by a deranged fan and threatened on a live webcam feed, while viewers debate whether it’s real or just a publicity stunt. In another, a TV news network focuses on the launch of the latest Tommy Taylor novel, while the ticker at the bottom of the screen runs through a series of dire headlines which would normally be the top stories of the day

The latest issue reveals the past of Tom’s ally and guide, Lizzie Hexam…in a choose-your-own-adventure format. She always ends up in the same place, but the path she takes varies…along with the most important parts of her back story. They’re all equally canonical, and you as the reader get to choose which version is “real.” In a sense, we do that with everything we read or watch. We have our favorite versions of stories, TV episodes and comic book issues that “don’t count,” and our own ideas of what’s going on off-screen or between panels.

The Unwritten is up to 17 issues so far, collected in two trade paperbacks with a third on the way. Carey and Gross have a complete story in mind, one that they hope to tell over 60 or 70 issues. Update 2015: The series is complete now, collected in 11 volumes of the main story and a related graphic novel, Tommy Taylor and the Ship that Sank Twice.

Interested in reading more? Good! I’ve written about a more traditional super-hero comic, Astro City, at Speed Force. And there are more bloggers out there. Check out the lesser-known titles reviewed in these other blogs and read these, too!

4 thoughts on “Read This Too: The Unwritten”