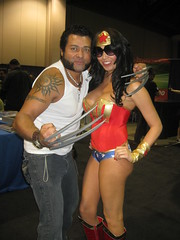 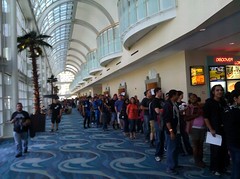 I’ve never had a problem getting into Long Beach before, but this year the line to get in stretched all the way to the end of the lobby. Or rather, the line for people who had pre-registered stretched that far. When I arrived, there were only a handful of people in line to buy tickets at the door, and I was kicking myself for the last-minute decision to buy my tickets ahead of time this year. It took 45 minutes to get through the line, but only 20 seconds to hand over my paperwork and pick up my wristband. They were efficient, just understaffed.

Still, it’s nothing compared to the time I went to San Diego without pre-registering — back when you could still do that — and I waited in line from 8:00am until noon. 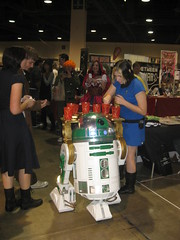 The floor never got too crowded, but the only place it ever felt empty was way in the back by the fan groups and the wrestling ring. And there was nothing going on in the ring at the time. (The first time I saw wrestling at a comic con I thought it was weird – until I realized it was a bunch of guys in garish costumes fighting each other, often with code names and dual identities.) I think the longest line I saw was for John Carpenter.

Most of the well-known small publishers were there: Aspen has been really involved in the con from the beginning, and I saw BOOM!, IDW and Top Cow. There does seem to have been some drop-off. I can’t remember seeing Dark Horse or Zenescope, for instance, and either would be a shoo-in with the added horror theme. DC’s never had a booth here, but they held panels at the first two Long Beach Comic Cons, and they didn’t seem to have any official presence at all this time around. (They have a panel at Comikaze Expo this weekend instead.) 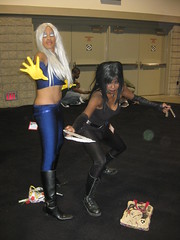 At the back of the main floor, the con had set up several event areas: a Laser Tag arena, a wrestling ring, and a stage. I wandered by the stage while Captured Aural Phantasy was performing a staged reading of an 1940s crime comic book: melodramatic, tongue-in-cheek, over the top, and thoroughly fun. I didn’t catch the title of that story, but they followed it up with “Revenge Can Be Fatal (The Mad Hate of Dr. Zart)” – a sordid (if sparse) tale of vicious betrayal and revenge gone wrong.

I didn’t make it to any of the panels this year, though I was glad to see they’d managed to get rooms close to the main hall this time. (Last year the programming was all the way around the other side of the convention center.) I kind of regret skipping out on the masquerade, though. 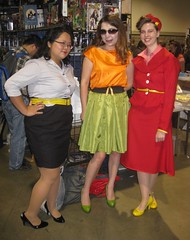 The first booth I went to was the Aspen Comics booth, and Joe Benitez was there. He signed my copies of Lady Mechanika #1 & #2, and while I didn’t talk with him very long, he said that issue #3 should be out within a few weeks.

I caught Marv Wolfman at the Hero Initiative booth (he was actually behind me in line for lunch, but I didn’t want to bother him while he was trying to eat), told him that his and George Perez’ classic run on The New Teen Titans is what got me into comics in general and DC in particular, and asked him to sign The New Teen Titans: Games, the long-delayed graphic novel that finally hit the shelves last month after nearly 20 years. 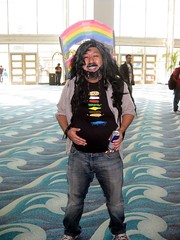 He asked me if I’d had a chance to read it.

And I had to admit that no, I hadn’t.

He suggested that I try to read it all at once, which is just as well, since that’s exactly why I haven’t gotten to it yet. He also said that this was the first work of his in a long time where he hasn’t found things he wanted to change after it was published.

I spent at least half an hour talking with Brian Buccellato, co-writer and colorist on the new Flash series. We’d talked on Twitter before, and met at a signing he did at The Comic Bug the week that Flash #1 was released. He was kind enough to give me a sneak peek at Flash #3 — which looks awesome! — and drew me a sketch of Impulse. 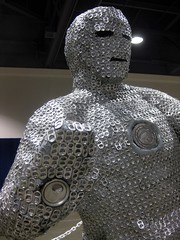 I didn’t buy much this year (lightest backpack ever, even with the stuff I brought for autographs), though I was seriously tempted by Absolute Sandman for 40% off. One of these days, I’ll buy it. 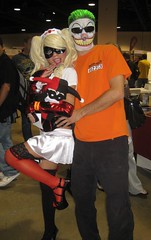 I also picked up a two-issue indie book called Prodigal, which looks like an Indiana Jones-type adventure, and the Coffee: It’s What’s For Dinner collection from Sheldon. (This one pushed me over the “must buy” threshold.)

And when I went back to the Hero Initiative booth to link up my Ralphs card for their community charity program, I discovered that they were offering incentives to do so — one of which was the Transmetropolitan art book. I guess it makes sense: they get a lot more in the long run from an ongoing percentage of grocery purchases than they would from a one-time sale. But it still felt like a steal. 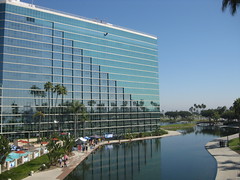 I always try to get outside at least for a walk and a look around. The convention center’s right by the ocean, and while I didn’t explore as much as I did the first year, I did wander out on the deck/bridge past the Hyatt hotel next door. It turned out there was an event going on there as well, though much more sparsely attended: Over the Edge had city council members and other people rappelling down the side of the hotel to raise money for the Special Olympics. There were a few lunch trucks up on the bridge by the info booth, but in the end I decided to just go back to the convention center and grab a panini. 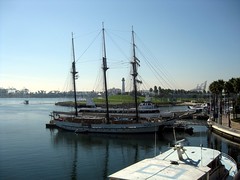 I went out again later on after I grabbed some coffee, and ran into a group of four or five guys who were out celebrating Halloween with what sounded like a costumed pub crawl. One of them wondered what was going on at the convention center, and someone said it was Comic-Con, and he said, “No it’s not! Comic Con is in September!” I told him that it was Long Beach Comic Con — “No way! There’s a Long Beach Comic Con now?” — yes, in its third year. I told him how much it cost, and let him know about Comikaze Expo next week. They moved on, and when I headed back toward the convention center a few minutes later, I saw Jabba the Hutt stopped at a food truck. People were stepping over his tail to get past. Later on I saw the same group in the lobby. I guess they’d decided to check it out.

I wonder if they ended up coming back for Sunday.

»More convention reports
»Take me to the photos! 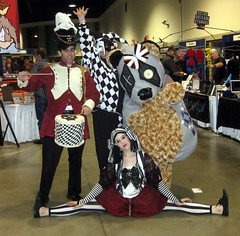 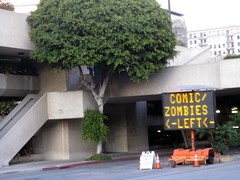