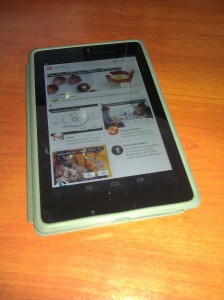 So, I’ve joined the tablet generation. I recently bought a Nexus 7, Google’s latest 7″ tablet.  Here are some first impressions.

Performance is very nice. The games I’d played on my (almost two-year-old) phone are much snappier, plus of course the bigger screen helps a lot.

Within minutes I was typing a lot faster than on my phone, at least when holding it horizontally. Downsides: It’s easy to hit the menu buttons while trying to hit the space bar. Editing is a pain. I miss having arrow keys or a trackball.

The screen size and resolution are just inside the edge of being able to read a full page of a comic book without resorting to guided view. This will change as I get older, but tech will no doubt improve, and I may end up using a larger tablet in the future. I just wish comiXology’s app made it easier to locate comics I’ve already purchased and want to download.

Backup/restore pulled in all my WiFi settings from my phone, which was convenient.

A tablet is much nicer for catching up on news/email/Facebook at breakfast than a phone. Or a desktop or laptop, for that matter. It’s also nice if you drop in at Coffee Bean to relax for a half hour.

My toddler loves the tablet. A few days ago while I set up his breakfast, he grabbed it off the table, set it on the floor, opened the cover, and tried tapping on the screen to wake it up. So far I’ve let him play Fruit Ninja and a couple of interactive kids’ books. He doesn’t quite have the coordination to avoid the edge of the screen, though, so he keeps bringing up a search or dropping back to the home screen while he’s trying to play. I need to find an app to temporarily lock in the running app, so that (a) he won’t get too frustrated and (b) I can look away for 30 seconds and not worry that he’ll end up clicking on an ad for something.

Reading a novel in ordinary indoor light was just fine, and comparable to reading on a Kindle 2. It’s not that great in bright sunlight, though.

Book Navigation on the Google Play Reader takes some getting used to. I’m reading Year Zero, which has a lot of footnotes. You can tap the number to jump to the note, but I kept missing it, or missing the link back to the source. And then trying to return, I’d accidentally tap the slider, jumping forward 1/3 of the way through the book, and reflexively hit the Back button, which doesn’t go back to where you left off, but goes back to the home screen. By the second chapter, I’d stopped reading the footnotes as I got to them and figured I’d just read them when I got to the end of the chapter, which of course removes them entirely from context.

I don’t really mind not having a camera (except the front-facing one for conferencing), because it’s a bit bulky for a camera if I’m not going to get the benefit of actual optics out of it, and I usually have a phone or actual camera anyway.

I am sort of regretting that it’s Wi-Fi only, though, because intermittent access does limit things a bit. Anything you’ve already downloaded is fine, of course, but Google Docs Drive is virtually useless without a connection. I definitely need to look for some sort of local word processing app for writing offline notes. On the plus side, it reconnects automatically to remembered networks, and Gmail at least seems to sync immediately — both with incoming and outgoing mail, so you can read, compose and “send” offline, and new messages will go out as soon as you’re back in WiFi range. (Also, I don’t have to add another $25/30 monthly data plan on top of both our phones.)

Overall, I’m liking it a lot. It’s great for casual reading, communication, and games, and it looks like it’ll work well for writing. I need to look for a decent image editor and offline word processor, and fix a few issues with my WordPress install (I’m using a CDN tool on this site that doesn’t play nicely with image uploads from the mobile app), and I think it’ll be great for travel as well.

Update: Nothing to do with the tablet itself, but I can’t believe WordPress’ Android app still has the bug where if you upload a draft, it pre-fills the publication date so that the post ends up being back-dated when you finally finish it.