This doesn’t seem to be a very common problem, given that when I searched for it I only found a single result on Google, but in case someone else out there runs into the same issue, I thought I’d write it up so they can find it.

I tried to register a Wacom Intuos drawing tablet. The way you do this is you open the Wacom software and click on the registration banner, which then opens your default web browser to the registration page on Wacom’s website, pre-filled with a serial number and some authorization token. If you’re already logged into a Wacom account, it should just register it immediately. Or you can create an account first.

The problem: I got a banner at the top with the error, “Profile ID Missing.” I went back to the Wacom Desktop Center, which popped up the registration banner again. Clicked again. Same problem.

The only reference I found when searching for wacom register "Profile ID Missing" was a German-language review review on the Amazon.de listing for an Intuos tablet. “Was zum Teufel ist eine Profile-ID?” They solved it by uninstalling and reinstalling the Wacom software, and for whatever reason, the registration link worked that time.

Before I got to that point, I tried something I didn’t think would work: I clicked in the URL bar on Firefox and hit Enter, causing it to reload the page. (I forget whether I’d already tried hitting the reload button.) Weirdly enough, it worked, and it registered the tablet. Finally!

It’s weird to look back on all the posts I made agonizing about whether or not to buy a netbook.

It was never anything I would have used on a regular basis, and I knew that (which is why I never went through with buying one). It would have been something I used on trips, mainly conventions, and only to overcome the shortcomings of late 2000s smartphones.

Back then, I always carried another camera to get the “good” pictures, because phone cameras were still crappy. So if I wanted to post something online, I had to get it off the camera, onto a computer, and then upload it. Today’s smartphone cameras and apps are so much more capable that they mostly solve the photo issues.

It’s still painfully slow to type anything of length on a phone, but tablets have emerged since then and are a lot easier to type on. Hybrids like the Surface Pro and add-on keyboards make it even easier.

Touchscreens have solved the crappy trackpad problem netbooks had.

Faster phones and cell networks, and a more mobile-friendly web, have made a lot more things possible directly on the phone.

Netbooks, meanwhile, are pretty much forgotten, at least in the form they existed in at the time. Chromebooks are doing OK, at least in schools, but they aren’t quite the same thing. You’d think “netbook” would refer to something more like the network-dependent Chromebook, but it typically referred to the tiny form factor of a mini-laptop.

I wouldn’t carry a laptop of any size around the convention floor, that’s for sure. And I probably wouldn’t bring one on a short trip at all unless I was planning on working during the evenings.

For short posts, I’m actually more comfortable sitting on the couch and writing on my tablet than firing up my computer and sitting at my desk. This is something I discovered during NaBloPoMo. My workflow typically went like this:

What would send me to the computer are the things that are difficult to do on a tablet:

I’m not sure how much of that is the couch and how much of that is the fact that I’ve been putting off upgrading my home computer in favor of the devices I use more often. I finally replaced the ancient Nexus 7 with a Samsung Galaxy Tab S2 a few months ago. (It’s awesome!) It’s FAR more responsive (the Nexus 7 was basically a proof of concept, and doesn’t deal with modern software very well), so I can actually use it for stuff.

Plus it turns out even at 8″, a 4:3 screen has a much better balance of onscreen keyboard and text area than the 8:5 screen did. Being able to see more of your document, even a little, has a surprising impact on how comfortable it is to write it.

The Nexus 7 Android tablet has been discontinued in favor of the Nexus 9. (via Slashdot.) I’ve had a Nexus 7 (2012) almost since the beginning, and while it’s showing its age, I’ve been trying to stretch out its lifetime, because I actually do still use it on a regular basis.

Most of what I do these days with it is reading. Email. Books. Comics. Feedly. Pocket. Some photo management and searching. My four-year-old plays games, most of which run fine once they’re up but they take forever to load. I’ve also started introducing him to photo editing apps like Pixlr and Aviary. I used to do more typing and web browsing on it, but it’s just gotten so slow that it’s actually faster to pull out my phone or go over to a computer. Katie doesn’t use it much at all because she has a Note, which is almost into tablet territory already. (She’s not alone. Since the iPhone 6S came out, Pocket has noticed that people with both tablets and phones use their tablets a lot less often if their phones are larger.)

But the 7″ tablet form factor is perfect to keep with you at the breakfast or lunch table, or kick back on the couch.

The thing to remember about the Nexus 7 is that the original release was a proof of concept. There were android tablets before, but the market was still considered something of a joke compared to the iPad, and Google wanted to prove that (a) there was a market for a good Android tablet, and (b) there was a market for a tablet larger than a phone and smaller than an iPad. The iPad Mini didn’t exist at the time, and Apple was still ridiculing the concept.

It succeeded. But they made some mistakes with the hardware that were corrected in the 2013 model. Unfortunately those mistakes have made the first edition notorious for slowing down.

Mine was getting close to unusable around the time Lollipop was released, and upgrading finished the job. Fortunately wiping it and doing a fresh install cleared up a lot of the problems, though as I’ve added more apps, it’s continued to slow down. Chrome is too slow to use, and while Firefox is a little faster, I basically can’t surf the web on the tablet anymore.

But for a core set of apps, it’s still useful. I’ll read/reply to email and skim Feedly in the morning at breakfast, saving items to Pocket to read later. Then at lunch I may read a book or catch up on those saved articles. Since Gmail and Pocket both work offline and sync in the background, I can still use them in places without WiFi. Mobile data would be nice, but offline+sync makes it less critical, and I’ve saved a few hundred over the last three years by not having an extra data plan.

I am going to have to replace it soon, but I can’t decide what with. I don’t want the larger size that the Nexus line is moving toward, and while I’ve been looking at Samsung’s Galaxy tablets, the models I’ve tried all feel a little too small or a bit too big. I don’t want a 10″ tablet, and I don’t want a giant phone. I want a device that’s just big enough to read a full comic book page on it, but still small enough that it feels like a paperback book.

Note: I didn’t actually post this when I wrote it. I’ve backdated it to the original date because it’s no longer timely, but I wanted it online so I could link to it.

Usability researchers like Jakob Nielsen have long contended that people read differently online than on paper: they tend to skim, follow links, and jump off quickly if they don’t find what they want. (Rather than being judgmental, Nielsen simply advises that you tailor your online writing to this.)

Now the Washington Post reports that people are observing a spillover effect, with online skimming habits interfering with concentration when it comes to more in-depth reading…even when reading print.

Sadly, the article mostly distinguishes between two modes of reading: 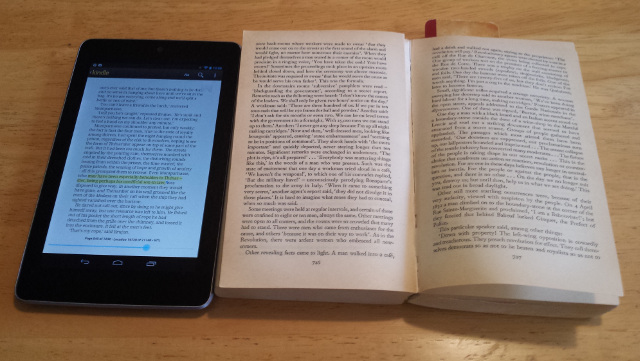 Personally, I’ve found display size to be the biggest factor in maintaining attention. I get tired of reading on my phone, and I tend to skim on a desktop or laptop, but a handheld tablet (I have a Nexus 7, which is close to the size of a paperback book) works out about right. I’d much rather read a long article on that tablet than on a computer, even with the browser window sized for optimal column width.

So yeah, it’s much easier to concentrate on something long in a book than on a desktop or cell phone…but an ebook reader or a tablet is a lot closer.

There are still tradeoffs: My Les Misérables re-read changed drastically when I switched from a paperback to my tablet…not because I couldn’t concentrate on long passages, but because my method of notetaking changed. My reading actually sped up, but my commentary slowed down. (It did ultimately take me longer than I expected to finish the book, but only because I had so many other books I wanted to read, and ended up taking breaks and reading them instead.)

The main problem I do have with a tablet isn’t continuing to read, but starting to read. Even without a wifi signal, it’s tempting to catch up on email, or saved articles in Pocket, and before I know it, I’m done with lunch and I haven’t even opened the book I’d planned on reading.