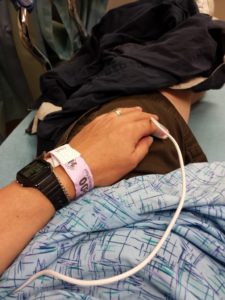 Over the next hour, it felt like the reaction was under control, so I figured we could return to the convention center. Unfortunately, anaphylaxis can take several hours to run its course, and medication can wear off before it does.

It started out fine. We walked past the outdoor Axe Cop display. I took a photo of the Despicable Me Minion blimp. We crossed the tracks, pushed through the crowds, and made our way inside to the nearest elevator.

But somewhere along the line my stomach started cramping up, and I started feeling light-headed. As we crossed Sails Pavilion, I started really hoping we’d make it across before I passed out so that I could fall on carpet instead of concrete.

Outside Ballroom 20 we stopped and asked one of the staff if there was a place I could lie down because I wasn’t feeling well. A lot of that hallway is set aside for lines, or has sitting/standing banned for fire reasons. She directed me to the stroller parking enclosure. Katie took J off to the day care (conveniently, we’d already scheduled it for the afternoon) while I tried — and failed — to relax. 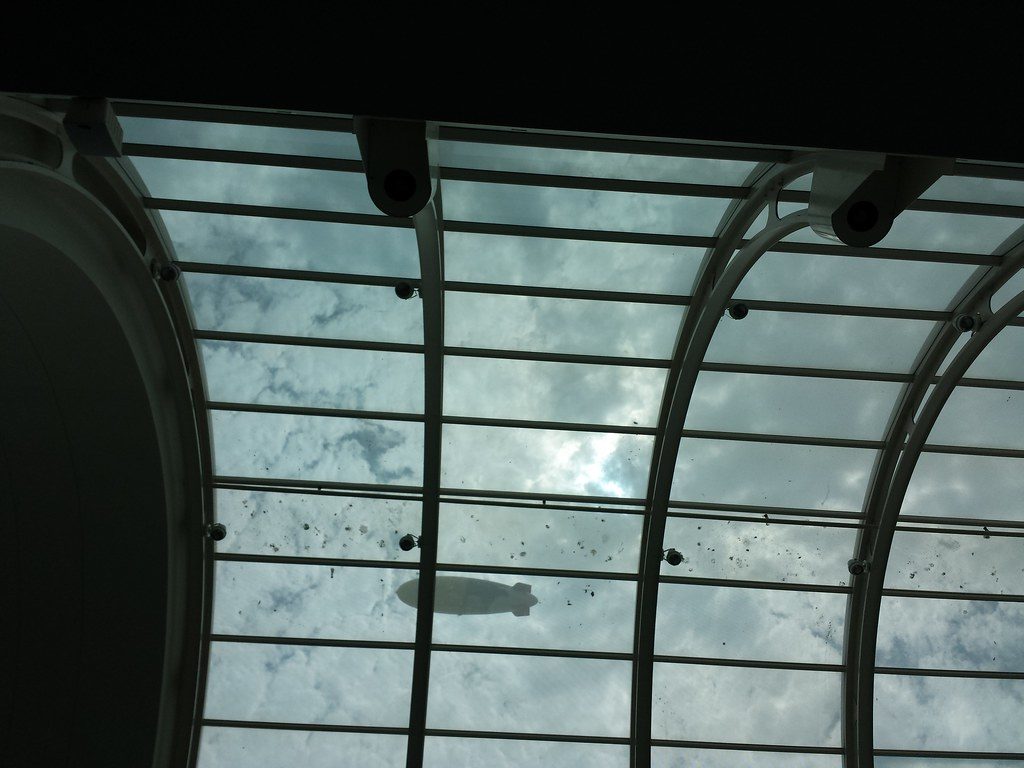 At this point the timeline gets a little fuzzy. I remember staring up at the glass roof, watching the minion blimp float overhead. I remember my hands and feet going numb, and asking Katie to jab me with the Epi-Pen because I wasn’t sure I had the grip strength. I remember my ears going numb at one point, which really scared me, and shortly after the shot, my ribs.

I remember convention staff, onsite first aid, and paramedics. I remember giving my name and symptoms repeatedly, trying to correct the overall timeline in a couple of cases. I distinctly remember one of the paramedics looking like Terry O’Quinn (Locke from Lost). They gave me oxygen and a tube with asthma medication to breathe through.

Once they’d determined I was stable enough, one of the paramedics asked about an anxiety case that had also been reported, and got the response “Right over there.”

It turned out at least some of the numbness wasn’t from the blood pressure spikes & troughs of anaphylaxis, but from hyperventilating. Now I wonder if, had I managed to control my breathing early on, I might have been able to just spend a few hours at the onsite first aid station instead.

Eventually they helped me into a wheelchair and wheeled me out through the service corridors that only staff and celebrities normally see. Katie remarked that one of the actors she’d seen had talked about the big freight elevator they took us down. Then we were out in the back of the convention center, where they loaded me onto an ambulance and took me to the hospital.

The last time I went to the ER for an allergic reaction, they interviewed me and sent me back to the waiting room. But that time, I walked in under my own power after a co-worker drove me there. This time, I was carried in on a stretcher from an ambulance.

I ended up spending the next few hours under observation, hooked up to various monitors, repeating the story to each new category of staff, tech, nurse, and doctor. The ambulance drivers offered Katie a ride back to the convention center so she could pick up J, though after a while we decided that it would be simpler if they stayed at the con and I met them there.

I was allowed to use my phone and tablet, so I did a round of “I’m OK” texting and figured out plans with Katie, then got some reading in. (Mira Grant’s new Newsflesh novella, which is a better choice for hospital reading than, say, Blackout.)

For a while, I hoped I could make it back while the convention floor was still open, especially when the doctor declared at 4:30 that it looked like they’d only need to keep me for another hour. Unfortunately I didn’t walk out until 6:20, and by the time I’d called a cab, waited for it, and taken the ride back to the convention center, it was just after 7:00, the floor was closed, and people were streaming into the Gaslamp District for dinner.

I seriously thought about going to see the Flashpoint Paradox premiere. Not because I desperately wanted to see the movie a week early, but because they were going to have a discussion afterward, and because damn it, I’d missed the entire afternoon of the con (including the pickup time for the DC exclusive for which I’d gotten one of the last wristbands that morning). But 15 minutes usually isn’t early enough to get into line for a Ballroom 20 presentation, I was exhausted from the allergic reaction and medication, I hadn’t seen J since before going to the hospital or Katie since shortly after check-in, and I basically hadn’t eaten anything since breakfast.

We ended up going out for a simple dinner and heading back to the hotel, where I went to bed early and got the best night of sleep of the whole trip.

If you’d like to help prevent situations like this from happening, please consider supporting Food Allergy Research and Education (FARE). We’re participating in this year’s Walk for Food Allergy [updated link to the general donation page], and you can donate to the organization through our sponsorship page. Thank you!

One thought on “Going to the ER at Comic-Con: Not the Peanuts I was Expecting”