There’s a peanut allergy alert for “Chocolate to Die For” ice cream.

It reminds me of the time I saw a recall of “Toxic Waste Nuclear Sludge” candy, which turned out to actually be toxic. I mean, with a name like that…? (In that case it was lead found in the candy bars).

Though now that I think about it, my first full-on anaphylactic reaction was to an ice cream cake that was allegedly “chocolate, chocolate, everything chocolate” (and turned out not to be).

The weirdest thing about the apparently-not-actually-Covid case I’ve got has been its effect on taste and smell.

It’s already starting to go back to normal, but for a couple of days it went really wonky. It never went out completely. It was more like taking an audio equalizer and readjusting the sliders so that some frequencies are barely audible and others are louder than they should be. And maybe shifting tracks out of sync while you’re at it.

Umami was the only taste that stayed intact, so flavors like cheese were fine. Sour was blunted in some cases, overpowering in others. And sweetness was both faint and delayed, which was really strange.

Seriously: I tried a chocolate chip cookie, and at first it was like eating a cracker or plain biscotti, but after a few seconds of chewing I could taste the chocolate and then the sugar.

I did some experiments with smell and the spice cabinet. I could smell most of the dried herbs fine – oregano, thyme, dill, cloves. Rosemary was kind of faint, but I could pick it up.

I could smell cinnamon but not nutmeg, which I thought was odd.

But the really weird one: paprika, ancho, black pepper, cayenne and ginger all smelled subtly off from normal. It was like when you get a chile of a type that’s normally spicy, but isn’t, and you can still taste the flavor but it doesn’t have the bite you expect.

Ketchup and mustard tasted more sour than usual. Plain yellow mustard was so intensely sour I couldn’t stand it!

Teriyaki tasted a little more like sweet and sour sauce.

Gochujang and caramel were both a little bit off, but I can’t quite place how.

Chocolate syrup was interesting, because I could pick up the chocolate taste before the sweetness, so it started out tasting like darker chocolate.

The same thing happened with chocolate candies. We have an assortment of Ghirardelli squares, and I tried a few of them: the 60% cocoa tasted like the 72% normally does. The filling on the mint was more noticeable than its chocolate coating. And the sea salt caramel just tasted like salty chocolate. 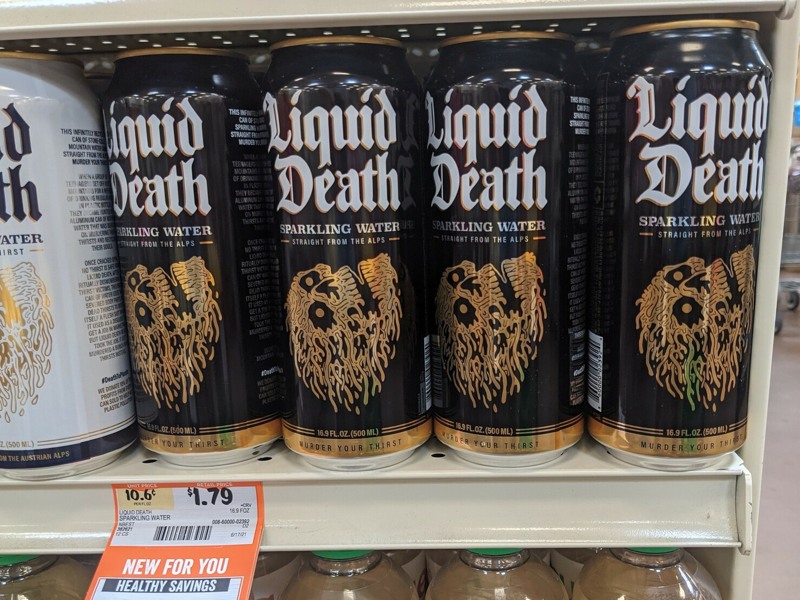 I mean, the idea of marketing canned water as “Liquid Death! (murder your thirst)” is weird enough (IIRC they wanted to make water “cool” like energy drinks), but the “healthy savings” label just kind of makes it!

The other day I grabbed a coffee and muffin while out walking, and found an out-of-the-way outdoor place where I could unmask and eat without being near anyone else.

It was weird! It felt like I was getting away with something. This sort of thing used to be normal, but now it isn’t… and that’s weird too!

I haven’t eaten at a restaurant in nearly a year. Not even outside on a patio when health orders have allowed it. (Though I have bought take-out.) This was only the second time since last March that I’ve eaten anything away from home except the occasional travel mug of coffee in the car. Not that I bother with that very often, since I rarely drive farther than the grocery store. I’ve even stopped carrying my Epi-Pen everywhere. I know I’m not going to eat until I get back.

I think the last time I ate at a restaurant was when I went out to lunch with some co-workers the first week of March, and we were talking about whether we wanted to switch to working remotely early, before the order came down. We knew it was coming sooner or later.

As it turned out, all of us who were there ended up spending just one more day onsite. The other two both started working remotely the next week, and I came down with the flu that weekend (at least I think it was the flu) and didn’t recover until the office closed.

I’m still at the same job, but that office? Gone. They’re moving to a new location for when onsite office work is a thing again. I haven’t been to the new office either, because it’s not ready yet, and everything’s in storage for now, presumably including the clutter I would have taken care of if I hadn’t been sick when the work-from-home order came down.

I hope I rinsed out my coffee mug.

And didn’t leave any food at my desk.

But hey, at least I know I didn’t need all of those hand-written notes! 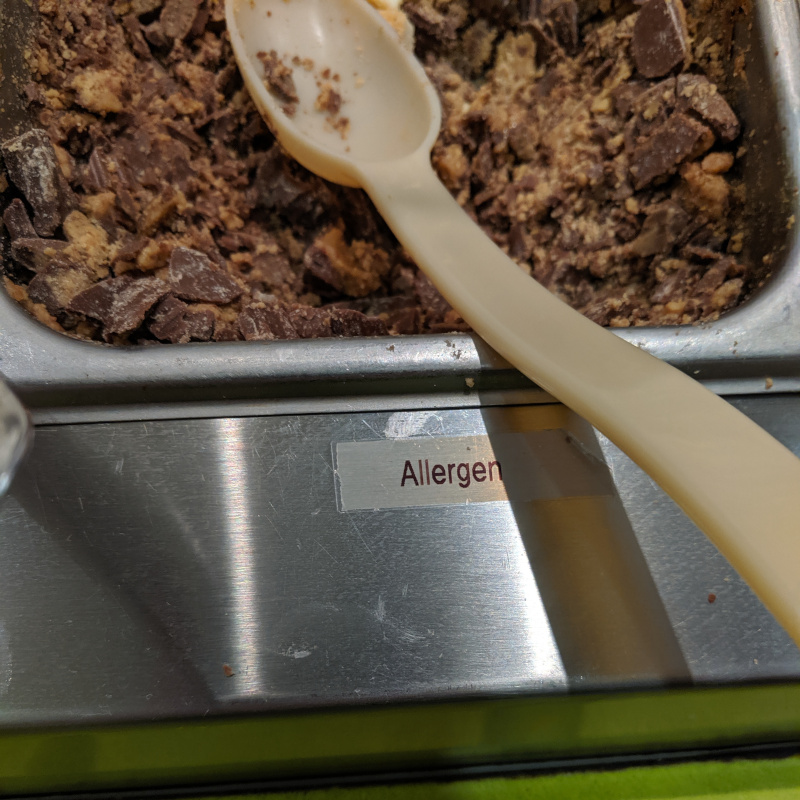 I found this photo on my phone from sometime last year, back when you could still go to self-serve frozen yogurt/ice cream places. The label is…well…TBH it’s accurate, if a bit vague…