Last night I had to do some late-night laundry, and when I went in to move clothes from the washer to the dryer, I noticed water on the floor. My first thought: Great, the washing machine’s busted. On opening it, though, it looked like it had at least drained fine. So I checked the closet for the water heater.

Bingo: A fine jet of water spraying out the side of one of the pipes.

So I got out some duct tape, figuring it could block the leak for a few hours, and notified the landlord so he could call a plumber.

It was dripping again by the time I finished writing the text. Maybe it would have worked if I’d been able to shut off the water to that pipe before putting the tape on, but my plumbing expertise is…rather limited. I didn’t want to mess things up any more than I had to.

But I did know that you don’t want water puddling on your floor, even if it’s a concrete laundry room floor, so I put a container down to catch the drips (now that it was only drips). It was full by the time I came back for the clothes.

Then I noticed the wall vent near the damaged pipe. There was a small hole in the screen to allow an overflow pipe to run outside, and it was a few inches below the bottom of the pipe that the hot water was trickling down.

Lightbulb moment: Cut a Pringles can in half and make a trough to channel the water out through the vent and into the planter outside.

Problem: I don’t think I’ve bought a can of Pringles in over a decade.

I actually ended up using several toilet paper rolls taped together end to end, but it worked: The spit-and-baling-wire contraption diverted the water outside, keeping it from flooding any worse until the plumber arrived.

Yeah, it’s best to fix something right. But sometimes you need to patch it now and fix it right later. 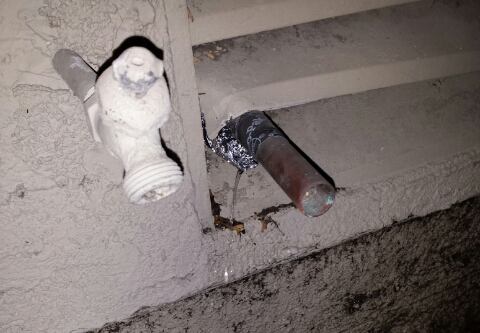