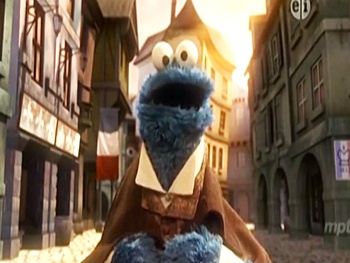 Yesterday the Les Misérables Broadway page on Facebook linked to a YouTube video of “Les Mousserables,” a Sesame Street sketch in which Cookie Monster, as Jean Bonbon, must learn to recognize other people’s feelings and share his cookies. It was…okay I suppose. It had its moments (like “One Day S’more”), and it was fun to see them take on the movie’s visuals (Snuffleupagus as the Elephant of the Bastille, for instance). Maybe my expectations were too high, or I was in the wrong mood for it. I’ve seen a number of “Elmo the Musical” bits that were quite entertaining, and I loved the “Finishing the Splat” sketch with Oscar the Grouch.

Yes, I have a toddler in the house, in case you’re wondering.

YouTube recommended “Les Miseranimals,” which has long been one of my favorites. It’s the sketch that got me to look at Animaniacs at an age when I was old enough not to be interested in afternoon cartoons (with the exception of Batman: The Animated Series), and it was quickly clear that even if the show was aimed at younger viewers, there was plenty of fun for a teenager to enjoy as well. So we all watched a grainy copy on the tablet even though the crisp DVD was sitting on a shelf across the room. It still holds up, though some of the songs work better than others. I’m not sure how I never noticed before that M. Tristesse (the restaurant owner) is basically one of John Cleese’s French caricatures from Monty Python.

I also found it sad that Rita’s song “There is a Flat in Gay Paree” is no longer shorter than “Castle on a Cloud” in the current version of the show.

From there YouTube recommended a clip from Forbidden Broadway‘s take on the show, which turned out to be someone’s recording from the audience in some production. That sort of thing bugs me, but I watched the whole thing, having discovered a few months ago that my aging audio cassette is no longer playable (and not having gotten around to replacing it). This was hit and miss, partly because a lot of the parody depends on the show being new at the time.

I suppose technically I watched four parodies, because even though we were ready to stop after 30-40 minutes of tiny videos parodying the same show, there was a link to a three-minute clip called “On My Phone.” It’s apparently from a more recent Forbidden Broadway show, and it’s brilliant.