Huh. Verizon has sold what remains of Yahoo! and AOL.

For half of what they paid for them. 🤦‍♂️

To a private equity firm. 😬

Apparently the division formerly known as Oath and later as Verizon Media Group will be called Yahoo going forward, which is probably a good move.

I’ve got to say, though: Flickr and Tumblr really lucked out that Verizon sold them to companies that actually had something to do with their core service. Flickr went to SmugMug, a photo-sharing company, and Tumblr went to Automattic, a blogging company.

I’d like to think someone at Verizon put in the effort to find a good fit for each. It’s probably more likely that they just weren’t in a hurry at the time, since they still thought they could get something out of the rest of what they bought from Yahoo.

When AOL first announced they were discontinuing Netscape, they recommended Firefox (a logical choice for many reasons). Since then, they’ve also started heavily promoting Flock—to the point of offering seamless upgrades from NS8 to Flock. ( Confirmed. I let it sit open in the background for a while, and it eventually popped up the offer for 1-click Flock migration.) Netscape 9 has an update notice that offers to download Flock or Firefox.

The key issue, of course, is moving as many users as possible from a discontinued browser—there’s no doubt that security holes will be found in it over time—to one that is actively maintained.

Why Flock, specifically? Well, sticking with the same toolkit and user profile makes migration easier, so that narrows the field to Firefox and Flock. (Not sure about SeaMonkey’s profile.) Since Netscape 8 and 9 were big on integrating with websites, Flock’s “social browser” seems a slightly better fit. And it turns out most of the Netscape 8 team went on to build Flock. Talk about social networking!

(via Flock: The Netscape Spirit Lives On)

It’s been a long time coming, but AOL has officially decided to shut down the Netscape web browser. The final security updates for Netscape 9 will go out in February, and then that’s it.

It’s been on life support for a while now, as AOL has tried repeatedly to revive it. After they dismantled the Netscape team in 2003 (just before spinning off the Mozilla Foundation), everyone expected that would be the end, but they came back with a surprise update, Netscape 7.2, the following year. Then they hired an outside company to reinvent it as a mash-up of Firefox and Internet Explorer, producing the Netscape 8 chimera. And just a few months ago, they went back to the well and released the Firefox-based Netscape 9, trying for the Flock model of integration with social networking sites…but only integrating with their own.

So what killed it? Netscape was arguably the pioneer, building on Mosaic’s success to create the first widely-used browser on the fledgling World Wide Web.

It’s interesting that, as I made this list, I realized that the transition to open source really didn’t help Netscape, the company. But it led to the formation of the Mozilla Foundation and the release of Firefox, one of the most visible open source success stories out there. The company and brand name withered, but the code itself flourished.

Like the demise of IE/Mac, it’s more of a symbolic end than one of substance. In my opinion, the true “heir” so to speak of the early Netscape has been Mozilla, and now Firefox, for quite some time.

Update: Asa Dotzler has a somewhat less nostalgic take on the matter, as well as a link to commentary at TechCrunch. I can’t believe I forgot to mention the crippling/crufting of Netscape 6-7 as compared to Mozilla.

Update 2: More comments at Slashdot. Gee, I wonder who submitted that story? 😉

Update 3: Some commentary from the Web Standards Project, with a somewhat familiar-looking title.

You’ve probably heard by now that AOL and Yahoo are preparing a system by which large-volume email senders can pay to get their mail sent on to subscribers. You probably haven’t heard that it’s not just pay-to-send so much as it’s pay-to-get-accredited. Senders pay a company called Goodmail to say “we won’t send spam,” Goodmail checks them out, and Yahoo and AOL use Goodmail to bypass their regular spam filters.

This, of course, hasn’t stopped a flood of knee-jerk reactions. (via Spamroll)

What’s funny is that this conundrum has been almost exactly like the controversy two years ago over Microsoft choosing Bonded Sender as an accreditation service/whitelist for Hotmail—knee jerking and all.

Back then I wrote the following article and never got around to posting it. Thanks to AOL, it’s finally topical again. Sadly, I haven’t had to change much to bring it up to date. END_OF_DOCUMENT_TOKEN_TO_BE_REPLACED 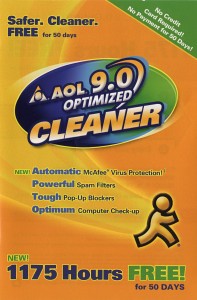 I’d seen an AOL CD packaged to look like laundry detergent before (Tide, specifically), but this seems to take it a step further.

I think what makes it seem strange to me is the fact that they made “Cleaner” more prominent than “AOL.” Sure, you can’t miss it, especially with the running man icon, and of course they’re plugging their filters and bundled antivirus (to clean your computer), but it just seems like they’ve taken the metaphor a bit far in the design.