Whenever I see this sign, I always think of the story about P.T. Barnum trying to get his visitors out of an exhibit so that new customers could come in. He eventually put up a sign saying “This way to the egress,” figuring most people wouldn’t know the word just meant “exit.” According to the legend, it worked. 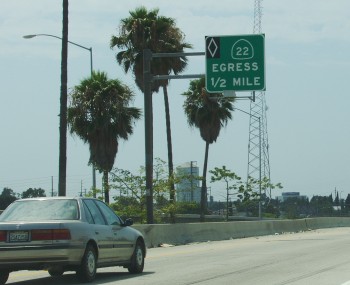 Now, given that every other freeway sign I’ve seen says “exit,” I have to wonder why they phrased this one the way they did. My best guess is that it’s because it’s marking an exit from the carpool lane (it’s on the Santa Ana Freeway, heading north between the 55 and 22) instead of an exit to surface streets or directly to another freeway—but even that doesn’t make sense, because every place where you’re allowed to leave a carpool lane is marked as “exit!”