Clouds and timing squashed the “supermoon” and “blood moon” effects here, but it was still the most unusual lunar eclipse I’ve experienced.

Usually I’ll stay up late or get up early and go outside to watch the eclipse by myself. Last year I took my then-three-year-old son out to watch an eclipse around midnight.

Tonight’s eclipse got underway before local moonrise, and I wanted to see it as soon as possible. So J. (now four and a half) and I went out to an intersection in a residential neighborhood near the top of a hill with a clear view of the eastern horizon. We arrived at sunset, and two other people were looking eastward: a woman with a camera and full tripod, and a man with binoculars. The four of us all set up on a triangular traffic island on the northern side of the intersection.

Flat layers of clouds streaked the sky, and we worried that there might not be much to see at all, but it was only a few minutes before a slightly-off crescent moon rose due east of us, right in line with the street. END_OF_DOCUMENT_TOKEN_TO_BE_REPLACED

Today’s Astronomy Picture of the Day features a view of Mauna Kea’s shadow on the sky, just at the tail end of last week’s lunar eclipse: 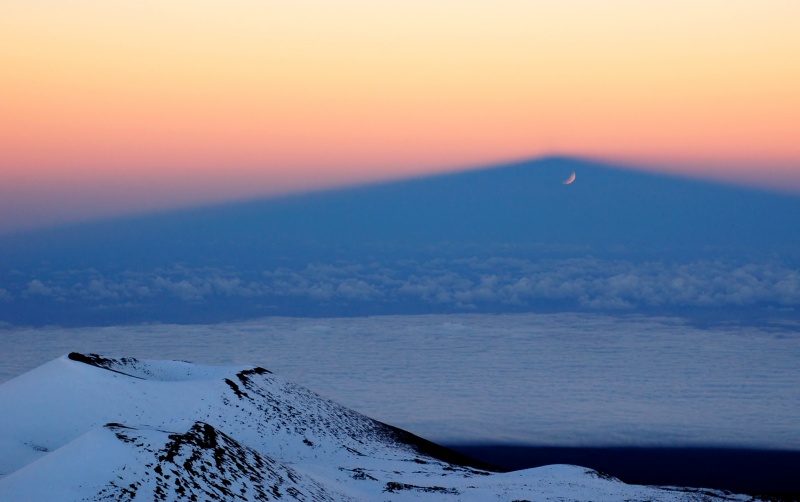 I couldn’t help but be reminded of our visit to the summit in April 2005, just at sunset, when I took this similar (but decidedly less cool) photo: 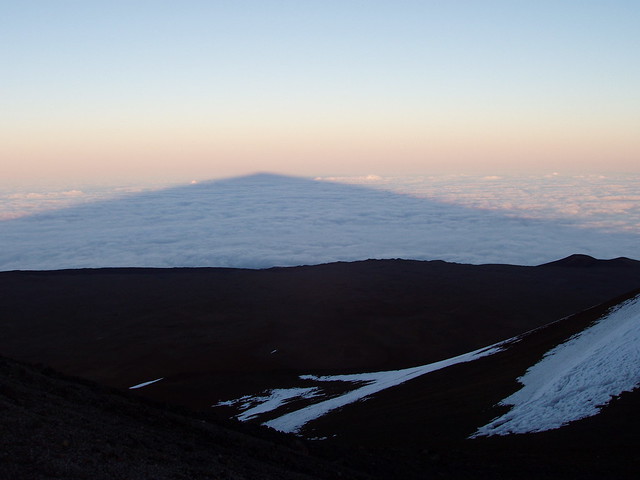 Atmospheric Optics explains why most mountains’ shadows look triangular when viewed from their summits.

About a month ago I posted about noticing the Belt of Venus—the red band that circles the entire horizon just after sunset—and the Earth’s shadow on the sky. I snapped this picture on the drive home this evening. This is looking east, away from the setting sun.

If you look at the right edge of the picture, behind the silhouette of the tree, you can just see the red band fading into the dark gray of the Earth’s shadow.

(And to think, I almost brought the good camera with me this morning… Update: It turns out that I did bring it, and just didn’t realize it was there. Oh, well.)

A few nights ago I was walking around sunset, and decided to look for something that had been mentioned last week on the Astronomy Picture of the Day: the Belt of Venus.

Somehow I’d never noticed that after sunset, the band of red encircles the entire sky at the horizon. Even more amazing, if you look away from the sun you can actually see the Earth’s shadow on the sky as a slightly darker blue below the pink. It reminded me of the view of Mauna Kea’s shadow on the cloud layer below. Oddly, though I didn’t pay any attention to it at the time, the Belt of Venus is clearly visible in that photo!

I guess at sunset I’m most likely to be looking at, well, the sunset. Or focusing on whatever it is I’m doing at the time.

This was Thursday night, so the moon was almost full. It rose just below the Belt of Venus, just inside the shadow. So close to the horizon, the moon illusion was in full effect, and it looked huge!

And me without my camera. *sigh*