Start your own cable company like Jack and Jill* did! 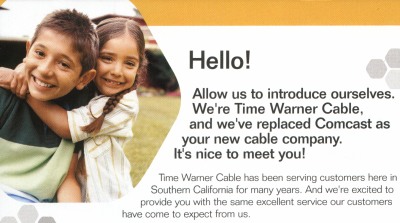 This showed up in our latest cable bill. Time Warner is taking over from Comcast, and while their “Hello, my name is ____” campaign makes sense in a sort of cutesy way, I can’t figure out the logic of this one.

Though I imagine many people would agree that their cable company acts like it was run by eight-year-olds.

*I was trying to think of something to name the kids. My first thought was something like Wakko and Dot, but it didn’t fit the tone. Then I thought of Jack Warner, and Jill was obvious.