I have a bunch of old coffee mugs from TV shows, art museums, even an apartment complex where I used to live. In once sense these aren’t replaceable. If I ever break my Mozilla Coffee mug or the “I’m in the middle of fifteen things, all of them annoying” quote from Cmdr. Ivanova, or if I lose the “Venti Schmenti” travel mug from Diedrich’s (a coffee chain that has since been absorbed by Starbucks), that’s it — I can’t get another one.

But I have plenty of other coffee mugs, and there’s no shortage of mugs I could buy to replace them if I had to.

It’s interesting to think that they’re both, depending on how you’re looking at them. 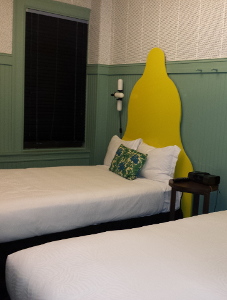 Maneuvering around toys on the living room after four days by myself in a hotel got me thinking about clutter. Traveling forces you to pare down your belongings for the duration of the trip. What fits in the suitcase. What’s easy to pack up again (if you’re going to more than one place). But it’s really an illusion enabled by two things:

Yeah, it feels like you’re simplifying your living situation for a few days…but that’s because you’re paying for someone else to do all the maintenance work.

After paring my inbox down to 100 items in mid-January, then 75 by the end of the month, I set my next goal of getting it down to 50 by the end of February. I just made it. I managed to hold in the 60-65 range for most of the month (after going through each day’s new mail), and decided to make an extra effort on the last day.

I’ve gotten a lot better at dealing with new stuff, whether answering it, filing it, taking an action elsewhere online or in the real world, or (in some cases) just deleting it. I’ve only got about 10 items from the last two months that I still need to act on in some way. The rest are older, mostly Flash-related info or to-do items. A lot of them are going to take longer since they involve research, or scanning, or writing.

Who knows? By summer, I may actually have only new messages in my inbox!

Well, I actually made one of my goals for January. I not only got my email inbox down to 100, I got it to my secondary goal of 75!

A lot of what’s left are to-do items for my Flash website. (Some reminders I sent to myself, some info people sent me.) I should either find time to do them, or add them to my current to-do list and remove them from my inbox.

Next goal: Inbox 50 by the end of February.

My email inbox is now below 100 messages. It’s kind of sad that this is actually an accomplishment!

I’m down to about 10 items from the past month, another 20 or so to-do items I’ve sent myself, 8 back-issues of This Is True that I missed the first time around, and a bunch of older stuff related to my Flash website.

The hard part isn’t the length of the list. The hard part is deciding, with each message, whether to toss it, file it, or keep it around so that I can act on it — and then actually following through!

I’m sort of hoping I can get it below 75 by the end of the month.