You may recall that Burger King had a marketing tie-in with Star Wars: Episode III: Revenge of the Sith. You may also recall that the movie came out last May. It seems that the Dark Side continues to dominate the destiny of at least one Burger King franchise. This picture was taken today (January 1, 2006): 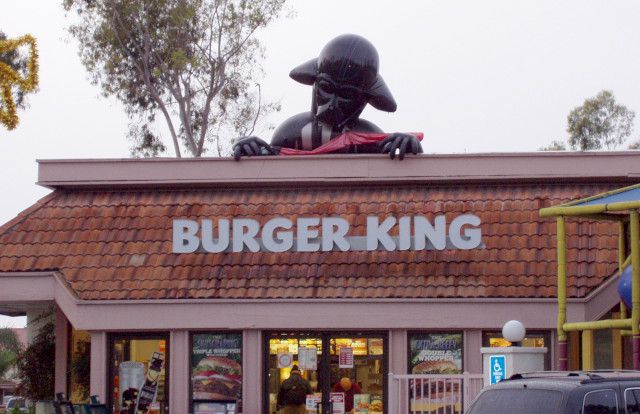 OK, it may have deflated a bit, but 7-8 months is a bit long to keep an inflatable Darth Vader on your roof.

(10 points to the first person who identifies the reference in the title.)

We went out to see Star Wars: Episode III last night. And for once, we weren’t disappointed. This is the kind of movie the last two should have been. There was a feeling of urgency throughout this movie that wasn’t present until the first battle of the clone army in Attack of the Clones. A lot of it does depend on having seen the original trilogy, particularly where Anakin/Luke parallels appear… but I have to say, the final shot was absolutely perfect.

We re-watched the previous two movies and the Clone Wars cartoon over the last few weeks, and having seen the entire trilogy, I look at it this way: Lucas gave us 4 hours and 20 minutes of prologue to Revenge of the Sith. That’s all Episodes I and II are: Palpatine setting up his dominoes and getting everything ready to trigger his ascension to Emperor and elimination of the Jedi.

We had already planned to pick up the original trilogy this week or next, and finish the entire series by the end of the month. On the way home I remarked, “You know, I’m not completely insane, so I won’t suggest watching Episode IV now.” Katie replied, “Actually, I was thinking about it.” We ended up watching Star Wars: A New Hope (second-worst title in the series, but it gets a pass since it was tacked on in re-release) starting at 11:00.

It’s strange. The Phantom Menace and Attack of the Clones didn’t really change my perspective on Darth Vader much, aside from wanting to add “Now this is pod racing!” to the Death Star trench. Having actually seen the transformation, I really do see Vader differently. Probably closer to the way Luke sees him in Return of the Jedi. Especially in the first movie, where Tarkin is pulling all the strings and Vader is more of an enforcer than a leader, he really seems like someone who is doing what he has to do, like Londo in Babylon 5. Katie said that he’s gotten used to power, and is unwilling to give it up.

One of the great things about the prequel trilogies is seeing the Jedi in their prime, at least as far as their martial arts are concerned. The climactic duel between Obi-Wan and Vader above the volcanoes of Mustafar is no exception. Unfortunately, going from this movie to the original makes the rematch on the Death Star look pathetic by comparison.

On to spoilers. The good, the bad, and the ugly. END_OF_DOCUMENT_TOKEN_TO_BE_REPLACED

I had set this spam sample aside without really looking at it back at the end of March. As I checked the folder this morning, the scammer’s supposed name jumped out at me.

I AM WRITING TO LET YOU KNOW HOW I FEEL AND ALSO EXPLAIN THINGS TO YOU THROUGH THIS LETTER AND WILL APPRECIATE IF YOU COULD ADVICE ME ON THIS ISSUE. MY NAME IS VADER DARTH. I WAS BORN IN TENNESSE AND RAISED IN EUROPE AND I NOW WORK WITH THE CO-OPERATIVE BANK IN THE MANCHESTER CITY, UNITED KINGDOM. I HAVE A VERY GOOD FRIEND WHOM I MET IN MY UNIVERSITY YEARS BY NAME FAURE EYADEMA, THE SON OF THE LATE PRESIDENT OF TOGO…

It continues on with the standard Nigerian scam pitch (relocated to Togo) about the relative of the deposed/late leader who needs to transfer a large amount of money through some random person’s account.

Yes, people fall for these scams… but come on, who do they think they’re fooling with an alias like “Vader Darth?”

Perhaps it’s a long-overdue response to the now-infamous 419 Eater successfully baiting a scammer as “D’arth Vader” of Dark Side Industries. More likely someone else didn’t recognize the name when they chose to use it.

I suppose it fits in with the 419 scammer from Tatooine who posted to The Darth Side last month.