Putting a straight-party checkbox on a ballot violates a key design principle: The polling place and ballot should strive to avoid steering people toward specific choices. This is also why some places randomize candidates’ names or stick with alphabetical order.

The human brain would rather work on auto-pilot than think carefully. Give it an excuse to stick with auto-pilot, and it’ll happily do so.

Even if that means outsourcing your vote to the people who chose the slate and designed the ballot.

You can choose to vote a straight-party ticket, but the ballot design shouldn’t influence you to do it. 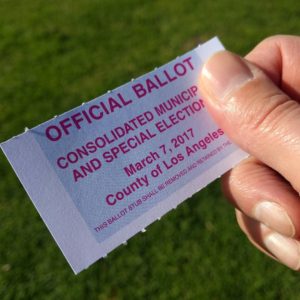 Remember to vote in local elections.

Initiatives, council and school board members, judges, etc. affect you and your community directly. It may not be as exciting as the Presidential race, but it determines who makes decisions in your town, who passes and enforces city laws and regulations, local taxes, which services are offered and how. If the national government wants to drop the ball, states and cities are going to have to step in, and local elections impact how it gets picked up — or doesn’t.

It impacts national politics too: the people elected locally go on to build the pool of state and national candidates. If you care about 2018 or 2020, get out and vote locally to get the ball rolling!

Voter turnout is always lower in off-years than in Presidential election years, and it’s even lower in local elections. That means your vote makes a bigger share of the result than it does when you vote in November – even in an off-year.

So get out there, register to vote if you haven’t, and help make decisions at the local level.

My calendar lists last Tuesday as “Election Patch Day.” (We had a state primary election, which fell on Microsoft’s second-Tuesday-of-the month schedule for releasing software updates.)

I guess you could consider elections to be patches keeping the government up to date.

Edit: On the other hand, there are usually two or more competing “patches” that disagree on how to fix the problems, and even what needs to be fixed.

There are several things about Proposition 16 (on tomorrow’s California ballot) that just make me say, “You’ve got to be kidding me.”

1. The ad campaign is horribly misleading. They’re promoting it as “Your Right To Vote,” but it has nothing to do with your right to vote. I guess “Making it hard for local governments to get into or expand the electricity business” isn’t snappy enough, but that’s what it actually does: it requires governments to hold additional elections (or piggyback on already-scheduled elections) if they want to get into the electricity business.

Whether it passes or not, your voting rights aren’t affected at all.

2. It’s oddly specific. If you look past the main slogan, you’ll see them talk about making sure governments don’t spend large amounts of money without voter approval.* But it only applies to the power industry. And it’s sponsored by Pacific Gas & Electric, the largest power company in the state.

That’s sort of like deciding that theft is a problem, but only making it illegal to steal from your house. If the problem is governments spending huge amounts of money, why focus only on one industry?

The whole thing comes off as being very self-serving, like Microsoft sponsoring an initiative to require a popular vote if a city wants to switch from Microsoft Office to Google Docs or OpenOffice.org.

*Of course, when you think about it, we approved the people making the decision when we voted them into office. 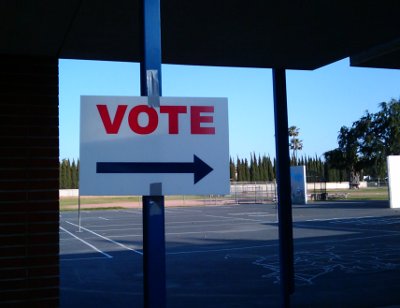 Before: Totally forgot about the special election today. No biggie, the lines will probably be nonexistent even in the evening.

After: Basically no line, but there were a few people voting. The polling place volunteers were playing poker to pass the time between voters.