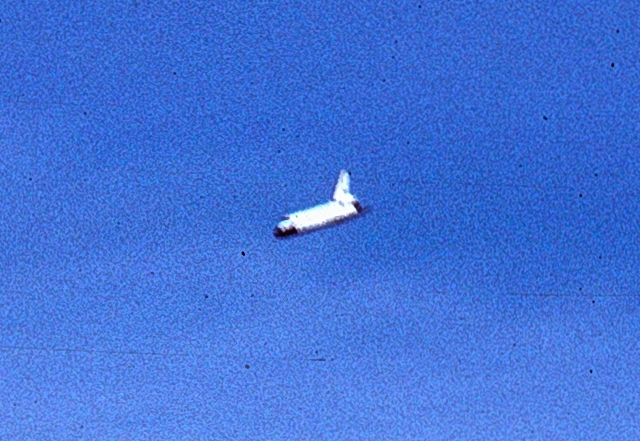 When I was twelve, I went with my mom, brother and a family friend to see the Space Shuttle land at Edwards Air Force Base. It was the first mission after the Challenger disaster, and the orbiter was Discovery.

I took a roll of slides using a manual SLR camera and (for the landing itself) a telephoto lens. With the last shuttle mission ending tomorrow, I decided to track down the slides and scan them. END_OF_DOCUMENT_TOKEN_TO_BE_REPLACED

Rather than getting my hopes up, I’ve been taking an “I’ll believe it when I see it” approach to this. And now, we’re finally back in space!

Here’s hoping the shuttle will be able to tide us over until the next-generation ship is ready. IMO we should have had another type of launch vehicle five years ago at the latest. That way Columbia never would have gone up, or if it had, we could have kept the newer fleet flying and just grounded the shuttles.

On a more personal note, I’m reminded of the time I went to see a shuttle landing. My mom took me and my brother out of school for a day, and we drove up with a family friend to Edwards Air Force Base where we set up camp with a zillion other people on the dry lake bed. We slept in the car, and the next morning everyone tried to get as close as possible to the chain link fence that marked the edge of the public viewing area.

Somewhere in a closet, I’ve still got a roll of slides from that landing. Of course, they had us so far away from the runway that I could barely catch the shuttle with a telephoto lens. I made an 8×10 print of the best slide in my grandfather’s home photo lab, and the shuttle was barely 1½ inches. [Update: I finally scanned the photos.]

And the shuttle that I watched land? It was Discovery, and it was the first flight since the Challenger disaster.