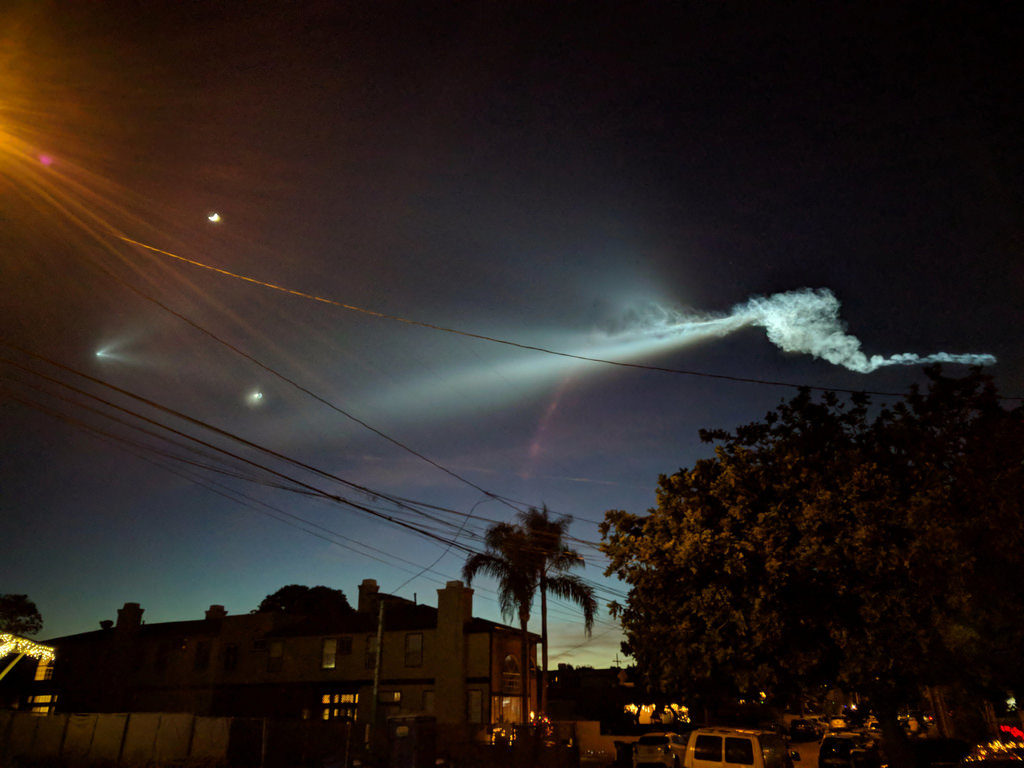 I walked outside and saw a bright spot (presumably the rocket) moving across the sky, trailing an expanding shell of vapor.

I ran back inside shouting “come see this, fast!” and grabbed the better camera, but it wouldn’t focus, so I snapped the top photo with my phone.

The vapor trail persisted for another 10 minutes after the rocket and booster were no longer visible, and it was high enough to continue reflecting sunlight, even though it was an hour past sunset. 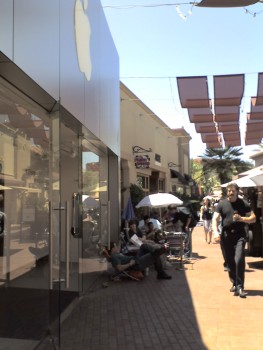 Since I was going to the Irvine Spectrum for lunch anyway, I figured I’d drop by the Apple Store and see how many people were there for the iPhone launch. I walked by around 1:50pm, about 4 hours before the event, and sure enough there were a bunch of people lined up all along the shops.

You can see some lawn chairs and umbrellas. The campers are sort of hidden in the shade, which is why I upped the brightness on the second picture. Of course, I’m sure everyone waiting in line appreciated the shade. Those shadows will only get longer over the course of the afternoon, and while there’s a nice breeze once you get out into more open areas, the corridors of the mall are better at channeling people than wind. 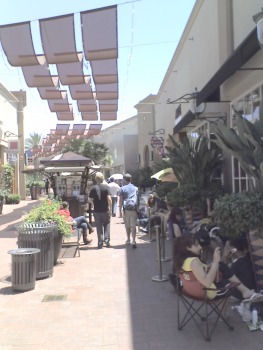 When I walked by the first time, I only noticed the line running to that corner you can see at the end, maybe 3 storefronts down. About 10 minutes later, after stopping at Kelly’s Coffee, I saw that they were wrapped around that corner, almost the entire length of Forever 21, and stopped at the edge of the patio for the restaurant next door.

Not a huge line—I’ve waited in much longer lines for movies—but bigger than I expected for a phone.

The waiting is over!

Most of the changes since 1.0 have been under the hood. The most noticeable are probably the vastly-improved update system, rearrangeable tabs, a one-button function to clear all private data, and a new preferences setup. There are also improvements to Mac OS X integration (though not as much as one might have hoped for), performance, pop-up blocking, etc. From a web developer’s POV, there’s a lot of neat stuff including partial SVG support and the new <canvas> element from WHATWG (and of course improved HTML/CSS/JavaScript support).

If you’ve already installed Firefox 1.5 Release Candidate 3, this is exactly the same program. Nothing’s been changed except the name on the installer.

On the annoying side, they’ve temporarily closed Spread Firefox to prep for their video marketing campaign. I hate it when people close down a site to prep for a relaunch. It’s not like a building, where you have to keep people away so you can remodel. You can do all the remodeling on a copy, and just drop it into place when it’s done.

Then there’s the drag-n-drop/save-as bug in Linux, where the first time you try to rearrange tabs or bring something up with a file picker, it decides the GTK theme has changed and hangs while it redraws everything. They’ve fixed it for the long-term, but the fix just went in yesterday, so it’s not in the 1.5 release. I’d guess the Linux distros will apply the patch when they build their own packages, and with luck the fix will show up in 1.5.1.

And on a completely unrelated note, this is the 1,000th post on this site. *whew*! 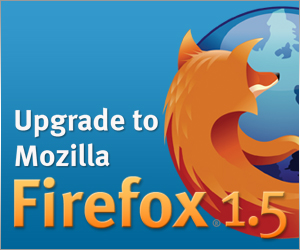 Rather than getting my hopes up, I’ve been taking an “I’ll believe it when I see it” approach to this. And now, we’re finally back in space!

Here’s hoping the shuttle will be able to tide us over until the next-generation ship is ready. IMO we should have had another type of launch vehicle five years ago at the latest. That way Columbia never would have gone up, or if it had, we could have kept the newer fleet flying and just grounded the shuttles.

On a more personal note, I’m reminded of the time I went to see a shuttle landing. My mom took me and my brother out of school for a day, and we drove up with a family friend to Edwards Air Force Base where we set up camp with a zillion other people on the dry lake bed. We slept in the car, and the next morning everyone tried to get as close as possible to the chain link fence that marked the edge of the public viewing area.

Somewhere in a closet, I’ve still got a roll of slides from that landing. Of course, they had us so far away from the runway that I could barely catch the shuttle with a telephoto lens. I made an 8×10 print of the best slide in my grandfather’s home photo lab, and the shuttle was barely 1½ inches. [Update: I finally scanned the photos.]

And the shuttle that I watched land? It was Discovery, and it was the first flight since the Challenger disaster.