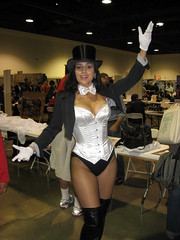 On the last weekend of October, I made it out to the second annual Long Beach Comic Con. It’s shaping up to be a very artist–, writer– and dealer-focused convention.

If you just want to see the photos, check out the photo set on Flickr. Otherwise, read on! 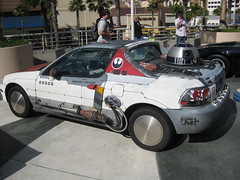 The first thing everyone noticed was the row of themed cars out in front of the convention center: A Camaro painted up as Bumblebee, a replica of KITT from Knight Rider, cars from less geeky shows like Starsky and Hutch and (IIRC) Magnum, P.I.…and a car that had been modified to look like a Rebel Alliance small fighter, complete with an R2 unit!

The main floor at Long Beach was bigger this year than last, though nowhere near as big as Anaheim. Unlike Anaheim, they used most of their space.

All the publishers were clustered near the entrance, with Aspen and BOOM! the most prominent, followed by Top Cow, Image and Avatar in the next row with other small press, along with the celebrity autograph area off to one side. 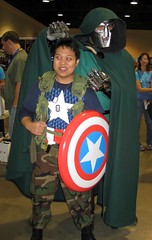 The rest of the floor was structured with a huge Artist’s Alley at its core, surrounded by retailers on either side. Actually, it would be more accurate to say that it was two Artist’s Alley areas with dealers wrapped around them in a sort of F shape.

If you went to Anaheim Comic-Con this year, remember how big the celebrity signing area was, and how small the artists’ area was? Flip it. My gut instinct says that there were more artists with tables here than there were in San Diego, but then it could just be that they’re a bigger percentage of the smaller space.