Let’s just say the kid was not impressed with Attack of the Clones.

To be honest, I think it’s the weakest of the prequels and of the six that George Lucas was actually involved in.

The Phantom Menace is better than I remember.

It’s well constructed, and there are incredible subtleties and thematic elements hidden among the flashy (and cheesy) A-plot. It’s about dualities, symbiosis, and most of all, misdirection. An elaborately costumed decoy queen, an invasion waged to maneuver the Senate into giving Palpatine more power, and so on. And the movie is that too: a big flashy effects and battle and comedy extravaganza in front of a master manipulator quietly going about his scheming.

I mean, yeah, the dialogue isn’t very good, and there are all the horrible stereotypes, but the core of the story is thematically solid.

Attack of the Clones…is not.

I could see what they were trying to do, but it doesn’t hold together as well, and the story hinges on a romance that is, frankly, unconvincing. It’s like an early draft of a script went into full-blown production, but no one could tell Lucas, hey, maybe you should try something different here, or keep working on the dialog there, etc.

The effects are amazing. The music — John Williams is still at the top of his game here, and “Across the Stars” is one of the best Star Wars pieces written (up there with “Duel of the Fates” IMHO). There are cool concepts and interesting characters, and good actors doing the best they can with what they have. (When they can.)

And there are great moments too! Dooku telling Obi-Wan the absolute truth about the Republic having fallen under the sway of a Sith Lord, just in a way that Obi-Wan can’t believe it. Or Padme quietly picking the lock on her handcuffs in the background while Anakin and Obi-Wan argue in the foreground.

Mainly I think it needed more script revisions. And to let someone else direct it.

Previously posted on Mastodon. Cross-posted as reviews of TPM and AotC. 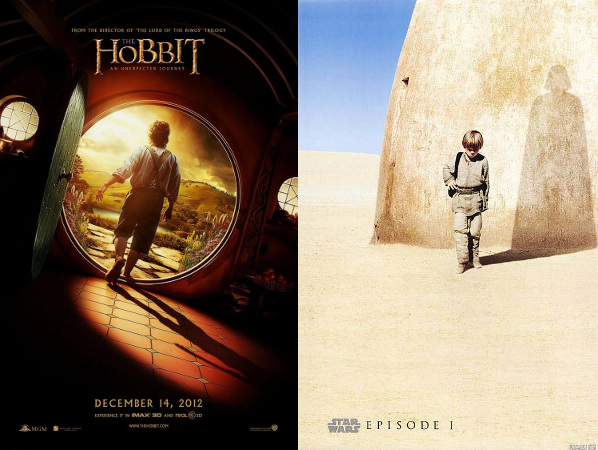 As the release date approaches for the first movie in The Hobbit triogy, I find myself comparing the circumstances to the Star Wars prequels. Why? In both cases you have…

The Phantom Menace came out 22 years after Star Wars: A New Hope and 14 years after Return of the Jedi. An entire generation of children grew up with the original trilogy and were adults by the time the prequels started. And with 14 years of no Star Wars films, the prequels had to justify the wait.

With Lord of the Rings, it’s only been 10 years since Fellowship of the Ring, and 8 since Return of the King. We’ve spent half the time away from Middle Earth as we did from that galaxy far, far away. Children have become teenagers, and teenagers have become adults, but there isn’t quite the same level of “My childhood is back!” nostalgia that could make or break the films for a large section of the audience.

According to IMDB, George Lucas stopped directing after the first Star Wars film in 1977. He kept writing and producing, of course, but he hadn’t directed a film in two decades when he picked up The Phantom Menace

Peter Jackson may have slowed down a bit, but between wrapping up the extended edition of Return of the King in 2004 and picking up The Hobbit in 2010, he’s directed King Kong and The Lovely Bones.

This is a big one. The Star Wars saga was an original story by George Lucas. When he wrote Episodes I-III, he was free to do anything he wanted as long as it didn’t contradict Episodes IV-VI. The Hobbit films are based on Tolkien’s novel, the appendices from Lord of the Rings, and his published notes. The core of the story is a lot more well-established.

Zillionaire George Lucas wrote, directed and produced the Star Wars prequels, financing them himself. Nobody was in a position to tell him no. On one hand, this is good, because there weren’t any suits with more money than talent to tell him to add an extra car chase here, or add a love triangle there, and does Revenge of the Sith *really* need to be PG-13, can’t we dial down the violence a bit? On the other hand, it also meant no one could say, “George, don’t you think Jar-Jar is a little over the top?” or “This fireplace scene just isn’t working.”

Peter Jackson lucked out with the Lord of the Rings trilogy in being able to mostly do his own thing. But the legal battles and rights-wrangling that have caused The Hobbit to take so long to reach the screen indicate that the studios might be trying to exert their influence to “protect” their investment (which usually seems to involve killing the goose that lays the golden eggs). Certainly the decision to stretch the story out to three movies sounds like the studio trying to multiply their ticket sales, though I can also see Jackson and Weta deciding that this is their last chance to explore Middle Earth, so they might as well make the most of it.

Well, it’s just one week until The Hobbit: An Unexpected Journey opens and we all get to see how it turned out. One thing that’s definitely changed for me: Unlike Episode I, there’s not a chance that I’ll be standing in line for hours to see a midnight (or 2AM) showing. I can wait until Saturday afternoon.