So, NPR ran a post by an intern who doesn’t get the whole paying-for-music thing — or, rather, realizes now that she ought to, but doesn’t want to pay for physical media of specific songs or albums.

The Trichordist responded with an open letter about the ethics of file sharing, which is a great read from the artist side of the fence, but also mixes up several issues. In particular, it misrepresents a large part of the “other side.” He starts off saying that Emily White seems to have succumbed to “false choices” presented by “Free Culture,” then goes on to present his own false choices, somehow managing to characterize rampant piracy, Creative Commons*, and the tech industry as if they’re all the same thing.

The issue is not simply “pay for everything” vs “take what you want because you can.”

Among other things it’s about recognizing that distribution channels have changed, so business models must as well. It’s about trying to come up with a system that doesn’t put unnecessary roadblocks in place. It’s about enabling those who do want to share their art in different ways to be able to do so easily.

Edit: It’s also about, and here’s where the tech industry comes in, recognizing that technology does change the legal landscape. Remember the debate over whether Google should pay up for thumbnails in image search results? (Kind of like requiring card catalogs to pay to use the title of the books they refer to.) Or Congress trying to decide whether copying a media file or program from disk to RAM constituted a legal “copy” subject to copyright restrictions?

Edit 2: And then there’s the matter of opening up the gray areas, or rather the areas that most of us intuitively see as gray, but that current copyright law treats as black and white, such as fan art and fan fiction. Technically, a six-year-old’s scrawled Mickey Mouse is illegal. Technically, software companies can tell you how many backups you’re allowed to make. Enforcement is spotty (fortunately), but that means if someone wants to get you in trouble for something else, all they have to do is report you.

If you want to make music and I want to listen to it, I’m happy to pay you for it. I have a lot of music on my iPod, and yes, I’ve paid for it. My last MP3 purchase was a week ago. Heck, I’ve bought music from Jonathan Coulton, who gives it away for free (under a Creative Commons licence, I might add).

So yeah, I’m willing to pay for music. But I don’t want to have to pay separately to listen to the same music on my home sound system, on my computer, on my phone, and in my car because your publisher has decided to put DRM in place that makes it difficult for me to move that music around. If you live on the other side of the planet from me, I want to be able to give you money directly and download the song over the internet instead of having to wait for publisher A to make a deal with publisher B and ship physical media around.

Technology has presented us with new ways of distributing art. Something like Pandora or Spotify would have been impossible before broadband internet. So let’s find ways to make it work for everyone instead of characterizing everything that isn’t pay-per-song as no better than looting.

It doesn’t help to complain about one set of false choices and then present your own.

*He cites the Creative Commons’ tax return to indicate the backers of the Free Culture movement, so it seems clear he looks at them as the same thing.

Imagine that a group of people who don’t drive much, don’t understand how cars work under the hood, and have never studied traffic engineering decide that they’re going to stop speeding by requiring that cars automatically slam on the emergency brake and lock the controls the moment they exceed the speed limit — or the moment someone reports that the car has exceeded the speed limit.

Note that I didn’t say anything about turning the engine off, or putting it in neutral. Or only doing so in places where the speed limit is properly posted. Or worrying about whether there’s a car behind them that will have to slam on their own breaks to prevent a pile-up. Or actually checking that the car really is speeding before acting on the report.

Now imagine that criticisms and objections raised by actual drivers, the auto industry, traffic engineers, highway planners, and city planners are all dismissed as speeder propaganda.

That’s basically what’s going on with the “anti-piracy” bills being discussed in the House (SOPA) and Senate (PIPA/Protect IP).

If you live in the US and you use the Internet, you need to know about this. There are two proposed laws, SOPA and Protect IP, that would set up a system to block access to websites deemed to be “infringing,” in the name of stopping piracy. Of course, “infringing” could refer to the actions of one user on a large site, like, say, Facebook or Wikipedia. Imagine if someone at Warner Bros. filed a complaint about someone’s fan art on DeviantArt, and the government blocked access to the entire site. Sort of like shutting down an entire mall because one shopper was accused (not even proven!) of wearing a counterfeit Rolex.

Of course, once a system like this is in place, we all know it’ll never be abused, right?

And that’s not even getting into the technical implications of the bills, which would put an extra burden on tech startups and actually undermine efforts by the US government itself to make the internet more secure.

Looking at the list of “most popular” links on Del.icio.us, it seems someone has scanned the entire Book of Bunny Suicides and its sequel, both by Andy Riley.

Good grief, people—you can pick up the book for $7.00 at any bookstore. I can understand posting a couple of excerpts, but from what I can tell, these people have scanned and posted the entire book. They haven’t even credited the source! In the blog postings that show up on a “bunny suicides” search, most of them don’t even seem to know where the cartoons are from. Heck, even with pirated MP3s you usually know who sang the song.

Google has pulled a few of the sites from their index in response to a DMCA complaint. (Interestingly, Google themselves linked to the Chilling Effects entry.)

It always amazes me how rude people can be. 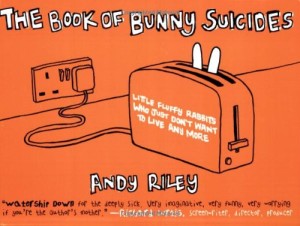 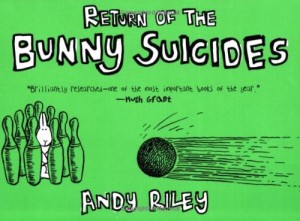