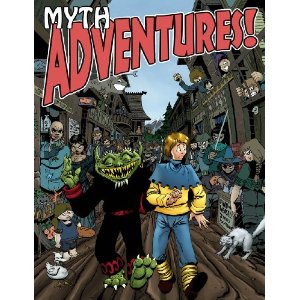 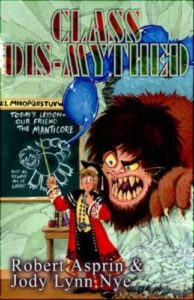 Phil Foglio once again illustrates the Myth Adventures universe in the next book in the series: Class Dis-Mythed.

I don’t know how much of it is Jody Lynn Nye’s influence and how much of it is just Robert Asprin being re-energized about the series, but since they started collaborating the books have improved drastically. The new ones have much more of the feel of the early series, before Asprin burned out on it and spent a decade working through writers’ block.

(via the Studio Foglio newsletter.)

Fact #1: During my three-and-a-half days at Comic-Con last week I frequently thought how odd it was that, unlike past years, I no longer had a list of old comics I was trying to track down, and in some ways it was too bad that I didn’t have a reason to trawl through the dealers’ room.

Fact #2: Every day, eBay sends me an email if new items have popped up on a set of saved searches. I’ve been trying for several months to track down the rest of the WaRP Graphics Myth Adventures series (an adaptation of Robert Asprin’s Another Fine Myth with art by Phil Foglio), and every day I’ve grumbled that all that shows up are the issues I already have or the Foglio-illustrated editions of the novels.

I just connected these two facts. >:-(