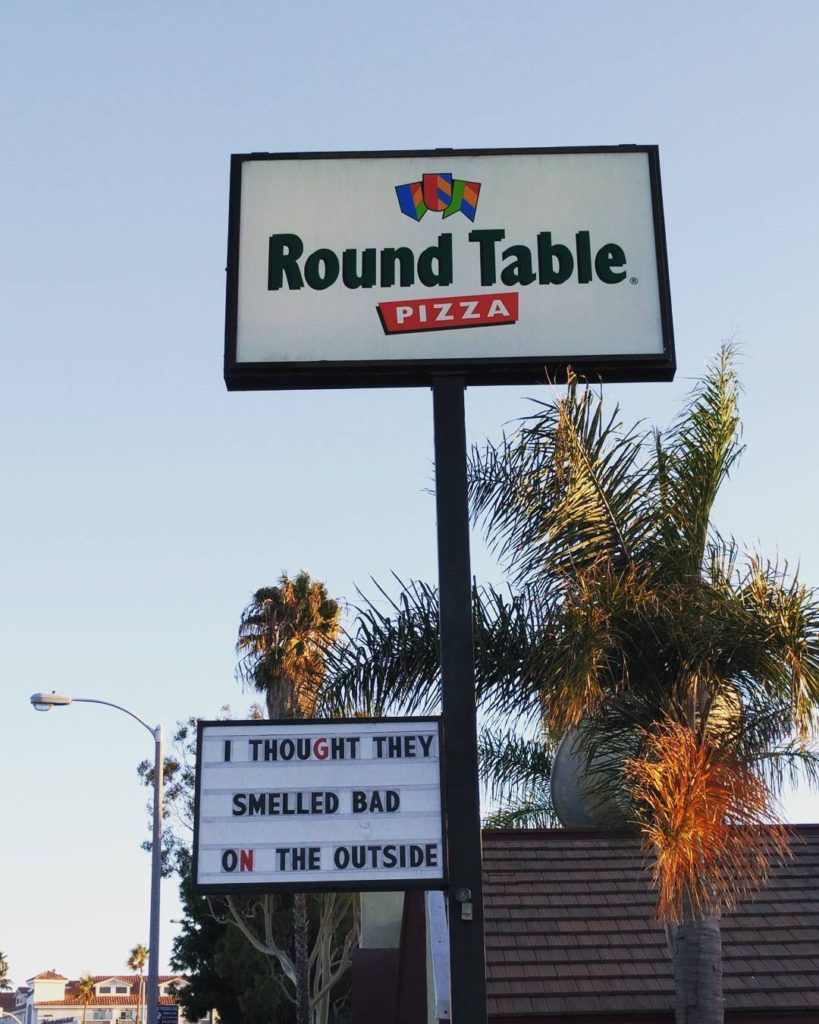 I do like their pizza and their movie quote habit, but this one might not have been the best choice for a place that serves food 😛

Randy Cassingham of This Is True has been driving a weekly Twitter event he calls Pet Peeve Wednesday, with the hashtag #PPW*. Some items I’ve posted about things that Just Bug Me(tm). I guess I shouldn’t be too surprised that they fall into two categories, tech and language.

“I think the most exciting science is done in places where you don’t understand what’s going on. Once you’re not confused about something, it’s time to move on to the next problem.” — Brian Jackson, NASA, in Death Valley mystery: What makes rocks wander.

One of the panels I hit on Thursday was called “Twisting Genres,” and brought in a bunch of authors who had all written books that mixed and matched traditional genres. (western and horror, historical fiction and dragons, etc.) It was essentially the same topic as the “Blurring the Lines of Genre” discussion I saw at Westercon, but with a completely different set of authors who stayed a bit more on-topic (possibly because they had a moderator).

Of course, just because they stayed on topic doesn’t mean they weren’t funny.

“Where do you shelve that?” Maryelizabeth Hart on the impact of mixed-genre novels on bookstores.

“I’m part-Australian, and required by law to put Australian content in my book. It was either that or the Sydney Opera House.” — Scott Westerfeld, explaining the presence of a Tasmanian Tiger in the Leviathan Trilogy.

“You have these ideas in your head and they start having sex with each other, and these strange webbed babies come out…” — Daryl Gregory(?) on how genre mash-ups are born.

“Awesome plus awesome does not always equal two awesome. Sometimes it’s an abomination, like a Reese’s Peanut Butter Cup.” — China Miéville, a few minutes after Naomi Novik cited them as an example of how mixing things does work.

Something that came up at both this panel and the Westercon discussion was that mainstream literature is a genre in itself, with its own sets of rules and expectations. I think it was China Miéville who described it as a genre with a successful thirty-year marketing campaign to convince people that it isn’t a genre.

Justin Cronin explained that he crossed over from mainstream literature when his nine-year-old daughter was terribly concerned that his other books might be boring, so he launched a project with just one rule: it must be interesting. He eventually submitted The Passage under a pseudonym so that his name wouldn’t set up the wrong expectations.

Robert Masello said he once had an editor try to “help” him by explaining that they could take the supernatural elements out of his story and it would work just fine… (Ouch.)

One author had a friend who had written a serious novel with the word “Spices” in the title, and got on a radio show to promote it. The host hadn’t read it, and introduced it as a cookbook. So he spent the next half hour giving out recipes. “Why didn’t you correct him?” “It’ll sell more as a cookbook.”

The question was asked whether there are any two genres that are inherently disastrous. Naomi Novik suggested that no two genres were automatically so. China Miévelle said that his brain immediately responded to that question by trying to think of ridiculous combinations…and then figure out how to write a brilliant book with them.

But yeah, a driver’s manual with an unreliable narrator is probably a bad idea.

Quotes from “Once Upon a Time,” a panel at Comic-Con International in which fantasy authors discussed whether epic fantasy requires larger than life heroes.

Brandon Sanderson: “I would say, if Tolkien did it, it’s okay.”

Maryelizabeth Hart: “We’re gonna start with Patrick [Rothfuss] so he can’t argue with anyone.”
(later)
Patrick Rothfuss: “I just wanted the opportunity to disagree with myself.”

Megan Whalen Turner on the typical vagueness of prophecies: “What if there was a prophecy that said, ‘The One will come. And he will have a 63% chance of defeating…”

Brent Weeks on the X saves Y structure: “I mean, is there…nobody saves nobody?”
Megan Whalen Turner: “They all die.”
Brent Weeks: “And that’s George Martin.”