Last night, I did something I haven’t done in ages: I read a bunch of this week’s new comics.

Over the last two years I’ve gotten behind on just about every comic book I read, and the further behind I get, the harder it is for me to catch up. (Making things worse: I stopped organizing comics as I got them, so I had to find a solid run in order to catch up on it.) After a couple of colds kept me on the couch earlier this year, I started finally making some headway, and I’ve reached the point where I’m current on six — count them: six ongoing comics:

Saga: The sci-fi drama about family is also the book I’ve kept up with the best, despite the fact that I absolutely must wait until the inquisitive six-and-a-half year old is in bed before I open the book. I did fall four months behind at one point, after Isabel’s disappearance. I just couldn’t bring myself to pick it up for a while. I didn’t want to know who was next.

Astro City: This one was “easy” to fall behind on because it’s isolated from other series and the stories tend to be short by modern standards. This also made it really easy to catch up on ~15 issues because I could read one or two at a time and still get a full story. The sequels to classics were fun, and I’m fascinated by what’s been revealed about the Broken Man.

Flash: This book really goes by fast. Seriously, with double-shipping, I keep picking up an issue and discovering that I’m already two or three behind.

Titans: I missed an issue of the crossover earlier this year, and my local shop sold out of it, and I finally decided to just buy the missing issue digitally and plow through. I really want to like this book more than I do, but I’m beginning to think it may be time to drop it after the current story ends. (It’s still better than the DEO kids era)

Jessica Jones: I was a fan of Alias back in the day, and while this is a little more plugged into the mainstream Marvel Universe than I remember that book being, it’s still got the same snarky sensibility. Just reading her complaining to Maria Hill about LMDs was hilarious.

Lady Mechanika: The first series of this steampunk adventure was delayed so long I decided to wait until it was done before reading any further. And then the gap hit. I felt so bad at last year’s Long Beach Comic Con when I talked to the writer and had to admit to her that I hadn’t read it in over a year. I finally caught up, so if I run into her or the artist this year, I can actually talk about the comic! My favorite has been “Tablet of Destinies,” both in terms of story and for the way it reframed alchemy as the misunderstood remnants of ancient nuclear physics.

I’m still behind on I Hate Fairyland and Saucer State (and Shutter, but that’s finished), but I’m at the point where I’m able to re-evaluate my pull list and take another stab at paring down my collection. Which has led to some interesting decisions (but that’s for another post).

I also finally got around to: END_OF_DOCUMENT_TOKEN_TO_BE_REPLACED

After reading this series of posts on Revisiting The Sandman, I think it’s just as well that my copies are in storage right now.  Otherwise I wouldn’t be getting any sleep at all tonight.  (via Neil Gaiman.) 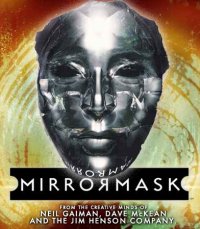 Yesterday I mentioned the MirrorMask panel at Comic Con. Neil Gaiman and Dave McKean were both there to talk about the movie and play a trailer-like clip they had put together the night before.

MirrorMask came about when Sony noticed that while Labyrinth and The Dark Crystal didn’t do very well in theaters, over the years they’ve become strong, steady sellers in the home video market. So they went to the Jim Henson company and asked if they could do a fantasy film in the same vein, on a budget. So Lisa Henson called up Neil Gaiman by way of asking for Dave McKean, and explained the situation: They only had a $4 million budget, but they wouldn’t have any studio interference. They went on to say they knew they couldn’t afford Neil to write the screenplay, but could he at least come up with a story, at which point he said (Edit: corrected quote) “If Dave’s directing it, I’m writing it.” END_OF_DOCUMENT_TOKEN_TO_BE_REPLACED