I set up a slide-show screen saver on one of my computers at work. To start, I dropped in some of my wallpapers, including several from the Astronomy Picture of the Day, then snagged some photos from my website to add a little variety.

What surprised me was how blurry the older photos were. Most of the digital photos I have older than 2003 are scanned in from 3½×5″ or 4×6″ prints. And half of those were done with a point and shoot camera. Even the photos that I scanned at a higher resolution tended to be much blurrier than the 5-megapixel images I’ve been taking since we went digital.

It also pointed up a problem with the point-and-shoot camera and lighting. Compare the following photos from my American Southwest page: 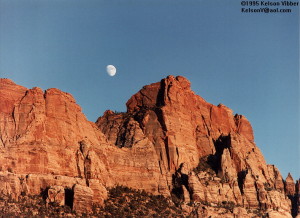 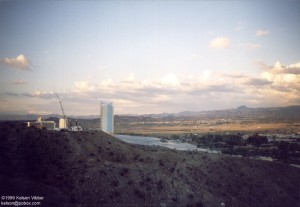 The one on the left (of the moon above a rock ridge) was taken with an old SLR camera that my grandfather gave me when I was maybe 12 or so. It was entirely manual except for a built-in light meter. I loved the control and the photo quality I could get out of it, but it was big and bulky, and eventually I stopped carrying it.

The second photo (with the one tall building sticking up out of nowhere) was taken with the point-and-shoot camera I picked up during high school and used right up through that first Hawaii trip. Notice the difference in the sky? The sky does vary in color—you only need to walk outside on a clear day to see that—but something about that camera just collected less light from the corners of the image. The Laughlin picture is a good example because you can see the circle continue across the lower half of the frame as well.

The ones from the 2003 Hawaii trip are actually not too bad, even though they were done on the cheap camera, because they were scanned straight from the negatives by Kodak. I suspect they have a slightly better scanner than I do! 😀

The world of email viruses has changed. In the old days, they would piggyback on the messages you sent, or make your regular mail program send them out while you weren’t looking. These days they send the messages themselves, so they pick a fake return address from the same source as its list of victims: address books, web caches, and so on.

The return address on a virus like Sobig doesn’t mean crap.

So why the heck are all these idiotic virus scanners (*cough* Declude *cough*) sending me messages saying “You sent us a virus!” when a cursory glance at the headers clearly shows that it originated on the other side of the planet?