I was reading at lunch today, mostly ignoring the music playing in the background, until my brain latched onto a familiar sequence of notes and started trying to place it. Wait… That couldn’t be a dance/pop version of “Popular” from “Wicked,” could it?

But I’d heard dance mixes of “Don’t Cry For Me Argentina” and the Smurfs theme, and a Techno version of “Phantom of the Opera.” So it might be…

There was too much noise to Shazam it, but a search for “Popular Wicked dance mix” found it on the first try: “Popular Song” by Mika and Ariana Grande. 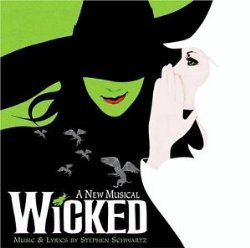 I’ve been catching up on last year’s movies. I finally saw Frozen last week, which prompted me to track down the soundtracks to both that movie and Tangled (more about that later), and listening to those prompted me to dig out the cast album for Wicked for the first time in, well, forever.

I was reminded of why I hadn’t listened to it much. Aside from a handful of songs (“Corner of the Sky” and “Colors of the Wind” come to mind immediately), something about Stephen Schwartz’s music just doesn’t stick in my head, and Wicked isn’t an exception. No matter that I like the story, that I like the characters, that I like Idina Menzel and Kristin Chenoweth…the songs just don’t stick. Not even “Defying Gravity,” except for the title refrain.

But remember how I mentioned I was catching up on last year’s movies? I had a disc out from Netflix of Oz: The Great and Powerful, and several episodes of Once Upon a Time on the DVR…the ones introducing the Wicked Witch as the villain for this half of the season. And it was weekend of Emerald City Comicon.

It seemed appropriate to continue catching up.

For the record, so far I much prefer Zelena (OUAT) to Theodora (Oz:TGAP) as far as characterization goes (she has some), though I haven’t seen enough to decide how she stacks up against Elphaba.

Spam subject: Wicked in the Sack. Come on, spammers, leave Elphaba out of this! #