Picking up the oft-delayed vacation photos series, here’s the first half of our trip out to Hawai‘i Volcanoes National Park and the volcano Kilauea.

Kilauea is often referred to as the most active volcano in the world. To give you an idea why, its latest eruption started in 1983… and is still going!

We got to the park fairly late in the day, partly because we underestimated the amount of time it would take to drive there from Kailua, and partly because we stopped at various points of interest along the way. It was mid-afternoon by the time we got to the visitor’s center, where Katie stood transfixed by the lava videos and I checked out the maps.

We stopped for a late lunch at Volcano House, an old hotel built on the edge of the Kilauea Caldera. Check out the view! (The image links to a slightly larger copy.)

The crater Halema‘uma‘u, which contained a boiling lava lake from 1823–1924, is visible near the center. The southern slope of Mauna Loa rises in the background. The whole caldera is roughly elliptical in shape, and Volcano House is one end of the longer axis. I don’t remember exactly how far it is from one side to the other, but judging by the map I’d say it’s about 2×3 miles.

Off to the right, behind a tree in the panorama, are the steaming bluffs. Groundwater gets heated by the magma below the volcano and seeps out through cracks all over the caldera. 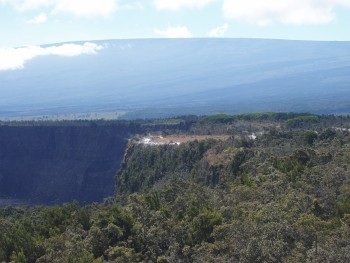 We drove around Crater Rim Drive—three guesses where that goes—and as it turns out our first stop was those steaming bluffs. Fortunately, the wind was blowing the steam away from the vents while we were there. It’s a 0.1-mile “hike” from the parking lot to the edge. There was a group of schoolchildren on a field trip there, and we could hear their guide telling them about the geology and about various Hawaiian folk tales relating to the area. You can also see Volcano House in the background. 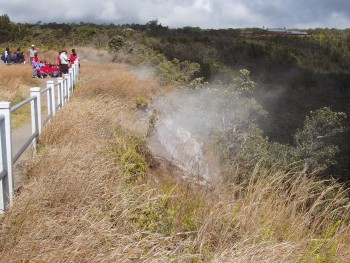 There are actually vents scattered all around the area, and we got a chance to look at one up close, where you can see all the mosses and mineral deposits. 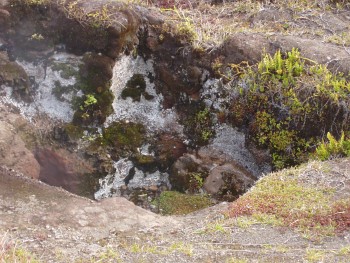 This part of the island is comparatively arid (and the “repaving” it gets every few decades can’t help much), but the moisture from these vents creates its own mini ecosystem. Compare this to the dry grass in the previous shot: 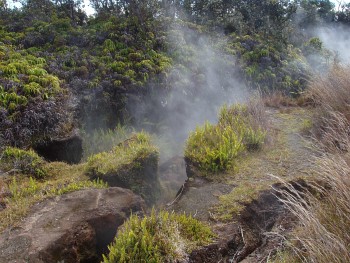 This next shot was taken from the same spot, looking across the crater at a lava dome. I think it’s Pu‘u Pua‘i. 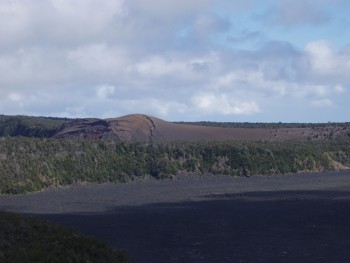 Moving along, about a third of the way around the rim are the Hawaiian Volcano Observatory and the Jaggar Museum. We didn’t have time to stop in, but we did stop for the view of Halema‘uma‘u, which is much clearer from here. 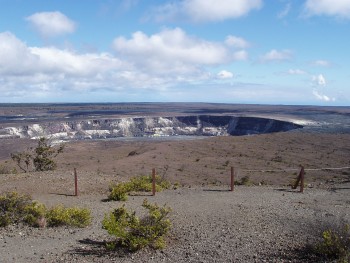 We also got a view of one of the many instruments used to measure seismic activity in the area. Because Kilauea is both extremely active and comparatively safe, it’s being monitored constantly. 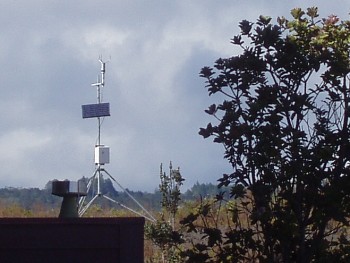 As you drive around the larger crater, you start seeing signs by the side of the road that say things like “1971 Lava Flow” or “1982 Lava Flow.”

At the opposite end of the crater from Volcano House, there’s a trail head for a short hike out to the Halema‘uma‘u Overlook. (Actually, the trail crosses the entire larger crater.) This area is riddled with steam vents and warnings about hazardous fumes. I couldn’t help but think of Boromir saying, “The very air you breathe is a poisonous fume.” It was around this point that Katie started staying in the car while I went out to explore.

The overlook takes you right up to the edge of the 3400-foot Halema‘uma‘u Crater. From that close a wide-angle lens can’t capture the whole thing, but the floor of the crater looked rather inhospitable, full of cracked, smoking lava. 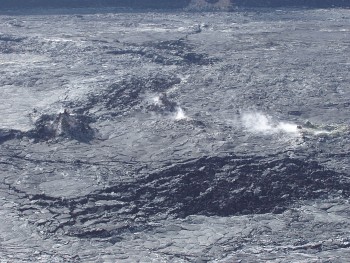 From the museum I had spotted what looked like yellow patches on the side of the crater wall. I wondered if they were sulfur deposits. From the overlook I could see that they were…and they were still steaming. 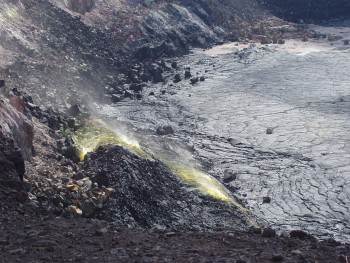 This is near the road on the south rim, east of Halema‘uma‘u and probably in the 1982 lava field. What struck me the most was the red rock. It’s hard to see in this picture, but it’s a deep red, and not the color I’m used to seeing in rock colored by rust. 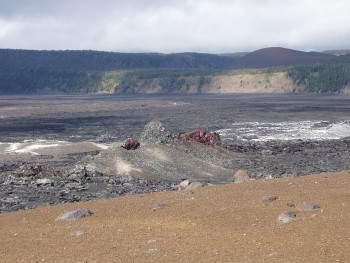 Just outside the main Kilauea crater is a smaller crater called Keanakako‘i. This apparently used to be the site of an adz quarry. You can see more of that really red rock at the right edge, near the base. 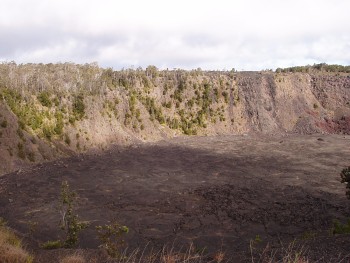 Across the road is a short loop trail to some lava fissures that erupted in (IIRC) 1974. Try to imagine sheets of lava launching up like curtains. 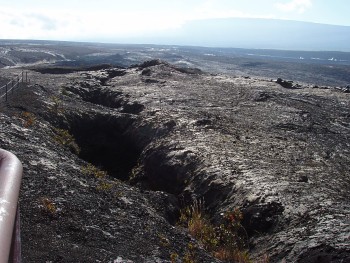 Yet while most of the recent decades’ lava has yet to break down enough for plants to take hold, these fissures are collecting just enough dirt. This one was full of ferns. 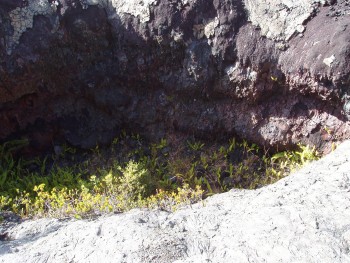 Next: lava tubes and rain forests, then more craters, danger signs the sea… and an active lava flow.

2 thoughts on “A Visit to Kilauea”