I was idly wondering about the way super-heroes and villains are named—not the code names, but the actual names like Clark Kent, Matt Murdock, etc. Was Hunter Zolomon destined to become Zoom? Was Roy G. Bivolo doomed to become the Rainbow Raider the moment his parents named him? And why do so many people with the initials L.L. gravitate toward Superman? 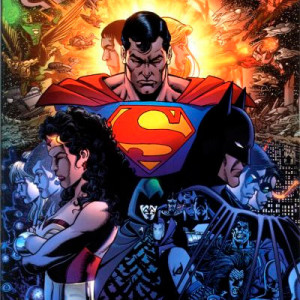 “Obviously, he’s a ta’veren!” Katie said. I laughed for a second, but then remembered an interview I’d read about Infinite Crisis. It actually fits.

Ta’veren is a term from Robert Jordan’s The Wheel of Time that refers to a person who forms a focal point for history (or, from another perspective, destiny). Threads of probability bend around them, and the unlikely becomes likely. Babylon 5 referred to the concept as a nexus. “You turn one way, and the whole world has a tendency to go the same way.”

Well, just before Infinite Crisis #1 hit the stands, Newsarama did an interview with Dan DiDio:

NRAMA: …Back towards the build-up a little – a seed that has been sown and is fully bearing fruit now – when Superman, Batman and Wonder Woman aren’t on the same page…can you explain a little of the ripple effects and resultant instability of the DCU? Are there specific events that can be pointed to because the three weren’t standing strong, that allowed the villains of Infinite Crisis to gain a foothold where they wouldn’t have had one, previously?

DD: That’s a big “wait and see” since it’s a big part of the story.

NRAMA: Do the three realize that they are the root of the current instability?

DD: At the start of the story, no. They do not realize how much their problems are affecting the heroes around them.

This aspect of the story forms a key scene in issue #1, in which the DC Trinity are standing in the ruins of the JLA’s watchtower and arguing over who and what is at fault. Yes, the three most important characters in DCs pantheon, not trying to battle the chaos besetting the world, but arguing. And the world sinks further into madness.

It seems that in some ways Infinite Crisis, like The Wheel of Time, is about a trio of ta’veren facing the end of the world.

One thought on “Ta’veren of the DCU”