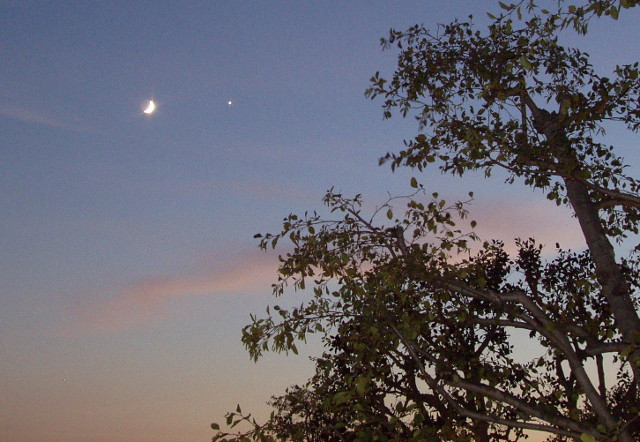 This view of the Moon and Venus was taken from our apartment balcony earlier this evening.

I also took a picture yesterday, from the top of a parking structure near John Wayne Airport (we went to a show at UCI later that evening.) You can see the red trail an airplane left as it crossed the frame: 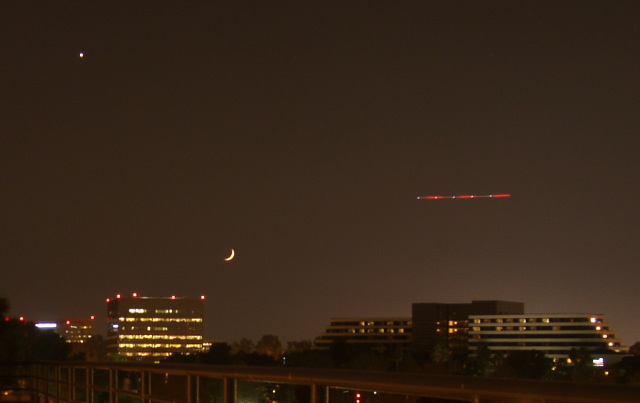 Having seen that pairing last night, I knew I had to be ready to catch it today! I figured the Moon would be a lot closer, but I hadn’t expected it to actually pass Venus tonight. It really gives you an idea of how far the Moon moves in 24 hours. (or, in this case, roughly 23 hours, since yesterday’s picture was taken at 6:00 and today’s was taken at 5:10).

To be honest, I wasn’t actually certain it was Venus. It was my first thought, because of the brightness and the color, but I kept thinking it was too far from the sun. I kept trying to convince myself it was Jupiter or maybe Saturn (it wasn’t red enough for Mars, and besides, I’d seen Mars on the other side of the sky the night before). When I looked it up and realized it was Venus, I started remembering my days in high school when I would walk to school for a 7:00am “zero period” class. In winter it would sometimes be just dark enough when I left to see the planets and the brightest stars. I would keep my eye on Venus as the sky brightened, trying to see how late I could still see it by knowing exactly where to look.

3 thoughts on “The Moon and Venus, sitting in a tree”