We went to see Scott Shaw’s show, Oddball Comics last night. Maybe a block away from the Acme Comedy Theatre, we saw this billboard: 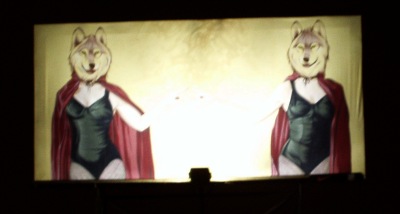 It’s hard to see in the photo, but they’re touching their index fingers together. There’s nothing else in the center of the billboard, just empty space.

As near as I can tell, they’re combining Little Red Riding Hood, the wolf, a mirror universe, and a pair of Vegas showgirls. All of which adds up to a resounding: “Huh?!?”