I spent the first Saturday of November in Long Beach for the fourth annual Long Beach Comic and Horror Con. Despite the name change last year, the show remains focused on comics, and horror feels like an afterthought tacked on to fit with the Halloween timing of the show. (It makes me wonder whether they’ll return to the original name next year, when it’s held at the end of November.)

There were four or five Star Wars-decorated cars outside the lobby and one Teenage Mutant Ninja Turtles van. I was way too amused by a convertible, tricked out to look like it had starfighter engines and gun emplacements, on display with a Yoda statue in the passenger seat. (I figure Jedi don’t ride shotgun, they ride lightsaber.) 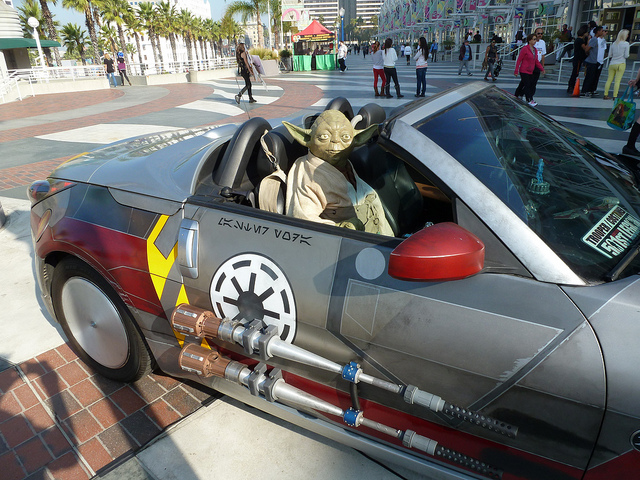 On the main floor, Artist’s Alley continues to be the centerpiece, both literally and figuratively. SDCC has been shoving the artist’s tables off to one end of the insanely-long hall, Wizard tends to put them in the back, and I hear NYCC put them in a different hall entirely (not quite behind a door labeled “beware of the leopard”), but Long Beach has always made a point of putting them right in the center. Publishers at the front, fan groups at the back, dealers to the sides, all wrapped around the artists.

Way in the back, past the fan groups, there was a laser tag arena and a roller derby course (marked on the floor in tape. The derby replaced the wrestling ring they had the first couple of years. For some reason Chevrolet was plugging the Volt (so to speak) in one corner. The roller derby makes sense in the same way as the wrestling does (garish costumes, code names, and violence), but I couldn’t figure out the Volt.

I’ve found that I quite like the Long Beach Convention Center. The location is fantastic, with a park on one side, the marina just across the street one way, and a mall with restaurants across the street the other way. It’s got nothing on San Diego’s Gaslamp Quarter, but if you want to get out for a bit in the middle of the day, it’s more pleasant than Anaheim. This year the con was able to get meeting rooms just off the lobby instead of all the way at the other end. A few years back, you had to go out the lobby, downstairs, and around the block to get to the events.

The only problem is that T-Mobile still has no cellular signal downstairs on the main floor. I’d decided to post photos to Instagram throughout the day, and I could only send them out from the lobby. 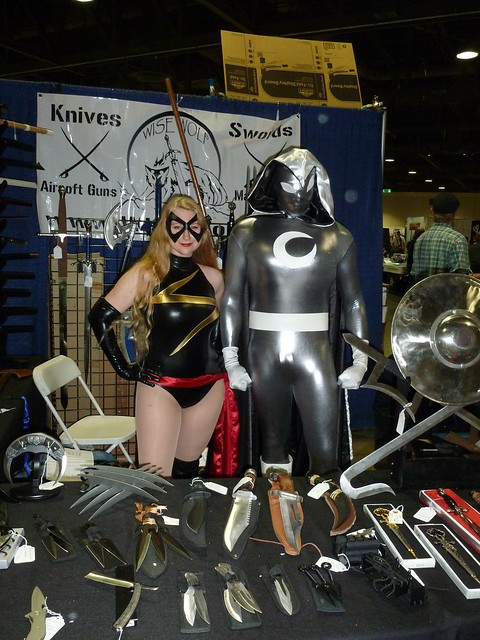 One of the first things I noticed was a heavy Star Wars presence. This was only a few days after the Disney/Lucas deal was announced, so I doubt it had a huge impact except on last minute decisions. More important, I think, was the presence of multiple fan guilds like the 501st, Mandalorians, and at least one more whose name escapes me. 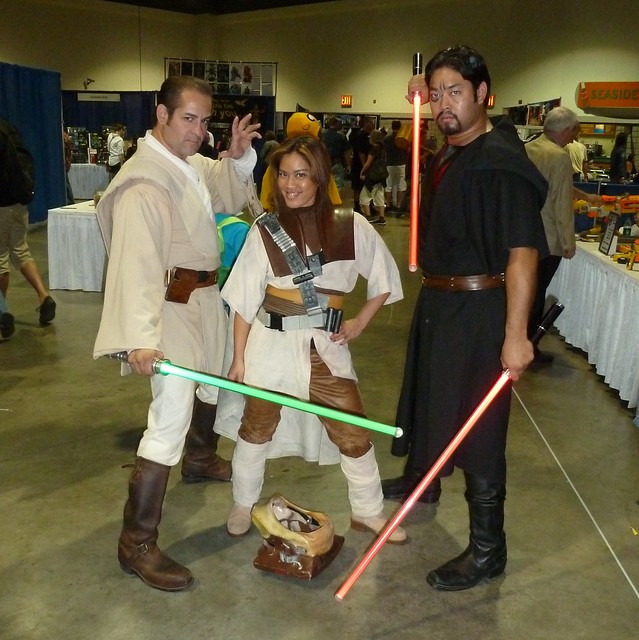 Most of the mid-tier comic book publishers (the ones based in southern California, anyway) had booths or panels, as usual – Boom, Top Cow, Aspen, etc. DC seems to have walked away entirely after helping with a big push the first year, and Marvel never got involved with this con from what I can recall. It’s still a bigger industry presence than the last Wizard con I attended, and of course a lot of artists and writers who work (or have worked) for the big two had tables in Artist’s Alley or did signings at one of the smaller publisher’s booths. 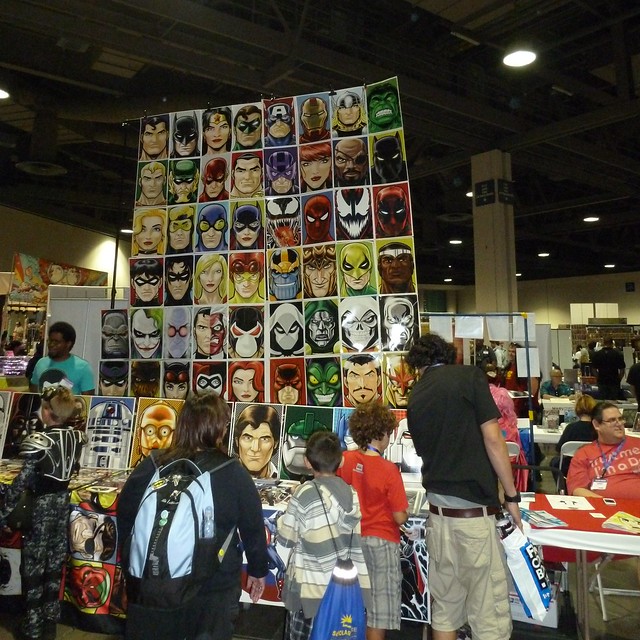 I picked up a handful of books: Once Upon a Time Machine, a collection of fairy tales and legends re-imagined as science fiction stories; the first volume of Tales of Supernatural Law; the JLA installment of the Hero Initiative’s 100 cover project; and the second volume (because they were out of the first) of The Adventures of the 19xx. It’s art deco airship adventure–I had to at least look! I was seriously tempted to pick up a majorly-discounted Absolute Sandman volume, but I’ve committed myself to only buying one a year for now, and I decided to prioritize comics I haven’t read over comics I have, even if they have been remastered. 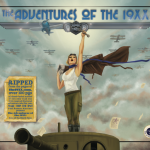 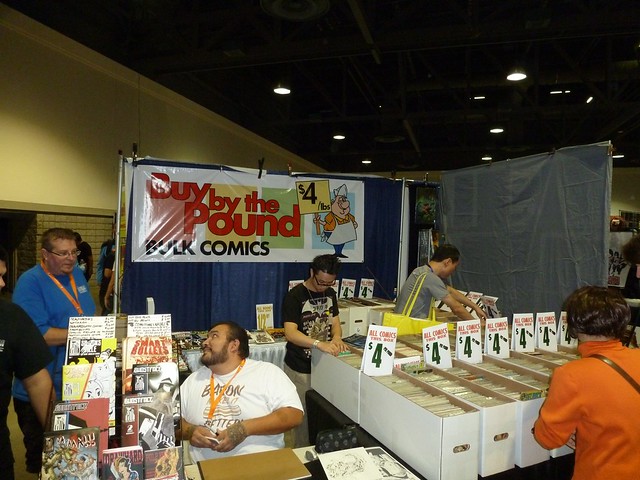 Speaking of the 19xx, while I was talking with author Paul Roman Martinez, he told me about the shoot for the comic-con episode of Castle. Apparently he was one of a handful of comic artists who appeared in the background, and after the first day of the shoot, he drew up a boxing poster featuring Frakes vs. Fillion and brought in prints the next day. The episode aired the following Monday. 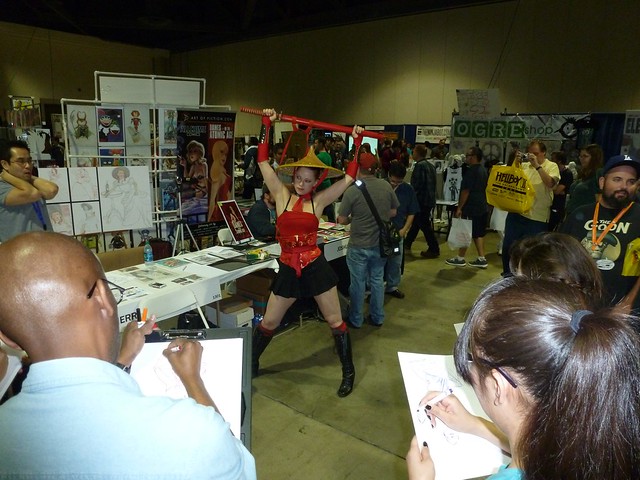 I also made a point of stopping to talk with Flash co-writer Brian Buccellato and pick up the latest issue of Foster. He showed me his pre-release copy of Flash: Move Forward — the first hardcover with his name on the spine. He was also very happy that they were willing to mention his self-published book in the About the Author bio. 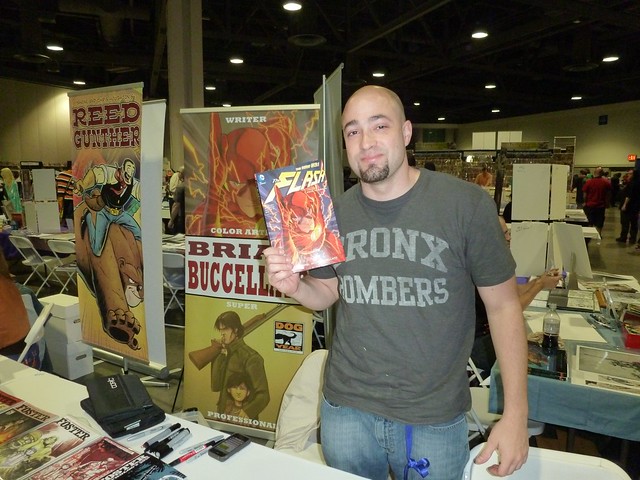 Another group that stands out was a board game in development called “We Are Dead: Zombie Mall Massacre,” in which players take on the roles of zombies trying to take over a shopping mall. It’s very much the comedic take on the living dead like you find in, say, Plants vs. Zombies. 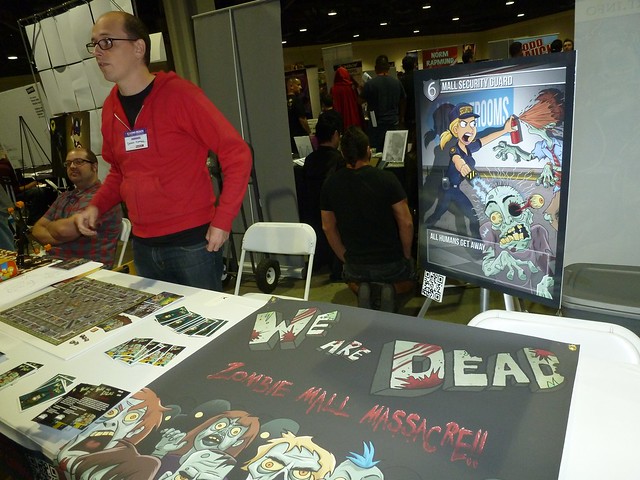 There was also a great collection of LEGO constructions by a local builder’s group. 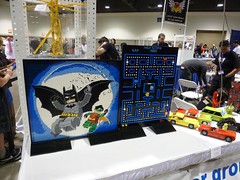 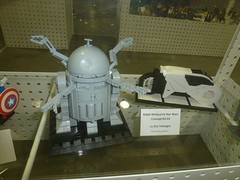 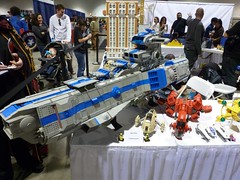 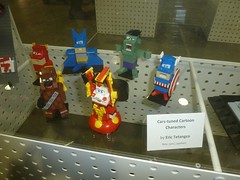 At one dealer’s booth I found a collection of toys from the 1980s, including the Star Wars action figures I remember having that included random rebel soldiers, guards from Bespin and Jabba’s sail barge, aliens from the Mos Eisley Cantina, and of course multiple versions of the main characters. I found myself thinking for the 254th time that week, “And people are worried that Disney is going to overcommercialize Star Wars???” 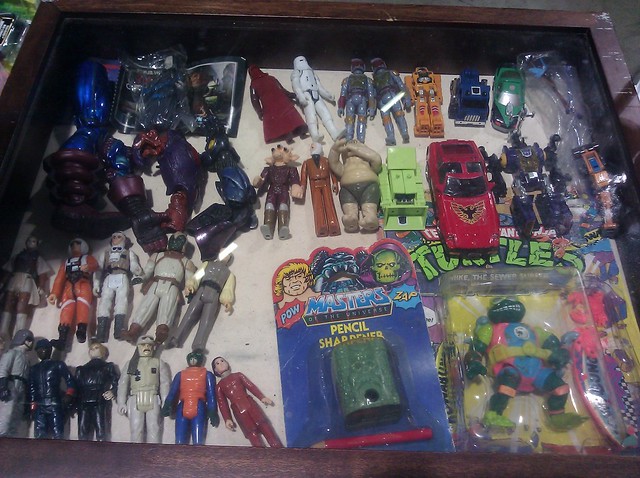 I mentioned the Star Wars presence. The universe has expanded so much that if the aesthetic is right, I frequently can’t tell whether a costume is an original creation or a character I don’t know. 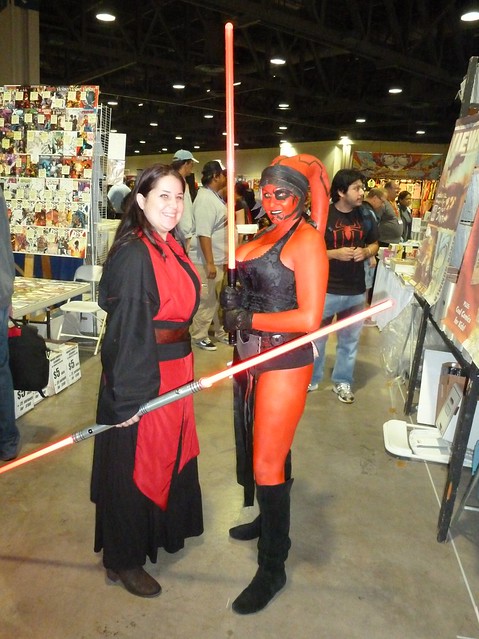 Not surprisingly there were quite a few Avengers costumes. I ran into at least two couples dressed as Black Widow and Hawkeye. 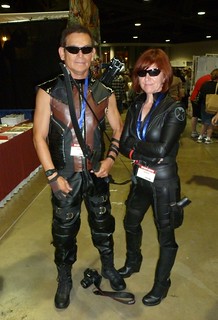 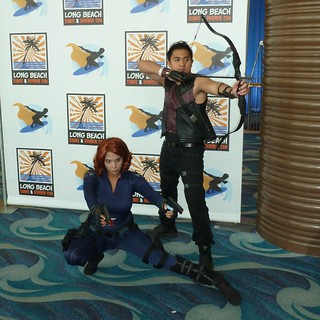 There was a very impressive Loki in Earth garb. He had the look, he had the attitude, and he stayed in character. At one point he caught everyone’s attention in the lounge between the lobby and food counter, and gave an extensive speech demanding all mortals present to attend the panel that would begin in five minutes. 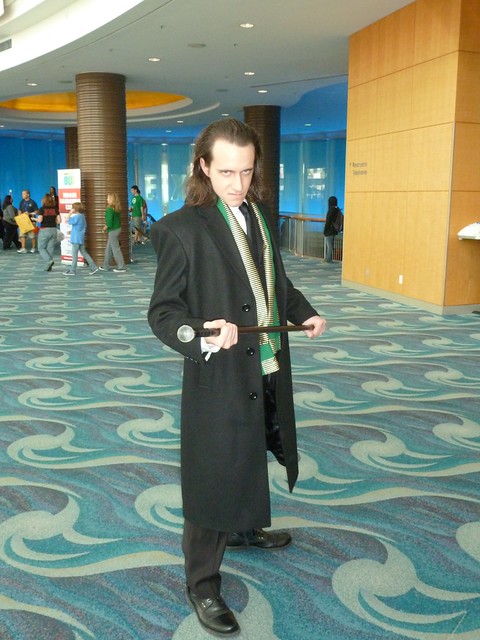 Then there was the time I reached for the restroom door only to have it pulled away just at the last moment, and I saw this guy towering over me. It reminded me of the “it’s just the Red Skull” moment in Bun Toons. 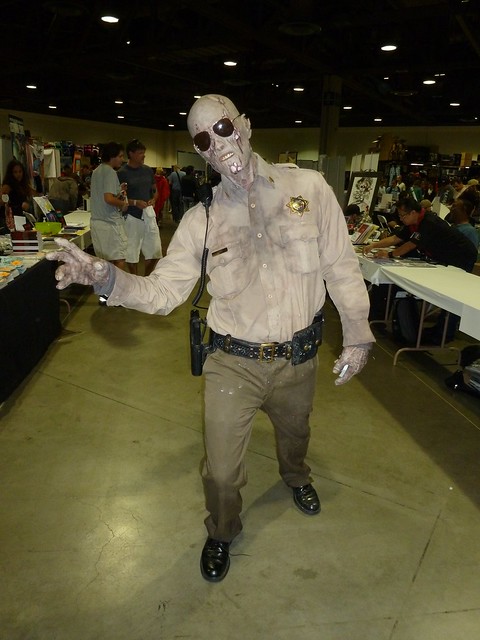 This was a really great Lady Mechanika and Lord Blackpool. 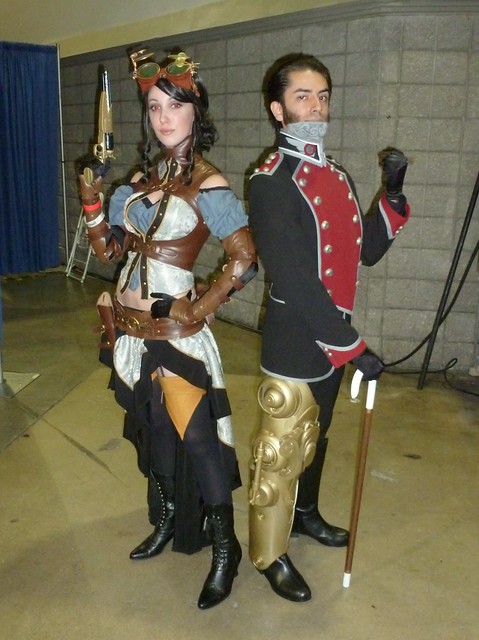 There were a few more horror-inspired costumes than at most comic cons, but a lot of them tended to be characters who have comic book connections, like Walking Dead and Ash from Evil Dead/Army of Darkness, or some stripe of zombies. 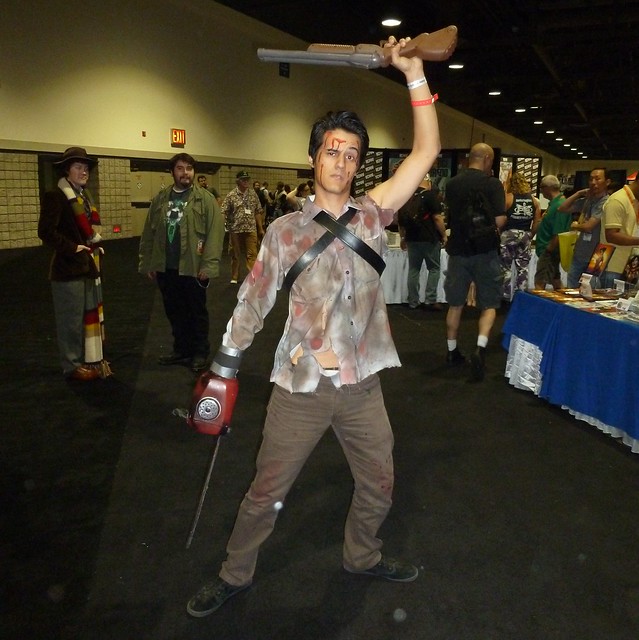 Better lighting and a few backdrops made the lobby a hub for cosplayers and photographers to find each other. I wandered back upstairs fairly often just to see who was there (and to send out any posts I’d tried to make).

Most of the aisles on the floor were wide enough (compared to the crowd) that the occasional pause wasn’t a problem, though there was a bit of a bottleneck right at the front of the hall, since the entry doors are in a corner. 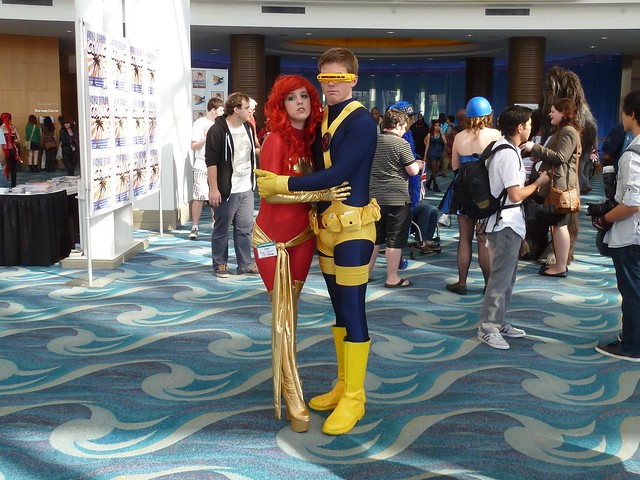 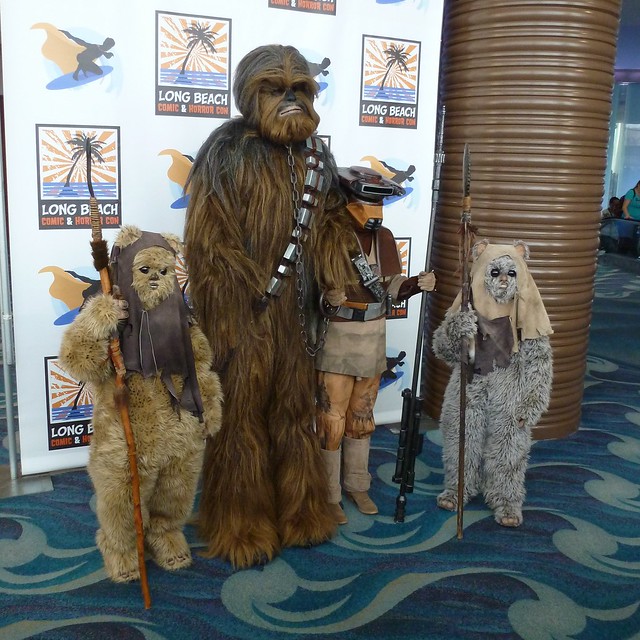 I was hoping to catch the costume parade at the beginning of the day, but arrived too late. On the plus side, it took no time at all to pick up my badge. I’m not sure how much of that is improved process over last year, and how much is just getting there after the rush.

I attended two panels: One in the morning was billed as how science fiction intersects with comics, though it turned out to be more about how comic books use and express various elements of narrative. It’s an interesting enough topic, but it’s not really what the title implied. The other was at the end of the day, a comedy hour put on by the people behind The Devastator. It was a mixed bag, kind of like the magazine itself, with one reading, some stand-up, and a sketch or two. (The one I remember is the Crypt Keeper’s new job as a career coach.)

One of these days I’ll go to a convention and actually stay for the masquerade. I remember going occasionally at Loscon, and I think I’ve been to one or two at Comic-Con International, but it always seems to turn into a choice between attending the masquerade or eating dinner that evening.

The convention ran from November 3-4, 2012. I attended November 3. Check out the rest of my photos from the event! 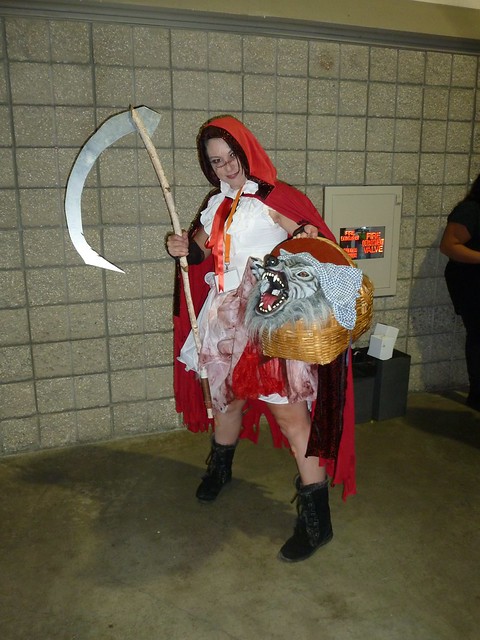