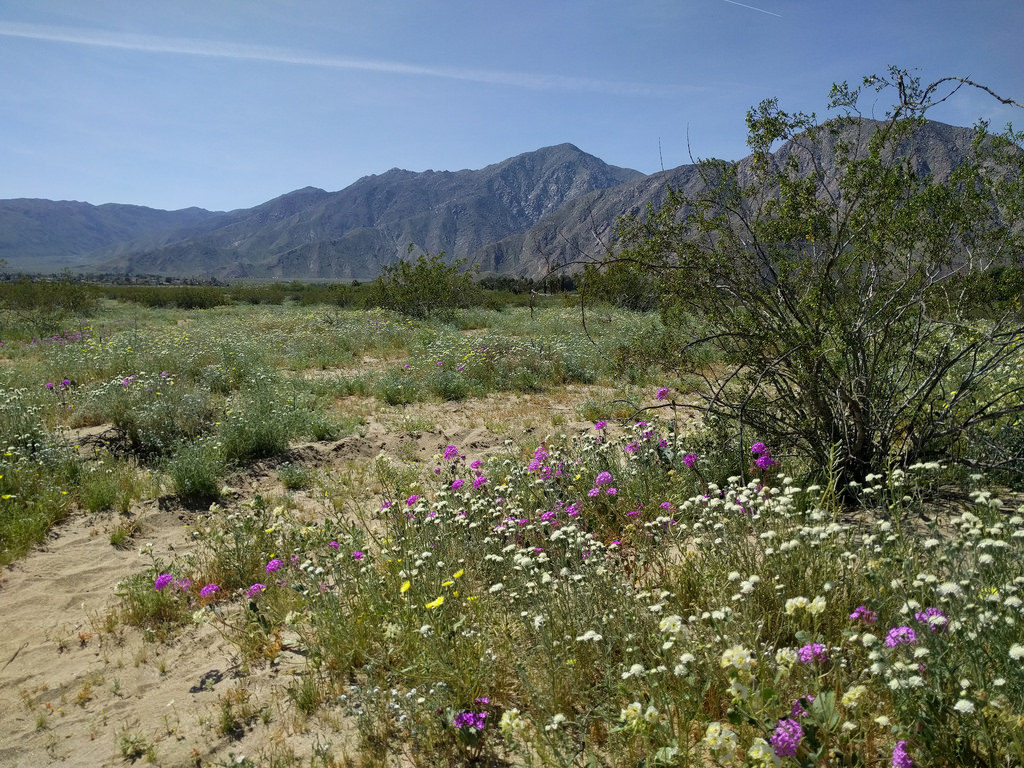 The kiddo had a day off from school in mid-March, so I took a vacation day and we all drove out to the desert to see the spring wildflowers. After the endless suburbia of Los Angeles, northern Orange County, and Corona, we drove past hills green from the winter rains, then into the similarly-endless suburbs of Temecula. It’s been years since I took Highway 79 south, and the city has grown a lot, but after a few miles the strip malls and housing developments disappeared, the road shrank to two lanes, and we drove through green hills with oaks, bushes, and the occasional patches of poppies, mustard and lupins. Fences, dirt roads and gates indicated ranches and wineries. 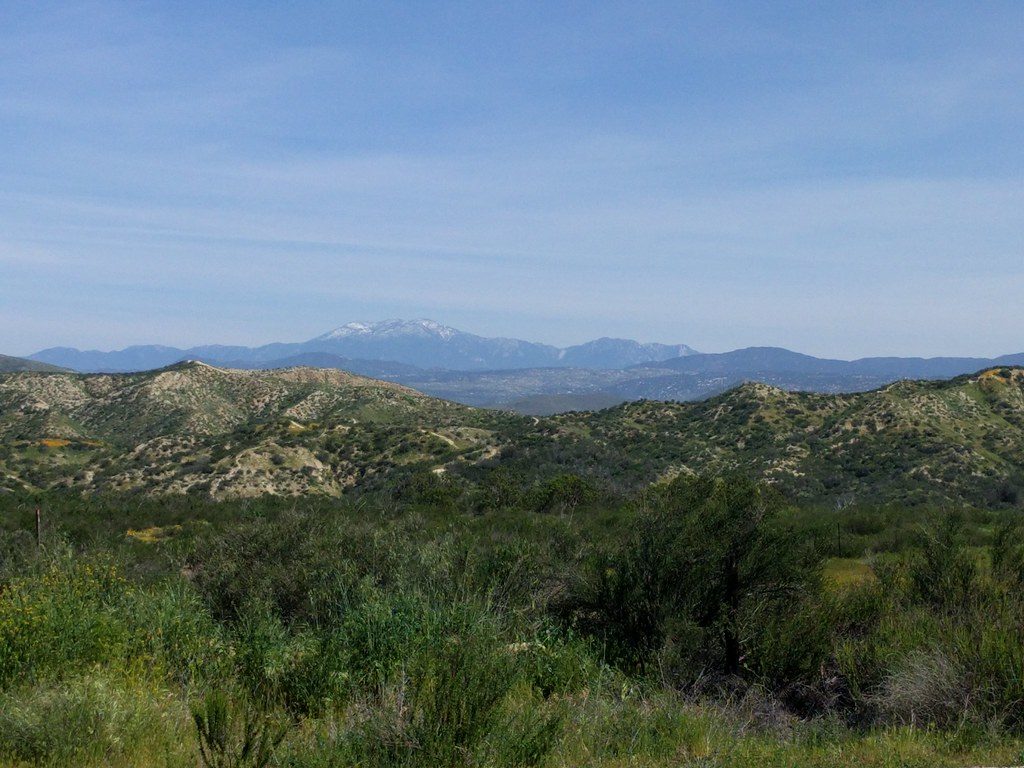 I kept thinking of all the times we’d gone out to Lost Valley scout camp when I was a teenager. The route looked a lot the same — even the diner with the giant ice cream cone sign — but it’s a lot greener in March than it usually is in summer or fall. As we passed Oak Grove, then the turnoff for Chihuahua Valley Road, and then Warner Springs, the landscape on one side of the valley gradually grew rockier and drier. Pastures gave way to rockier fields until we crossed over the mountains and looked out on the desert below. 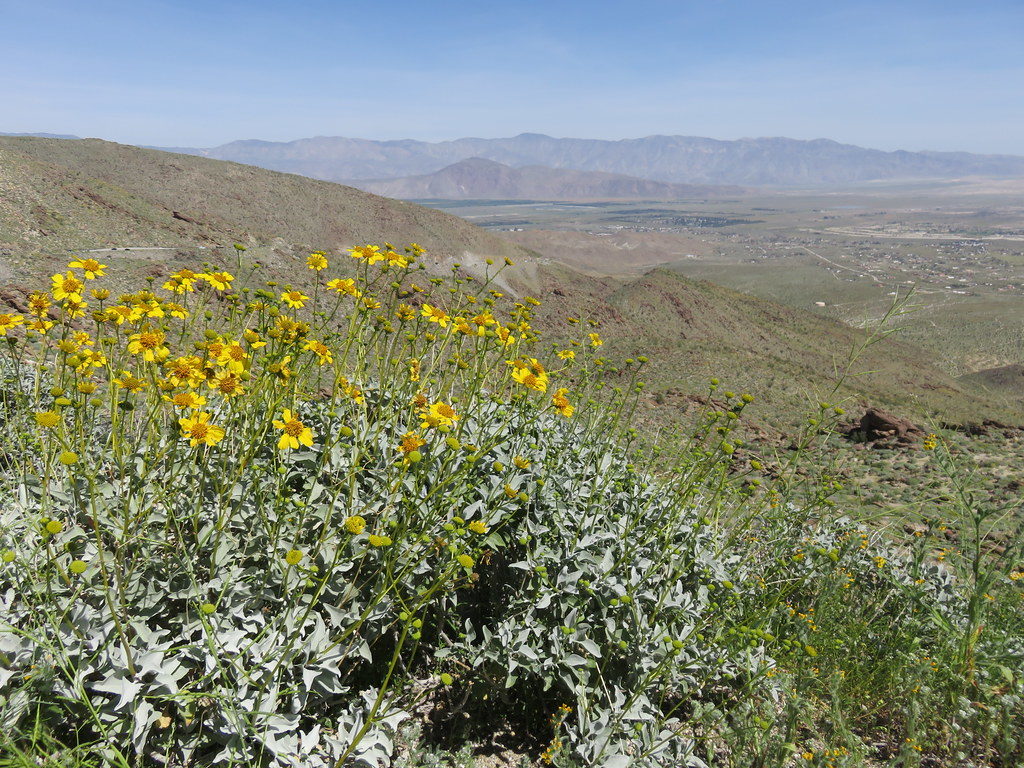 Even from the highway in the mountains we could see the orange of one of the largest desert sunflower fields in the distance. Sparse grass clung to the sides of the mountains, just enough to give them a slight greenish tint. We started seeing patches of wildflowers along the side of the road long before we reached the flatlands below.

The visitor center was swamped, even on a weekday, and signs sent us out to a local shopping center where park rangers were running an information booth. We bought a map, got some recommendations for routes to take and where to eat our picnic lunch, other sights to watch for, and a route out of town that would bypass traffic and give us a chance to see another, less traveled canyon. 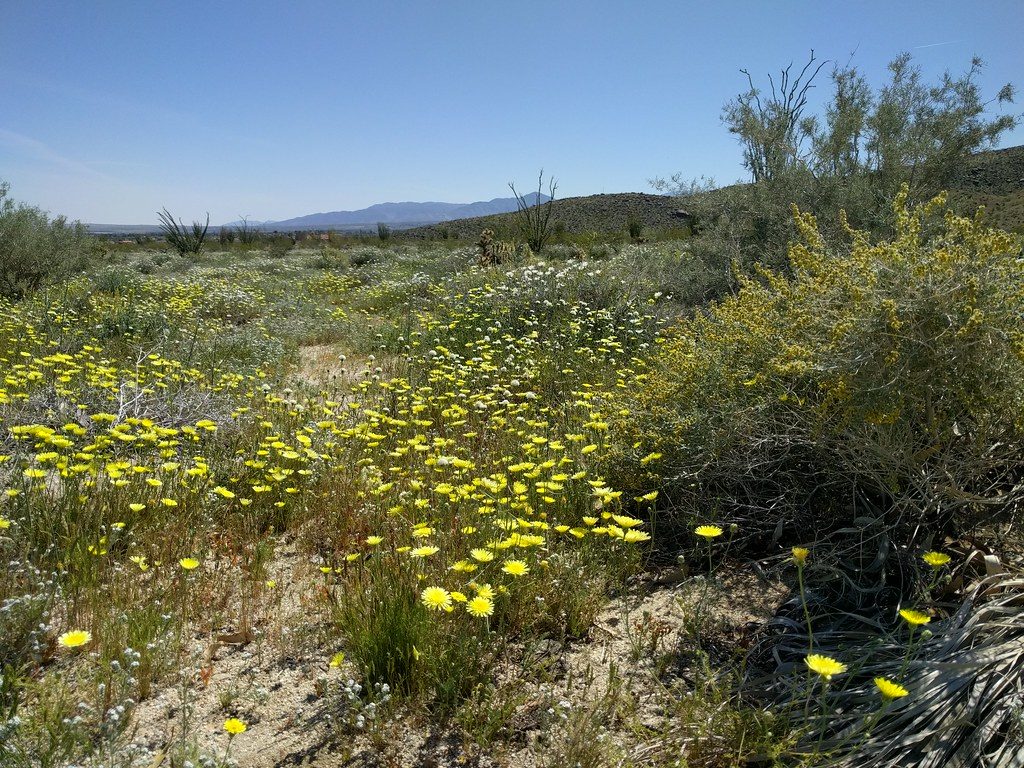 Along the way we stopped at several of the Galleta Meadows animal sculptures. There are dozens of large metal statues of elephants, camels, dinosaurs, prehistoric and imaginary creatures placed just off the road, where you can easily drive off into the dirt to look at them up close. The biggest is a sea serpent in multiple segments with its tail on one side of the road and its head on the other. We checked out a few of them and posed with the sea serpent before driving on. 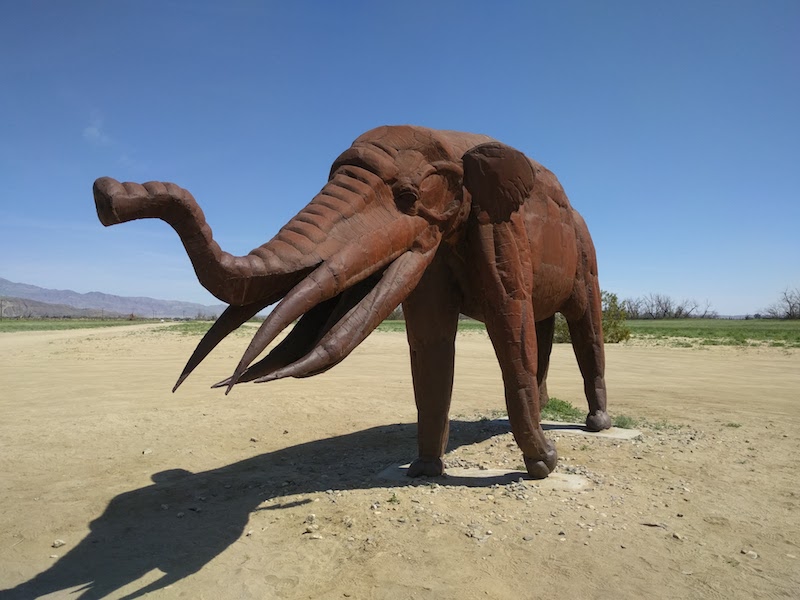 In the shade of a windbreak near an orange grove, we stopped for lunch. It was at least 90˚ and cloudless, so the shade was very nice! The pine windbreak had a few downed trees, and a lot of yellow needles making me wonder if some of the trees were sick. A few other cars were parked up and down the road, each with a group of people hanging out in the shade. Flies buzzed around, constantly landing on our food. After lunch we piled back into the car and drove on, past a palm tree farm and finally to the largest field of flowers I’ve ever seen. 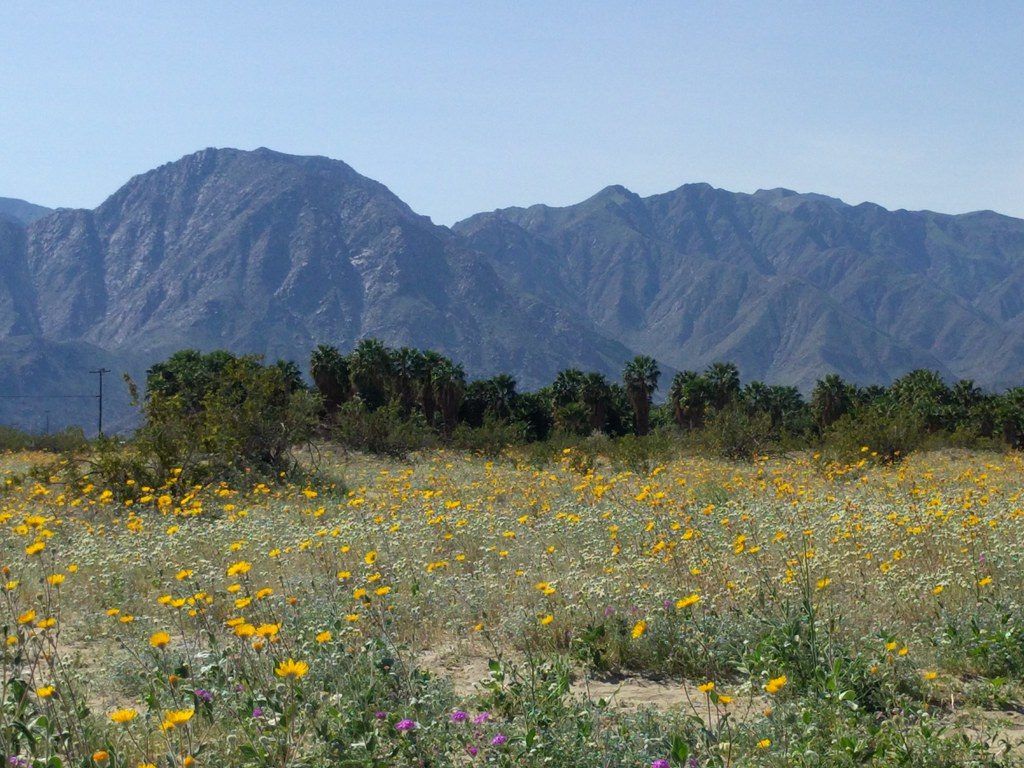 Most of the year, this would be open dirt with occasional scrub and cactus. Now, after one of the wettest winters in years, it’s covered with orange, white, yellow and purple flowers. We parked the car by the side of the road, climbed out, and went for a walk. 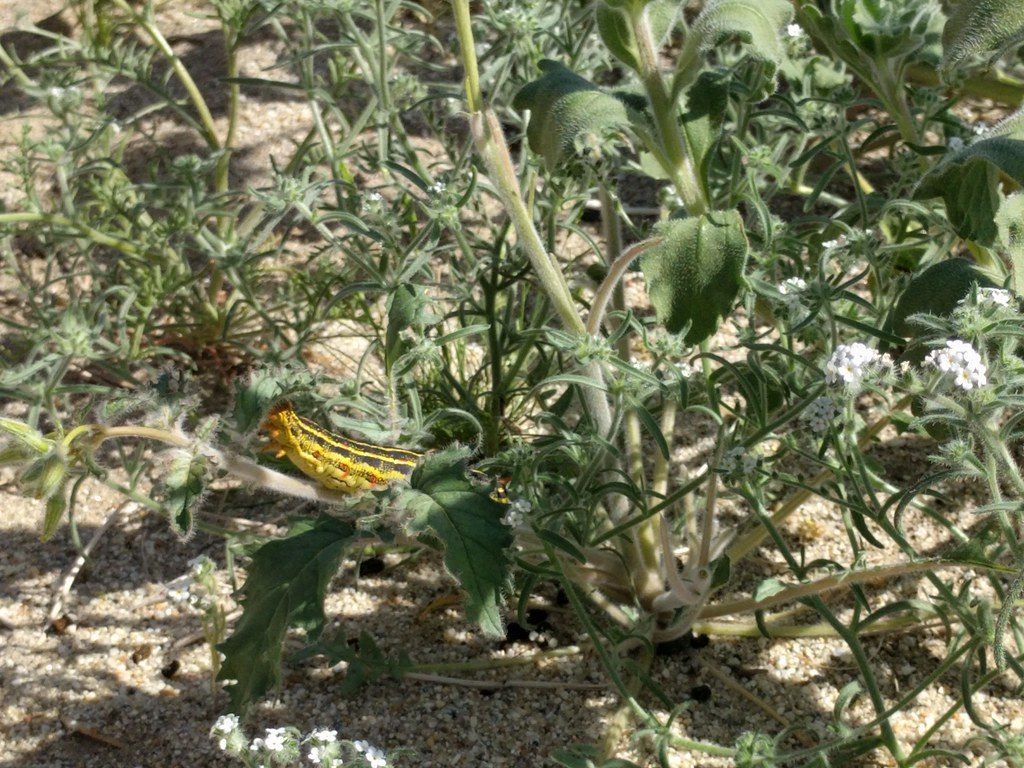 Several other families had stopped at the same spot by the side of the road. J. joined them as they looked at humongous caterpillars. 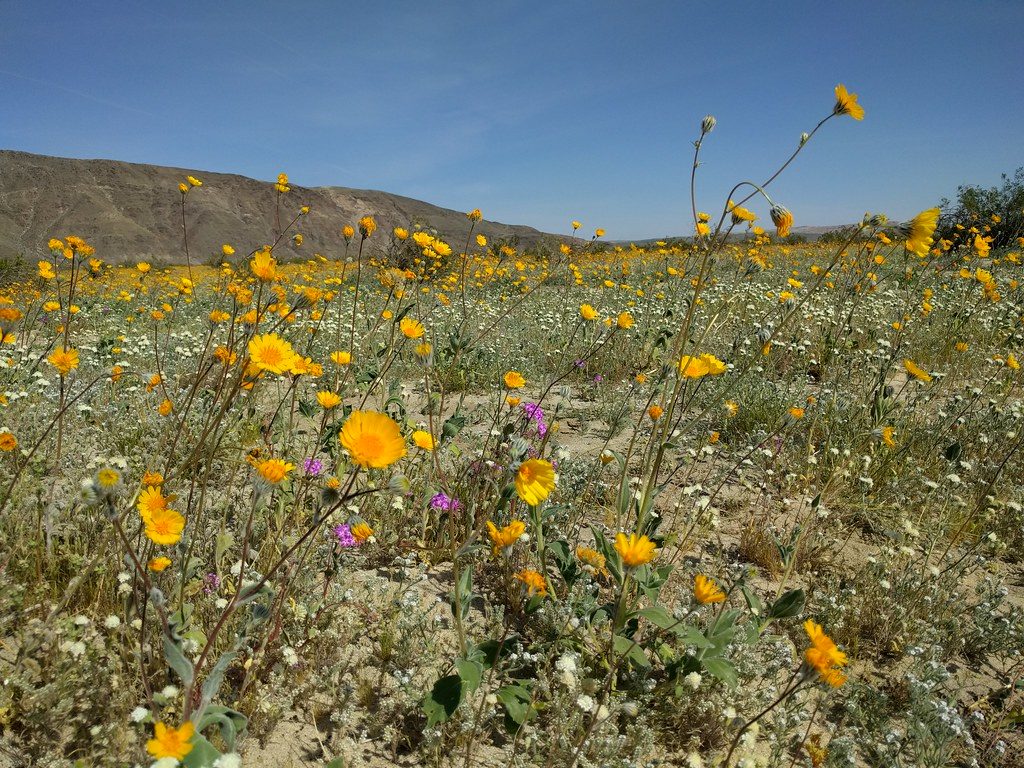 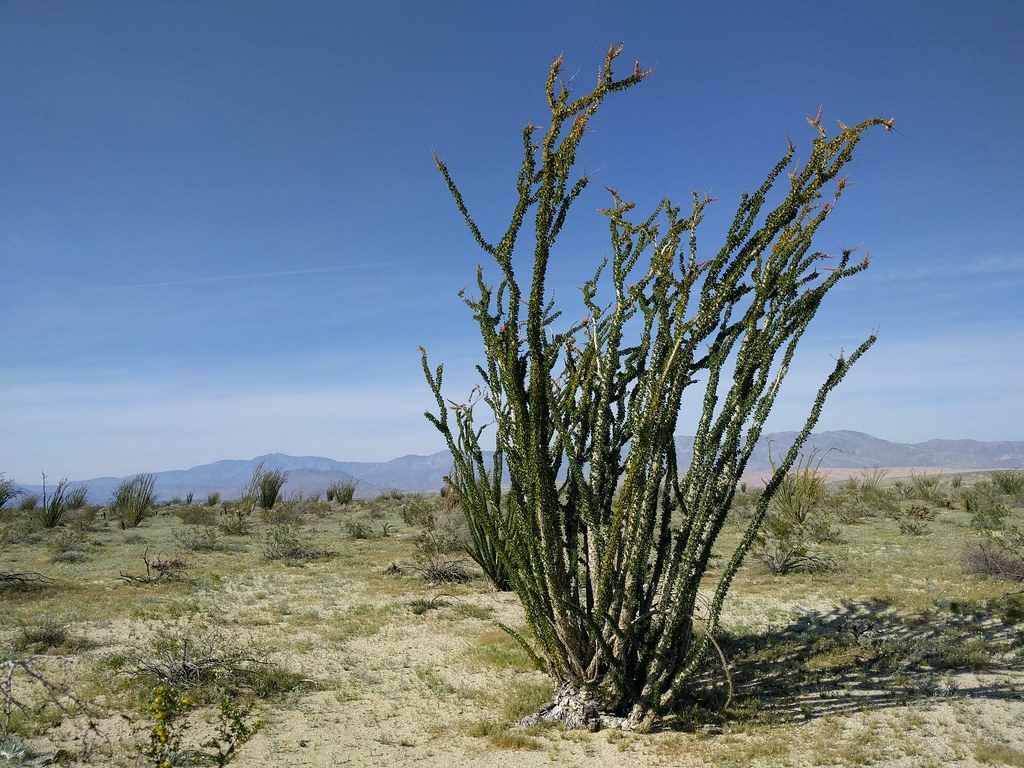 The ranger’s suggested route sent us in a circuit around town. We passed lots of open road, a dry lake, an airport, a solar panel farm, scattered houses, a “resort” that looked like a cluster of houses, stands of trees, and a burned-out area. Finally, we were back on the highway, heading up into the mountains by a different route. 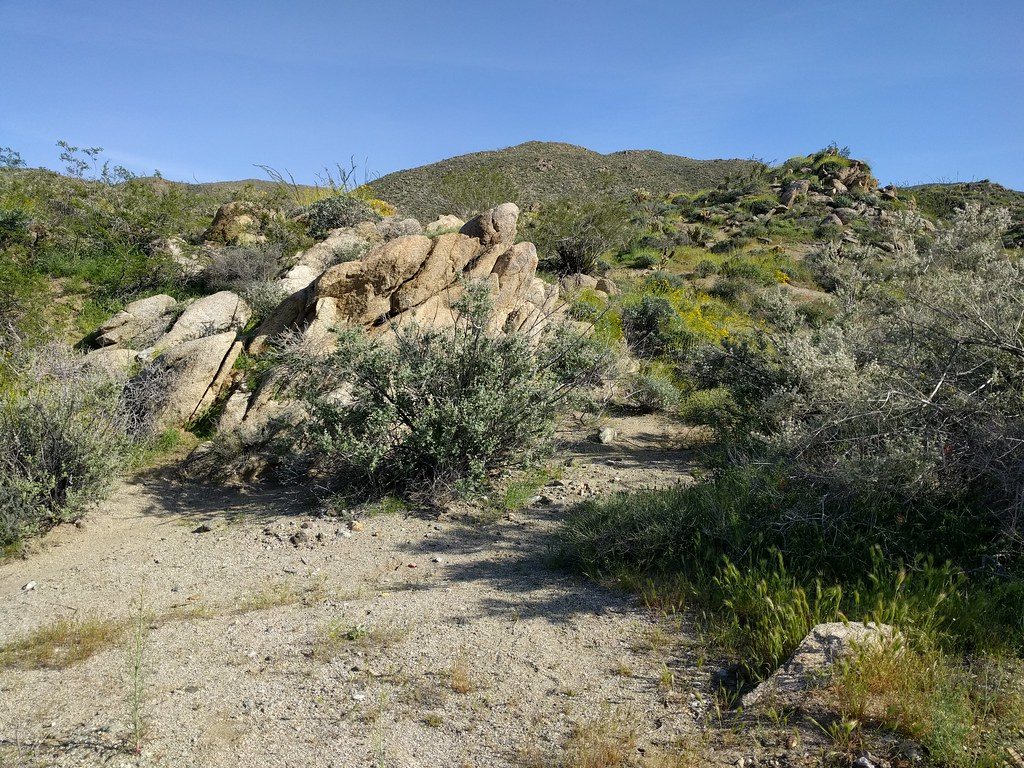 Before we left the desert, we took the dirt road up Plum Canyon (off of Highway 78). Yes, in a Prius. It’s a transitional zone, with desert and mountain plants mingling. There were cactus and bushes, not much grass yet but more scrubby-looking flowers than down in the flat desert. The flowers we saw were mostly white flowers on what were probably desert apricots (not actually apricots), some small blue and yellow and red flowers on low bushes…and these tiny pink flowers that grew sparsely in the shade, or between wheel ruts like in this photo. 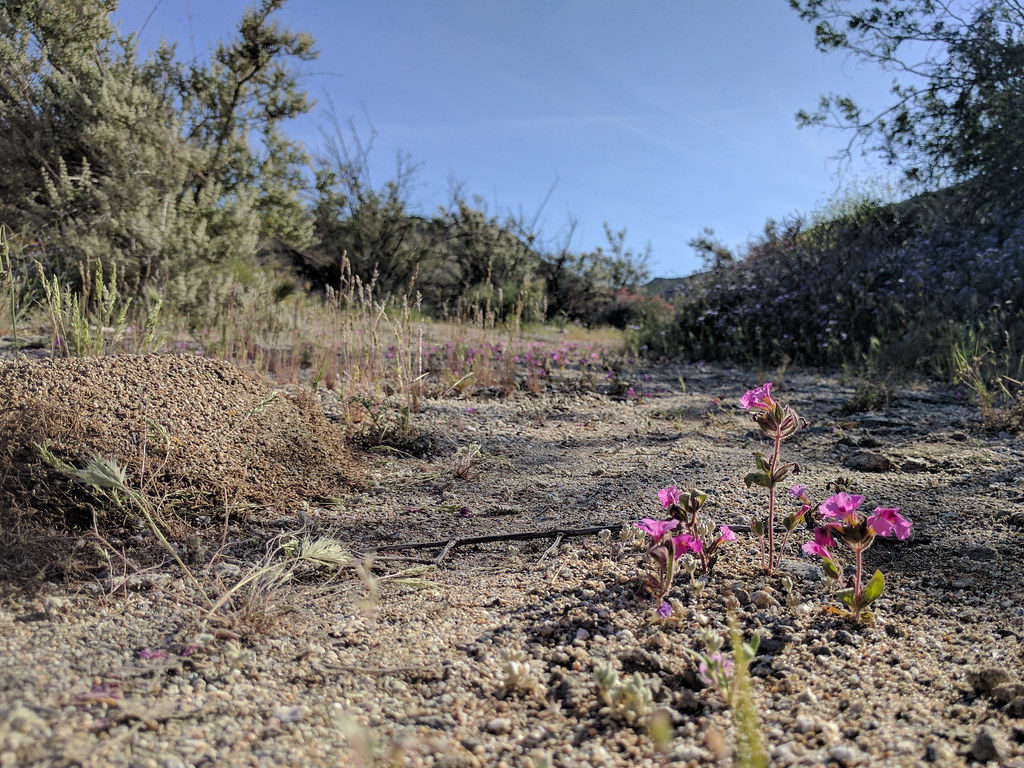 From there it was back into the mountains and greenery. We stopped for a break in Julian, where J. played video games and air hockey while Katie tried a flight of local meads. We kept going through to Escondido for dinner and dessert, then out to the coast and back home. It was after 11:00 when we got home. The next time we go out that way, we’re going to have to camp or stay somewhere nearby!