For all the griping and complaining about the way DC Comics managed the Flash relaunch, I’m beginning to think maybe Wonder Woman fared even worse. At least Flash has stayed monthly, and has never been delayed by more than a week (unless you count the shipping mishap in December that prevented the book from reaching the west coast). 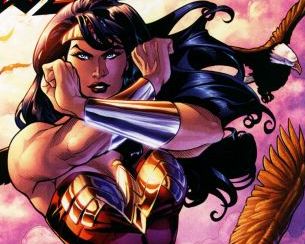 Wonder Woman launched with a 5-part story, “Who is Wonder Woman?” involving both Diana, Amazon Princess of Themyscira and Donna Troy. Flash launched with a 6-part story, “Lightning in a Bottle,” setting up Bart Allen to take over as the Flash. Flash is already up to #8. Wonder Woman has gone bimonthly, and is only up to #4. And it’s so far behind, DC has scheduled a fill-in story for #5. The conclusion “will be rescheduled at a future date.” Naturally, the book collecting the story has been delayed as well.

So here we are, nearly a year out from One Year Later, and one of DC’s flagship characters is still mucking about with a semi-origin story. It’s kind of sad, because I picked up #1 out of curiosity, and thought they did an admirable job of simplifying Donna Troy’s backstory for new readers. It’s complicated—but it doesn’t have to be, if you can focus on just what’s necessary.

On the plus side, Wonder Woman fans knew where Diana was by the end of issue #1, unlike us Flash fans who had to wait until #6 to get a hint of Wally West’s fate, and it’s been clear from Justice League of America and other books, that Diana would be coming back, so they probably haven’t had to deal with the great schism that’s divided Flash fans over the past year.

2 thoughts on “I Wonder where that Woman is?”