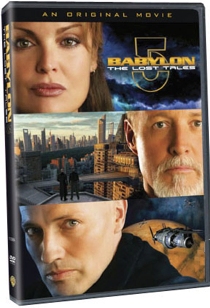 Last night we watched Babylon 5: The Lost Tales volume 1, Voices in the Dark. The direct-to-DVD movie is the first new Babylon 5 since the Legend of the Rangers TV movie/pilot 5 years ago, and the first to focus on characters from the original series since A Call to Arms set up Crusade back in 1999.

The movie has two distinct segments, the first focusing on Lochley, now a Colonel and still in charge of the space station, and the second focusing on Sheridan and the techno-mage Galen. Both segments take place during 2271, placing it 9 years after the main story, during what would have been the 5th season of Crusade if the series had lasted.

The result is mixed. The first segment is the weaker of the two, owing in part to the fact that it’s essentially a bottle episode, taking place entirely on the station. Visually it’s very static, with characters mostly standing in one place and talking. This is probably influenced by the virtual sets, and the fact that J. Michael Straczynski directed the movie himself.*

The second segment is much stronger, and feels like a real return to Babylon 5. It helps that Sheridan and Galen play very well off each other. Their scenes together are the highlight of the film, and even though this segment still has its share of two actors in a room talking, it somehow feels more dynamic.

The special effects, of course, were incredible. Babylon 5 pioneered the use of computer-generated effects for television, and being pioneers, the show looks primitive by today’s standards. The technology has advanced immensely in the past decade, and the movie looks like a modern 21st-century skyscraper compared to the original show’s log cabin. More importantly, they’ve managed to make it look better without making it look like another show.

The virtual sets took a little getting used to. They’re better than they were 10 years ago, but still not quite up to the real thing. Plus they have their own challenges for acting, as the actors explained last Friday during the B5: Lost Tales panel at Comic-Con:

Tracy Scoggins: In my tiny corner it was like a little doll house with slippery chairs. I walk out and there is this cavernous green screen and I turned to Joe and asked “where is the door?”

Peter Woodward: With green screen, when you are 360 degree green screen, the cameras stay where they are, and we move. Now that may not seem like a problem, but I get used to that visual image … my background keeps changing. Until you get used to it, it can be very difficult.

The Lost Tales was originally announced as a series of direct-to-DVD releases. JMS explained that the reason he directed this one himself was that he wanted to establish the tone and look for future installments. True to form, Warner Bros. decided to start with just one to test the waters. By the time they went into production, JMS had cut a third segment focusing on Garibaldi, in order to put more time (and more of their limited budget) into the other two segments.

If they do make more, they’ll bring in real directors. And with any luck, WB will be willing to give them the budget for a few more physical sets, and a few more actors. (I counted 3 leads, 4 supporting characters, a couple of extras and some voice-overs. We did shows in high school with more actors on stage.)

This film didn’t wow me as much as I’d hoped it would, but it shows enough promise that I’d happily pick up a second one.

The Lurker’s Guide to Babylon 5.

*JMS is a great writer, but this is only his second time directing, ever. He did a surprisingly good job the first time, with the series finale, “Sleeping in Light.” Of course, he’d had that story in his head for the previous 10-15 years, and had come off of 4 years of production on the actual show.

2 thoughts on “Review: Babylon 5: The Lost Tales (No Spoilers)”