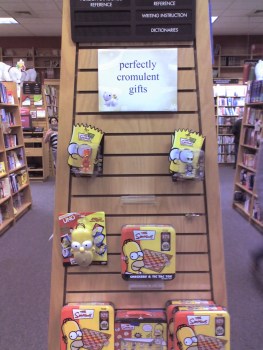 Catching up here on some stuff I saw in stores last December during (and after) Christmas shopping.

The “perfectly cromulent gifts” is my favorite of the bunch. The Simpsons display was found at a Borders bookstore, probably the one at The Block at Orange. 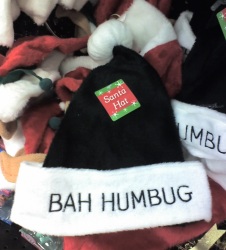 I love the fact that the “Bah Humbug” hat is actually labeled as a “Santa Hat.” I think someone’s got their wires crossed. Found in the clearance aisle at the grocery store. 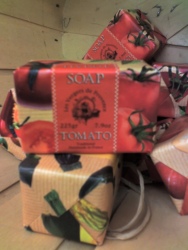 These bars of tomato soap (not a typo!) were at the World Market at The Village (the one that used to be Orange Mall, not the apartments across from the Spectrum — though I think they use the same font for their logos, which is kind of strange. Better than the apartments that use nearly the same font as the logo for The Prisoner, though!) 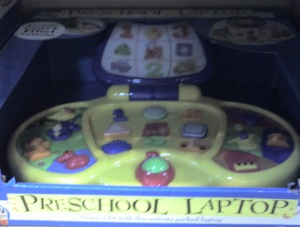 I think the reason I get such a kick out of this toy is that laptop computers didn’t exist when I was in preschool (or if they did, they certainly weren’t affordable to anyone who didn’t absolutely need one for business). A laptop meant the top of someone’s lap. And now, in the grand tradition of transforming the everyday objects of the adult world into toys for infants (cars, telephones, bubble pipes), we now have something that vaguely looks like a folding keyboard and screen.