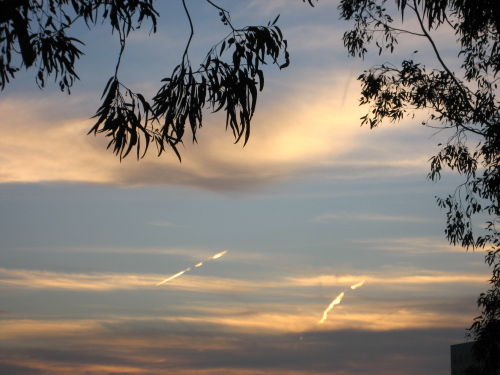 I had to get up early today, early enough that I could still see a couple of stars (or more likely planets, but I’ve lost track of where most of them are right now). When I got to work, I was treated to the sight of these contrails lit up against the morning sky. The rising sun was still behind the mountains, below the frame.

Look at the cloud directly above the contrail on the right, near the leaves. You’ll see a dark nearly-vertical line, which I initially took for a contrail’s shadow, possibly even the one below it. A minute or so later, though, it looked like it might have actually been another contrail, one not lit up by the sun and therefore darker than the cloud behind it.

Oddly enough, half an hour later the entire area was blanketed in fog.

One thought on “Contrail Contrast”