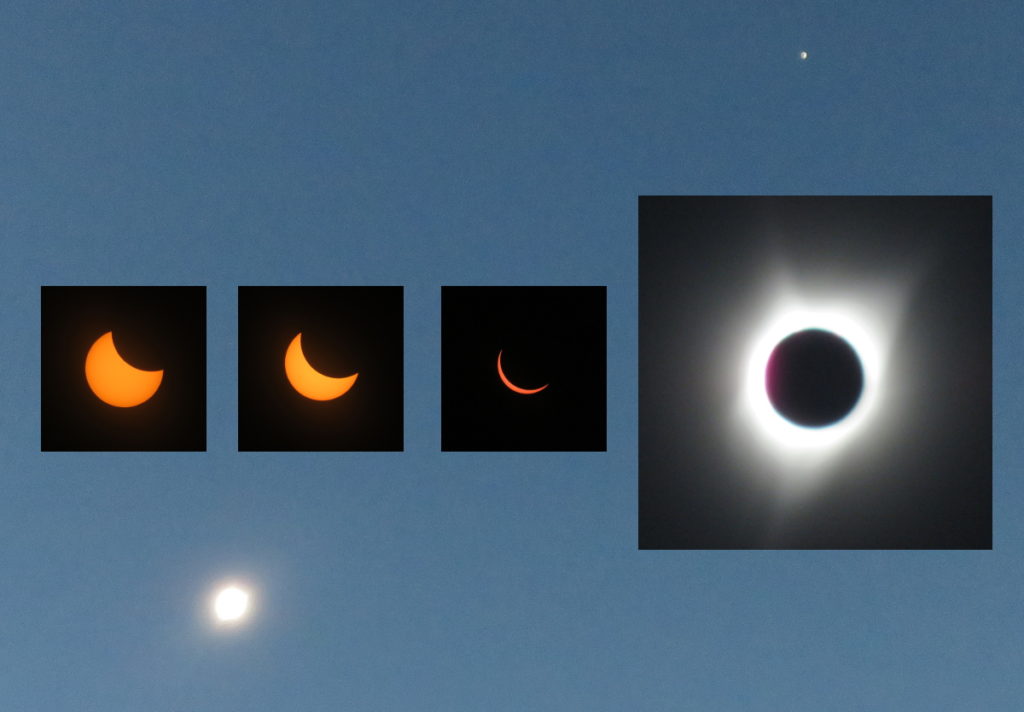 I’ve always wanted to see a total solar eclipse, but until now I never had the opportunity. I’ve caught a number of partial solar eclipses over the years, and quite a few lunar eclipses. This year’s “Great American Eclipse” was perfect: it passed close to Portland, where we have family, and we could visit friends on the way up.

By the time I reserved our hotel there was nothing left inside the path of totality, but we could still get an expensive room in Portland. I reserved that immediately for the nights before and after, then a motel for a few nights before so we would have time to visit, then we planned out the trip up and back.

Driving Into the Path

The morning of August 21, we got up at 5:30 to drive south into the path of the eclipse. We didn’t actually make it out the door until at least 6:30, and the parking attendant had lost our key (fortunately we had two, and they did eventually find it that afternoon), and then we got lost trying to find an ATM in case we had to pay a ton to park in someone’s field (one way streets and bridges and driving into the early morning sun), but we got on the road toward Salem by around 7:15/7:30, with our eclipse glasses, water, snacks/emergency food, and a very sleepy 6½ year old.

The threatened traffic jam carpocalypse didn’t materialize. There were slowdowns, sure, but nothing we hadn’t experienced on the way out of LA. Our nav system (which J. calls the “map lady”) sent us onto a side road at one point, and we drove through the countryside a while before getting back onto the interstate.

After a while, that sleepy kid started clamoring for a coffee cake (Katie had quoted “Code Monkey” earlier, and the idea wouldn’t get out of his head). So we figured we’d wait until we were solidly in the path of totality, hit a coffee place, grab the snack, take a restroom break, and depending on parking maybe just stop there.

The outlet mall in Woodburn was hosting an eclipse party. $20 to park, much less than what we’d feared. And we were there around 8:30, well before the partial phase of the eclipse began!

People were setting up all over the mall and the parking lot, which had a nice clear view to the east. Past the lot was a frontage road, then the freeway, then trees, and above the trees was the midmorning sun. The weather was still comfortable, though it would turn hot later in the day. We didn’t even have much in the way of wildfire smoke to deal with. 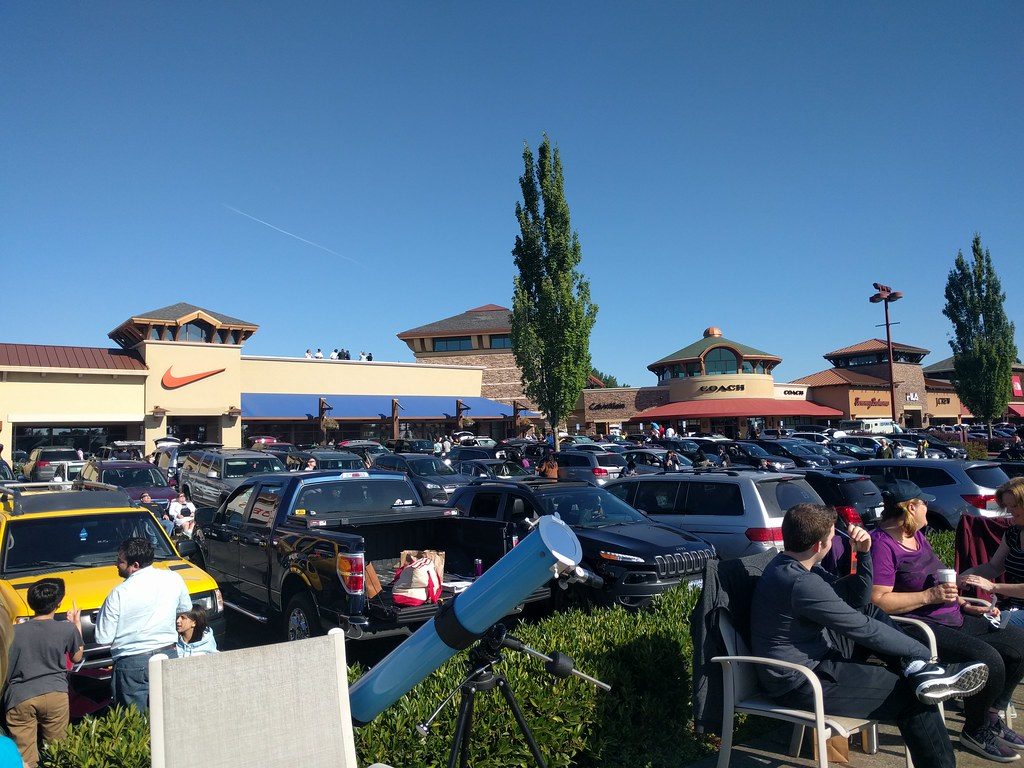 Some people had telescopes, some had fancy cameras on tripods, most had cell phones and eclipse glasses. (We’d noticed someone selling eclipse glasses out of the back of a car outside the grocery store a few days earlier.) Some had brought folding chairs, but most just stood. The partial phase is long enough to mill around, and the total phase is short enough to stand.

And people were from all over. We talked to a couple of kids from British Columbia, whose family had traveled about as far as ours. The crowd was also a lot more diverse than we’d been seeing over the last few days (Oregon and Northern California are very white, rural areas even moreso), much more like the mix of people we’re used to at home. 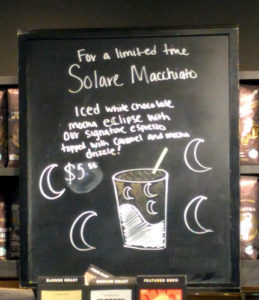 The partial eclipse started while Katie was in line for Starbucks (which had a special Solar Macchiato drink for the occasion). A very long line. We asked J. if he really needed the coffee cake now, or if he could wait. He agreed he could wait, so we left the line and started checking in on the eclipse with the glasses every few minutes. After a while, the kiddo got too nervous to look, and would only look at the pictures I took through the glasses. But when we found someone with a filtered telescope, he did look through it! 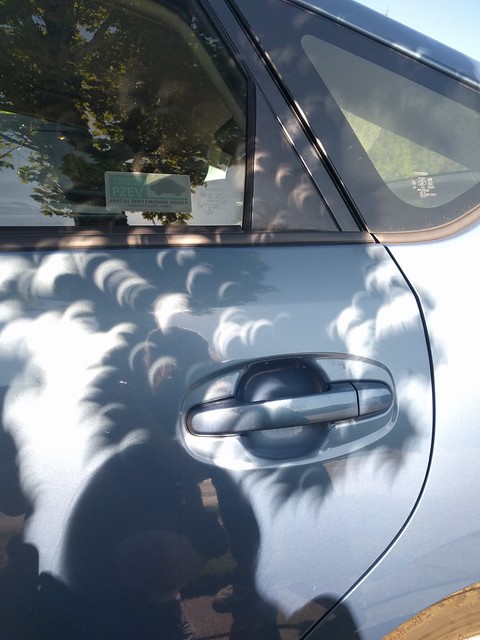 We saw natural pinhole projections from leaves – all over the place, once we knew where to look, including on our car when I took him back to grab a snack (making sure we had enough time to get back before totality started). The telescope I mentioned. A set of binoculars set up as a projector. And our own views through the filtered eclipse glasses. 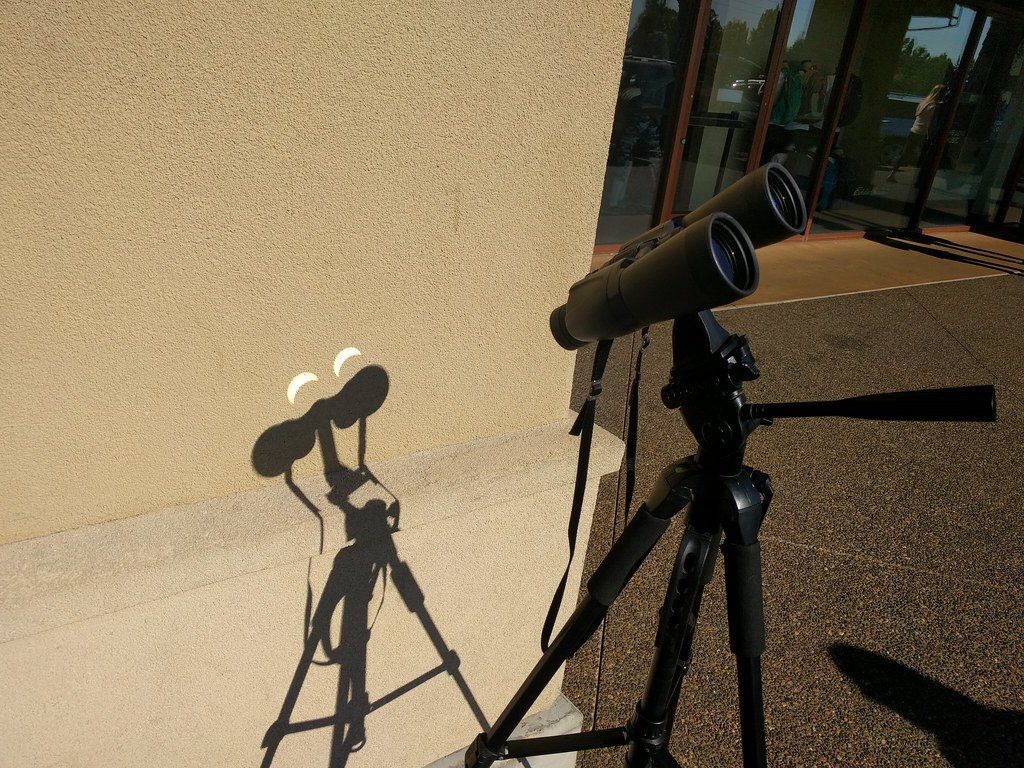 The light got noticeably dimmer in the last 15 minutes or so before totality. Not yellowish or red like late afternoon or wildfire smoke (which fortunately didn’t block our view), but normal mid morning light, just dim. Oddly, the remaining sliver visible through the glasses seemed to get brighter each time we checked. Probably a result of our eyes adjusting to the light level. 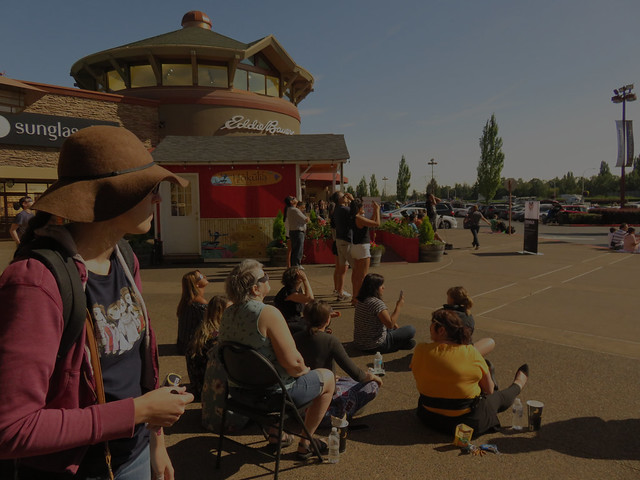 I watched through the glasses as the last sliver disappeared, everyone got quiet, and then everyone got louder. I removed them to see the sky turned dark, the corona streaming out from a black circle where the sun had been, and a bright planet (Venus?) near the zenith.

I never expected the corona to be so bright! Katie wasn’t sure it was safe to look yet, at first! It’s different from what I expected – the sky is dark blue, not like full night, but like twilight. It’s still bright near the horizon, again like the sky after sunset. The disk of the sun looks black, like there’s a hole in the sky. And the corona streaming around the sun is bright enough that it can still drown out the empty spot in wide angle photos.

After what hardly seemed like any time at all, someone shouted “here it comes!” I lifted my glasses. A bright spot appeared on the upper right edge of the disk, and the light came flooding back. I said, “I thought it was supposed to be over a minute!” And someone else replied, “It was!” I had this weird feeling of loss, realizing that the once in a lifetime experience was over already.

As the light returned, the crowd cheered, then started to disperse. The second partial phase had only just started, but it was the same thing we’d seen earlier, in reverse.

We went back to Starbucks, which had closed at 10:00 so that the employees could experience the total eclipse. They reopened with a much shorter line, and the kiddo got his coffee cake.

The promised (threatened?) traffic jam hit on the way out. Google offered a detour, sending us through Hubbard to 99E…along with everyone else. I think we spent 30 minutes on one 2-mile stretch of road. We stopped for lunch in Wilsonville around 1:30, got back on the freeway around 2:30, and finally made it back to our hotel around 3:30.