Just yesterday, I had no idea there was going to be a lunar eclipse this morning. Then I skimmed an article somewhere and got the impression it was only going to be visible on the east coast, And then I read about it on Bad Astronomy and realized I had it backward. Not only would I be able to see part of the eclipse, but I’d be able to see the moon in totality! All I had to do was get up early in the morning and find a place with a clear view of the western horizon. I considered driving down to the beach at 5am, but thought I’d start out by seeing how visible it was from home. As it turns out, I should have gone to the beach to start with, but I had some good viewing before I left.

So I set my alarm, woke up at 5am (plus the snooze button), and went out to see what I could see. To my surprise, I actually had a decent view of the partially-eclipsed moon from across the street. It was about half-covered at this point (as shown in the first photo above). So I stayed out there for a few minutes deciding what I wanted to do, went back in to have some coffee and breakfast, then went back out shortly before 6 to watch as the umbra covered the disc the rest of the way. I found it interesting that it didn’t look particularly reddish this time, just brown.

Awesome viewing, though it was clear the moon would dip below the roofs of the houses soon. I needed a less obstructed view.

As soon as the moon went into totality, I went back inside, woke up Katie just enough to let her know I was going, tossed the rest of my coffee in a travel mug and hightailed it down to the beach.

The eastern sky was already light when the total phase of the eclipse began. As I drove, I crested a south-facing hill and saw the southeastern horizon lit up deep red, with silhouettes of Saddleback and the San Gorgonio mountains in the distance. (Keep reading – I’ll come back to this.) I came so close to stopping, but figured eclipses are only visible from here every few years. Sunrises happen every day. So I kept driving.

I went to an area of Redondo Beach or Torrance (I’m still not sure exactly where the city boundaries are) where a street runs along the top of a cliff, with occasional stairs leading down to the beach maybe 30 feet below. There’s parking along the street, and benches where you can watch the waves or the sunset…or this morning, where you could watch the eclipse. There were maybe a dozen or so people spread out along the cliff, several of them with tripods. Clearly I wasn’t the only eclipse hunter who had thought of this spot.

Unfortunately, I got there too late. By the time I parked the car, the sky was light enough and the moon was behind enough haze that it was virtually invisible. It would have been a great full moonset under ordinary circumstances, but the refracted earthlight just wasn’t enough to light it up against the dawn sky.

Everyone still there was packing up. 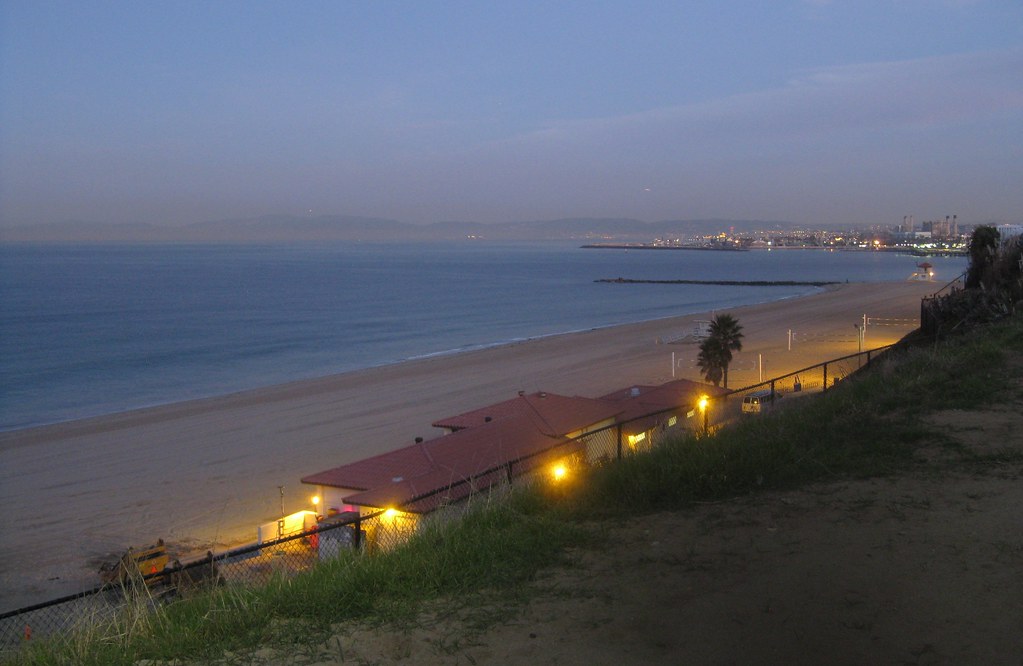 I stayed for a few minutes, then decided I might as well catch the sunrise while I was out. The closest place I could think of that had a clear view of the east was the hill I’d crested earlier, which had a good view…except for the the skeletal towers of a cluster of power transmission lines. I wasn’t the only one out to watch the sunrise, either. Aside from the people walking their dogs in the park nearby, there were two other guys standing around by their cars (carefully not parked near each other), looking at the eastern horizon. 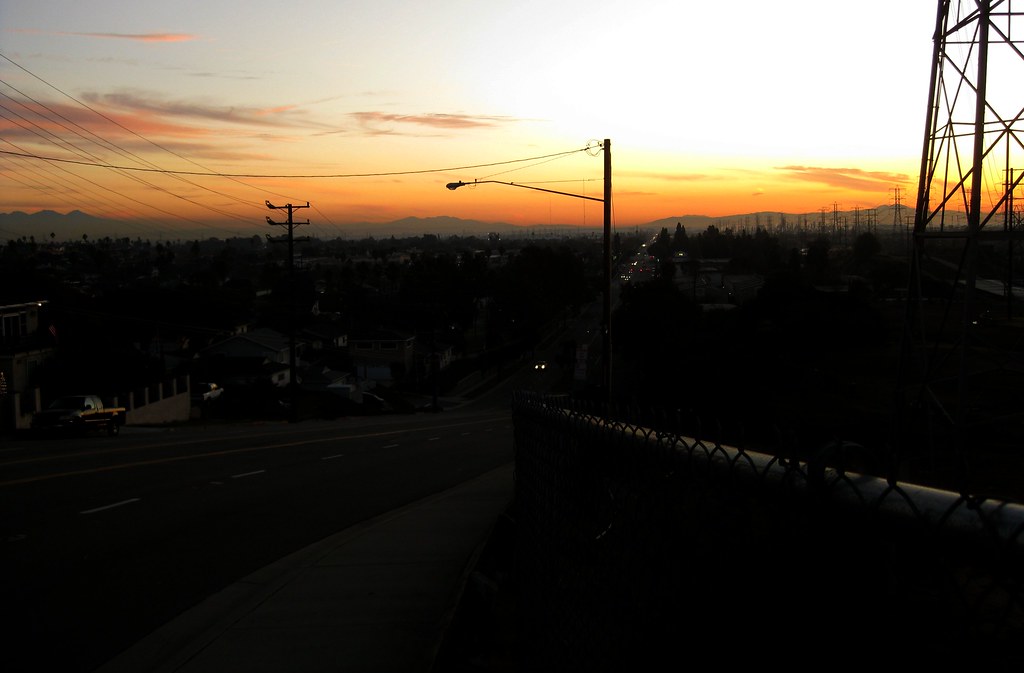 I’ve always found it interesting that you can see distant mountains silhouetted at dawn and dusk that you can’t see during the day. The San Gabriels at left are often visible from the South Bay (just as they are from Orange County), but it’s rare to be able to see Saddleback from out here. And the mountains in between? Very rare. I think they’re the San Gorgonio range.

If you look carefully in the higher-res version, you can see that there’s another mountain sticking up behind the Santa Ana Mountains, near the north/left end of the range. I’m not 100% certain, but I think it’s San Jacinto!

Anyway, I walked a little ways down the hill to where the towers didn’t block the spot where the sky looked brightest, and waited. It wasn’t very long — I’d cut things pretty closely — before a bright spot appeared just a little above the horizon. Oddly, it looked like it appeared between the horizon and the tops of the mountains south of Saddleback, which I chalked up to the same sort of refraction that causes the sun to look higher than it actually is. 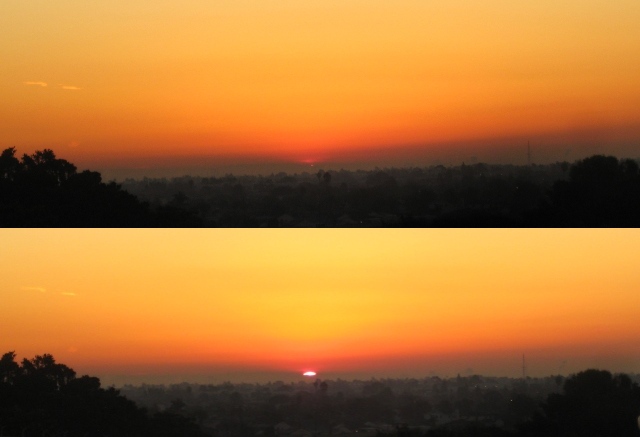 After the sun cleared the mountains, I stared to head back to my car, when one of the guys asked me, “You’re here for the eclipse, right?” It turned out that he’d misunderstood an article describing where and when to look, and so he went out to a spot with a view of the eastern horizon a little after 6:00. The moon had been behind him (and a hill) the whole time. I showed him some of the photos I’d taken earlier, so he at least got to see them second hand, and then we both drove off.

As I drove home, I noticed other people out just looking at the view. At one point I caught a glimpse of Downtown Los Angeles, with several skyscrapers reflecting the sun like columns of light.

I’m not usually up that early in the morning these days, especially not on a weekend. I’m more of a night owl. But sometimes I can definitely see the appeal.