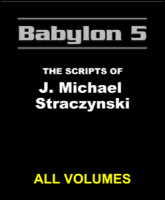 I just got an email with the reminder that J. Michael Straczynski’s Babylon 5 Script Book Series is going out of print at the end of the month. Monday, June 30 is the last day.

It’s hardly a surprise, since the series was always advertised as a limited edition.

The weird thing is that they’re also shutting down the related store, with all the quote merchandise, until August. Presumably that includes the Londo/G’Kar campaign signs as well.

Meanwhile, the companion series, Other Voices, with scripts and commentary by the other writers who worked on the show, just released the second book. (To give you an idea of just how much of B5 JMS wrote, his scripts take up 14 volumes. The others add up to just 3.) It’s been interesting to compare the different styles of commentary. Some wrote epics, some did Q&A or interview-style introductions, and David Gerrold simply wrote half a page about why he resisted writing “Believers,” and what he did when he realized exactly why they wanted him to write it.

I hate to admit it, but I’ve only just started reading the bonus volume of the original set last weekend (in between bouts of re-reading The Ringworld Throne and writing). After so many years wondering “what would have happened if Sinclair had stayed?” you’d think I’d be in a bigger hurry to find out. Okay, I was busy with the whole moving thing, and then unpacking, and then trying to catch up on a fan site, and then trying to launch a blog, and I keep getting sucked into comic forums…

I think I need to sleep more.

4 thoughts on “B5 Script Series Shutting Down”