“Preview Night” is about as accurate as “Comic-Con” these days.  They might as well call it a 4½-day convention. Wednesday night was surprisingly crowded (though it’ll get a lot worse by Saturday), and it started from the moment we arrived at the convention center.

It took an hour and a half on the freeway to come within sight of the buildings of Downtown San Diego, and possibly another half hour to make it to our hotel.  Once we checked in, we set about unpacking for our 4-day stay, then headed over to Dussini for dinner.  Afterward, we went straight to the convention.

This is the first year we’ve stayed somewhere close enough to the convention center to walk, and it was very nice not to have to wait for a shuttle or a trolley — either going to the con or coming back to the hotel.  Of course, since you can only cross the tracks at either end of the convention center, that means you need to walk at least half the length. 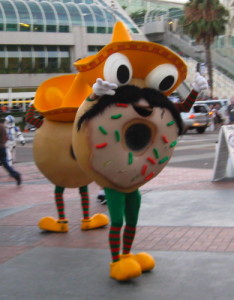 Our first hint of con culture came on the walk from the hotel to the restaurant.  Someone dressed as a giant donut in a sombrero was walking the streets as part of a promotion for some movie.  [Edit: apparently the movie was Sex Drive.] A little boy of around 5 or so turned to his mother and said, “I don’t like him.”  Kid, you’ve got the right idea.

We arrived at the convention center around 7:45 and discovered two disturbing things:

The big usable promo items this year seem to be the giant Wonder Woman bags (following up on the Superman: Doomsday/Smallville bags from last year, which makes me wonder how long it’ll be before we see them converted into aprons, dresses, etc.) and the giant “Big Frakkin Bag” — which is a big purple bag with the words “Big Frakkin Bag” on the side. 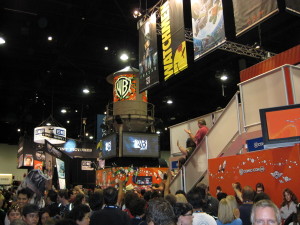 Katie noticed that it seems to be all about buying stuff today — being the first to get some item, etc. Partly because everything’s discounted, and partly because there’s essentially nothing else to do until programming starts tomorrow.

I went straight to the Image booth to see what I could find out about the Tori Amos signing — it turns out there was a snafu with getting the books, and the organizer of the event was really annoyed that several boxes had gone missing.  The first however-many people in line, after the one box ran out, got vouchers instead.

I also went over to Colleen Doran’s table, talked with her briefly, and bought a set of Reign of the Zodiac, which she signed for me.  I’d brought Orbiter and A Distant Soil, vol.1, but managed to leave them in the hotel.

I didn’t spot the DC booth until right before closing, but I noticed something interesting: all the staff were wearing Flash symbol T-shirts. (This probably doesn’t mean anything — they’ll probably all be in GL shirts tomorrow, Wonder Woman on Friday, Superman on Saturday, and Batman on Sunday. But I found it interesting.) I also spotted Ethan van Sciver as he drew a sketch for the last person in the line. 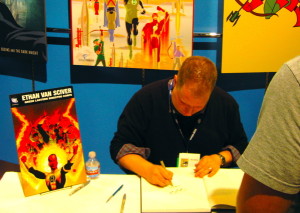 Edit: In the time it took me to write this, Katie crocheted herself a lanyard for her badge.

One thought on “Wednesday Night in San Diego”