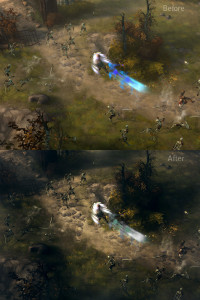 Well, probably not, but the complaints over color in Diablo III — specifically that it has some — have got to be the silliest controversy I’ve seen in a long time.

Fans even went in and recolored the screenshots to show what they think it should look like. The link above is an article where one of the game designers goes through and, over and over, points out, “Sure, you might like that better, but it interferes with gameplay.” You know, things like being able to tell the skeletons from the zombies — or from your teammates in a multiplayer game.

Oh, and to the fan who captioned a (relatively) colorful shot with “wow gayness” — I believe the word you’re looking for is gaiety.

(via Comics Should Be Good)