You may have noticed I’ve been looking for a smartphone for a while, and looking at the T-Mobile G1 more or less since it was announced. Well, I finally went for it. I was going through piles of papers on my desk and realized I had almost enough cashback bonus on one of my credit cards to cover the upgrade cost. And I was already seriously considering adding a data plan in order to put Opera Mini on my RAZR.

So I went down to the nearest T-Mobile store, asked about a couple of issues that hadn’t turned up in my previous research, and got the last one in stock. There was a couple there before me looking at them, but they said they weren’t ready to buy, just researching. 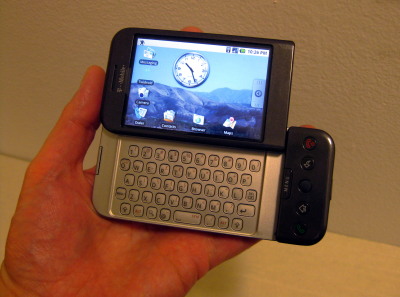 It took me about an hour to activate the phone, mainly because I didn’t have a data plan beforehand and it can take that long for a new plan to take effect. Once I did, I started experimenting with it. (Unfortunately this meant a lot of the things I was going to do this afternoon…didn’t get done. Oh, well.)

Stuff I Have Not Tried But Intend To

5 thoughts on “The G1: First Impressions”